After some West Bank farmers were barred from bringing their goods into Jerusalem, it seems the Palestinian conflict is moving more to the economic sphere than to the political one. 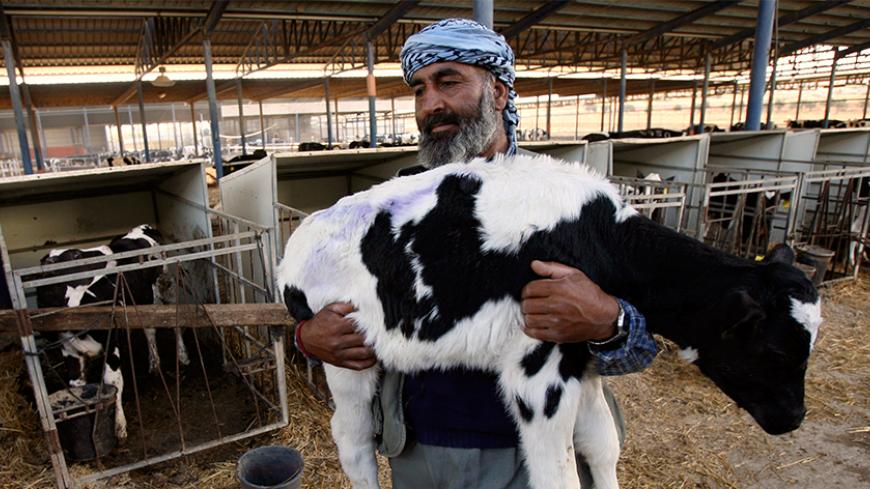 A Palestinian farmer carries a calf on a dairy farm in the West Bank city of Hebron, July 22, 2009. - REUTERS/Nayef Hashlamoun

Hundreds of Palestinian dairy and meat farmers find themselves caught in a political struggle between Israel and the Palestinian authorities.

The problem of Palestinian farmers began on March 10 when Israeli troops barred trucks belonging to the five leading Palestinian dairy and meat companies from entering into Jerusalem. Trucks from Hamoda dairy company were coming from Hebron, and the order was applied to four other companies.

Kamel Mujahed, head of the Palestinian Milk Council, which represents dairy farmers, told Al-Monitor that Palestinian farmers are the first to suffer from this Israeli decision. “Fifty percent of our sales are to consumers in Jerusalem, and by barring our dairy trucks, our farmers are stuck with a very perishable products.”

It is unclear what triggered the unilateral Israeli decision that was implemented without an official announcement or justification. But Jamal Dajani, director of strategic communications at the Palestinian prime minister’s office, told Al-Monitor he believes politics are behind the Israeli decision. “It seems that this act is done in retaliation on the voluntary public Palestinian ban of illegal settlement products and an attempt to further exercise sovereignty over East Jerusalem.”

Ameer Haddad, head of sales at Hamoda, says that the political issue came up in a new document that Israel sent to the Palestinian Ministry of Agriculture. “Apparently, in the document, Israel inserted the term that Jerusalem is the capital of Israel,” Haddad told Al-Monitor. The document has not been made public.

East Jerusalem, which was occupied by Israel in the June 1967 war, was unilaterally annexed to Israel and has been subject to Israeli civilian law since 1968. Palestinian companies have been able to sell their products in East Jerusalem within the limitations imposed by the Paris Protocol agreement that was signed in 1995 following the 1993 Oslo Accord.

The unilateral Israel act carried out by Israeli troops at the Betunia crossing near Ramallah is a repeat of a similar attempt back in 2010. Haddad told Al-Monitor that the Israeli decision to bar Palestinian dairy and meat products was reversed due to international pressure. “They tried it back in 2010, and at that time international pressure, including by the Quartet’s Tony Blair, resulted in the shipment of products being restored,” he said.

The trade relations between Palestine and Israel are largely in favor of Israel. Haddad scoffs at press reports that Palestinians are boycotting Israeli products. “This is just for public consumption and rising nationalist sentiment,” he insisted. According to a Bank of Israel report in 2012, “Palestinian purchases from Israel account for about two-thirds of total Palestinian imports.”

On March 13, the independent Palestinian Maan news agency quoted an anonymous source at the Palestinian Ministry of Economy saying that the decision was illegal in terms of bilateral agreements. “The ministry is looking into the case, which is a flagrant breach of Paris Protocols,” the official said. He was referring to the agreement signed in Washington in 1995 between the Palestinian Liberation Organization and Israel that set procedures and regulations governing economic relations between the West Bank and Israel.

Palestinian lawmaker and Secretary-General of the Palestinian National Initiative Mustafa Barghouthi said March 13 the Palestinian Authority (PA) should respond to the Israeli decision by banning entry of Israeli products into Palestinian markets. “The Israelis are mistaken in thinking that the measure can break the boycott and divestment movement and the sanctions against Israel,” he said.

A statement issued by the Palestinian government after the March 15 Cabinet meeting condemned the Israeli action saying the Israelis are attempting to monopolize trade. “The occupation aims through this latest decision to monopolize Israeli products in the East Jerusalem market with the aim of hurting Palestinian products. If this continues, it will lead the Palestinian government to take a decision to treat Israeli products in the same way as a response to this arbitrary act.”

Israel’s liaison director with the West Bank at the Ministry of Agriculture didn’t respond to email or phone requests by Al-Monitor. Israeli media was also unable to get an official response to the decision against Palestinian companies.

The Jerusalem Post reported that Israel’s Cabinet made a number of decisions March 10 against Palestinians hours after US Vice President Joe Biden left Israel’s Ben Gurion Airport. The decisions included the completion of the Israeli wall built around Jerusalem from the northern and eastern sides, which connect Jerusalem to the Palestinian areas.

The Palestinian struggle for independence is largely a political one, but with the upsurge in calls for limiting Israel from benefiting from the occupation through boycotts and international demands to label settlement products, it appears that the struggle is being fought economically. Israel, however, might lose much more than it gains if it insists on preventing a small number of Palestinian farmers and companies from trying to export their products across Israeli checkpoints. With the issue of East Jerusalem being so contentious in the Palestinian struggle, acts against Palestinians in Jerusalem are more likely to backfire than to be a deterrent.