Israeli farmers are growing increasingly anxious over a decision by the Palestinian Authority to ban the import of calves from Israel. 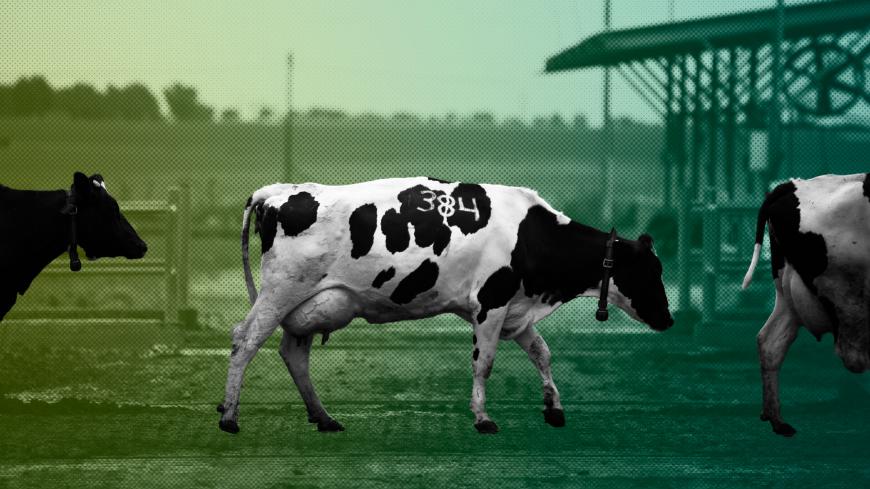 The Israeli-Palestinian conflict is far from resolution, but economic cooperation between Israel and the Palestinians is flourishing. For instance, agricultural products from Gaza, including tomatoes and eggplant, are sold on the Israeli market in huge quantities. Gaza fishermen sell to the Israeli market during certain seasons. Israel also helps Gaza merchants to a certain extent to export products to markets around the world. From the other side, Israel exports a lot of products to Gaza and the West Bank. By virtue of the Paris Economic Protocol (1994), the Palestinian economy in the West Bank and Gaza is in effect based on the importation of products from Israel.

Under the existing economic arrangement and situation, the Palestinian meat market, estimated at NIS 700 million ($197 million) a year, depends primarily on imports from Israel. Dozens of Israeli farms, mostly on kibbutzim, sell fatted calves (weighing 500 kilograms, or 1,102 pounds) for slaughter to butchers in the West Bank.

“We sell to the Palestinians because the Israeli meat market is a very difficult market,” Avshalom Vilan, secretary-general of the union of Israeli farmers and a former Meretz Knesset member, explained to Al-Monitor. “The duopoly of [food makers] Tnuva and Dabbah controls the market and import of large calves. The market wants nothing to do with us small farmers. Because of the development of imports of frozen kosher meat from Europe, it’s not worthwhile for us to sell calves to the kosher market. What’s left for us is the Palestinian meat market.” Since September, however, the Palestinian Authority (PA) has prohibited the importation of calves from Israel.

“We’re stuck with tens of thousands of calves, in which we invested tens of millions, which have reached the weight when they’re ready to sell, and we can’t do anything with them,” Doron Beidich, chairman of the association of calf raisers, told Al-Monitor. “A whole economic branch that provides for hundreds of families is on the brink of collapse. We’re talking about 400 families and 5,000 people employed indirectly who make a living from this industry —drivers, operators of calf food storages, logistical workers, and more.” Based on information obtained by Al-Monitor, it appears that the gross profit for each calf sold on the West Bank is about NIS 700-800 NIS ($197-$225).

The PA's decision to ban the purchase of calves from Israel is reportedly part of a drive led by Prime Minister Mohammed Shtayyeh to disengage from the Israeli economy, but some Israelis doubt this claim. “It’s not a diplomatic story,” Beidich asserted. “It’s a mafioso story entirely. We’re in touch with Palestinian merchants who buy calves from us, and the story is very simple: There are a few big merchants who decided to take over the market and bribed people in [Palestinian President] Mahmoud Abbas’ office. Beyond that, they are working in contravention of the Paris Protocol. They are damaging an entire industry of Palestinian merchants who have worked with us for years and make a good living.”

According to Beidich, the claims of encouraging the Palestinian economy are nonsense. “Patriotism is the refuge of the scoundrel,” he said, quoting Samuel Johnson. “But anyone who is familiar with this issue, knows this has no basis, since they continue to acquire from us the entire infrastructure for raising calves — food, veterinarians, technology and transportation — so there’s no real boycott here.”

“The Palestinian talk about disengaging from the Israeli economy is ridiculous,” Sami Miari, an expert on the economy of conflict from Tel Aviv University, told Al-Monitor. “Not only does the Paris Protocol prevent such a disengagement, reality prevents it. Ninety-two percent of Palestinian exports go to Israel. We’re talking about a closed ‘dual economy’ market. The boycott of Israeli calves is cosmetic, since in any case the Palestinians need Israel in order to import calves from other markets. If the Palestinians really want economic independence, they need to open the Paris Protocol and demand from Israel real opportunities to conduct economic ties with global markets.”

Ali Fodi, an Israeli Arab from the village of Reina in the north, has worked for years as a driver transporting calves from Israel to the West Bank. “The Authority wants to market this as a diplomatic-political story, but it’s really not,” he told Al-Monitor. “It’s a story about a few mafiosos from Ramallah, Bethlehem and Gaza, who are connected to the Palestinian Authority and decided to take over the market. In September they stopped imports from Israel, and now they import [calves] from Portugal and Hungary. Then they sell them at high prices on the Palestinian market. We sold at 15 NIS [$4.20] a kilo, and they sell at NIS 20 [$5.60] a kilo. They think the Jews are damaged by this story, but it’s a story about the exploitation of thousands of Palestinians. These Palestinians can’t talk because they’re scared, so I speak for them.”

Miari, who said he is not knowledgeable about the internal Palestinian intrigue, offered another interpretation of the Palestinians' actions. “In recent months, Abbas learned that he has the ability to bargain economically with Israel,” he claimed. “Only recently did he manage to get a tax exemption for fuel that the Authority acquires from Israel and forced the Israelis to open the Paris agreement for the first time. The boycott on calves from Israel, more than reflecting a desire to boycott, perhaps shows a Palestinian move to improve their position in all that’s related to economic agreements with Israel.”

In the meantime, Israeli farmers are growing impatient. On Oct. 15, they traveled in a caravan to Jerusalem in cars wrapped with signs reading, “BDS with the help of the State of Israel,” invoking the Boycott, Divestment, Sanctions movement and demanding that the prime minister do something. A short time later, Gen. Kamil Abu-Rukon, Israeli coordinator of government activities in the territories, announced that if the Palestinian boycott continues, Israel will respond with its own boycott, prohibiting Palestinian products from entering Israel.

“The State of Israel could stop this whole story in one instant,” said Vilan. “In the Paris Protocol, it was agreed to allow free passage of agricultural products. If the Palestinians don’t honor the agreement, Israel doesn’t have to honor the agreement, and it could stop Palestinian imports to Israel as a response.” Indeed, last December, Agriculture Minister Uri Ariel thwarted a similar Palestinian initiative when he announced that he would in turn halt imports of Palestinian agricultural products into Israel.

The scenario Israeli growers fear is that in the end, they will be forced to lease their farms to Palestinian importers, who will raise the calves themselves.

“Today there’s a phenomenon of property owners who have had to lease their farms to Tnuva and Dabbah … because the monopoly finished them,” Beidich said. “The current move could cause property owners to lease their land to Palestinian businessmen and to turn into their tenant farmers. For us, it’s going back to the time when my grandfather came to Yehoshua village to farm lands that were bought by Yehoshua Henkin [the Zionist activist responsible for most Jewish land purchases in Ottoman Palestine] from an effendi sitting in Damascus. This is not why we’ve invested in Israeli agriculture for three generations.”