The recent Gaza war has seen a boost in support for a local boycott of Israeli goods, but short of alternatives, it is hard to envision how such a boycott campaign will work. 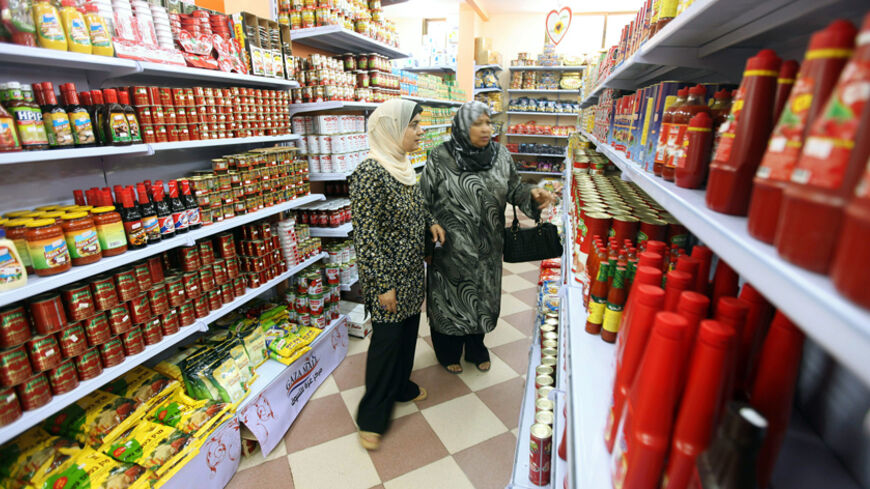 Palestinian shoppers browse in a supermarket at a shopping center in Gaza City, July 20, 2010. - REUTERS/Mohammed Salem

GAZA CITY, Gaza Strip — In a busy fruit shop in Gaza City, it's difficult differentiating between the fruits from Israel and those from Gaza. We had to first ask, “From which city do these mangoes come?” To which the owner replied, “The mangoes are from Acre.”

We asked again, “And the dates?” “From Israel, our occupied lands,” he answered. “The peaches?” we asked. The shop owner said, “All of this is from Israel — mangoes, dates, bananas, parsley, peaches, squash, tomatoes and oranges, but they are from our lands there. Our customers like these types of fruits, even if they have a substitute from Gaza.”

The difference is obvious. Mangoes from Gaza are big and green and from Israel small and golden.

In supermarkets, Israeli products are easy to spot. They were stacked on the shelves for the 51 days of war. People are spontaneously boycotting the Israeli products and not just the elite who purposely stopped buying them.

Anwar Abu al-Kass, owner of a popular supermarket in Gaza, told Al-Monitor: “During the war, we noticed that the customers were boycotting Israeli products and a number of activists came in and placed boycott stickers on them. Indeed, we stopped selling Israeli products such as chocolates and detergents and we substituted them with European and Turkish products.”

“There are still certain essential goods that are indispensable for Gazans such as dairy products,” Kass added, noting that after the war ended, locals gradually started to buy Israeli products again.

The manager of a shopping center in Gaza, known as Abu Yazin, said, “In a nutshell, I cannot boycott Israeli products in our shops. The customers are the ones who should boycott, not us.”

During the war, many youth groups called for the boycott of Israeli products and distributed boycott stickers to shops and import companies.

Blogger Farah Baker mentioned that she participated in the “16% campaign,” which is the percentage given to the Israeli army from the products’ price. She told Al-Monitor: “During the announcement, I said that the occupation is giving us poison for bread and blood for water,” noting that the money paid for food and water is being used to buy weapons.

“When I went to shops during the war, it was the first time I ever heard people say things like ‘Is this an Israeli product? I want a local substitute, I do not want Israeli yogurt.’”

Raed Fattouh, coordinator of supplies for Gaza, told Al-Monitor, “Around 30-50 trucks loaded with fruits and vegetables enter Gaza every day. However, other Israeli products represent 50-60% of Gaza’s imports.”

Fattouh explained that during the war, 100-200 trucks used to enter Gaza every day, loaded with essential goods such as fruits and dairy products, in addition to the aid donated to the Gaza Strip. He also noted that trade crossings were open during the war except for two days.

A local resident told Al-Monitor while leaving a shop: “My wife has nothing to do with politics, but has now insisted on boycotting Israeli products because of the war. She kept insisting on her stance and even stopped preparing the pizzas that we love because the main cheese used in them is Israeli.”

The 1994 Paris Agreement states that Israeli agricultural, industrial and food products are free to enter the Palestinian lands while there are restrictions on the entry of Palestinian goods to Israel.

An official source from the Ministry of National Economy, who refused to give his name, explained to Al-Monitor the obstacles preventing the Palestinians from officially endorsing a boycott. “It is difficult for any Palestinian government to take the decision to prevent importing Israeli products due to the local merchants’ interests. Such a decision could also lead to starvation,” he said.

“Dairy products have no substitute here, since the quantities from the West Bank do not cover the Gaza Strip’s needs,” he added, noting shelling had caused the destruction of factories and agricultural lands, before flooding the market with its own products.

The source emphasized that the only solution is to encourage other direct imports, instead of relying on Israeli imports. He said, “However, the merchants will find it risky and will have to bear its high costs and the fact that the occupation will purposely try to impede such imports.”

During an interview with Al-Monitor, Amjad al-Shawa, the head of the nongovernmental organization network and member of the Boycott, Divestment and Sanctions Movement (BDS), said: “Our vision of the boycott is comprehensive. When the Gaza Strip was receiving aid during the war, we announced that no products should be Israeli, and our demands were met.”

Shawa emphasized that the boycott is not only a matter of behavior but a matter of principle, noting the importance of it being strategic and not interim, since the occupation seeks to make its products a part of the society’s culture in Gaza.

“During the war, the occupation shelled around 500 factories in the purpose of only having its own products on the market without competition. Of course, certain Israeli products are indispensable since there are no substitutes for them, such as the shekel currency in light of the absence of any national currency,” he said.

On the subject of possible solutions, Shawa said, “The national authority’s role is to improve the quality of national products, completely lifting the siege of the Gaza Strip; becoming open to Arab and international markets; developing communications between Gaza and the West Bank; and finally, never underestimating the role of the citizen in the boycott.”

During a seminar organized by the Palestinian Institute for Communication and Development on Sept. 15, and attended by Al-Monitor, Haidar Eid, an official in the national boycott campaign, said, “During the war, many achievements for the academic and cultural boycott that started in 2004 were accomplished.”

“For the first time in the history of the struggle, we are witnessing a significant number of music and Hollywood stars sympathizing with the Palestinians and accusing Israel of committing genocide in Gaza. One of these stars was the Spanish actor Javier Bardem,” he said. “This is our South African moment, as my good friend Omar al-Barghouti, head of the national boycott campaign, calls it.”

But short of alternatives for Israeli products, the boycott campaign might find it difficult to stick in Gaza, despite local support.