The Palestinian boycott of Israeli products sold in the West Bank might help strengthen the Palestinian economy, and draw the world’s attention to the Israeli occupation. 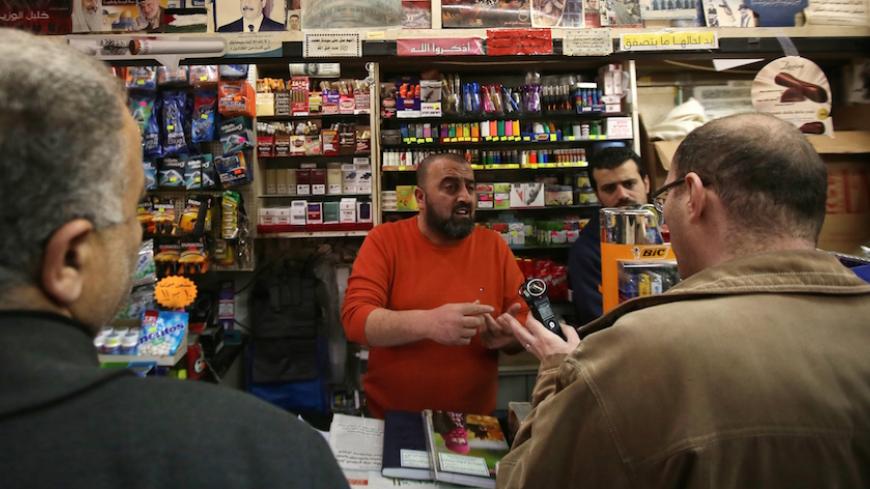 Fatah supporters talk with a shopkeeper during a visit to persuade retailers not to sell Israeli goods in the West Bank city of Ramallah, Feb. 24, 2015. - ABBAS MOMANI/AFP/Getty Images

A boycott declared by Palestinian organizations of six Israeli companies and fruits imported from Israel that have a Palestinian alternative appears to be holding despite some challenges. The decision issued Feb. 9 by a coalition of the main PLO factions called for the boycott of six major Israeli companies: Tnuva, Strauss, Osem, Elite, Prigat and Jafora. Palestinian stores were given two weeks to empty their shelves of the boycotted Israeli products. An attempt by the Israeli dairy company Tnuva to deliver new supplies to Ramallah on March 2 was met with activists destroying the contents in Manara Square in the center of Ramallah.

Palestinian annual imports from Israel amount to $4.2 billion. The decision to boycott the Israeli companies followed continued Israeli decisions to withhold Palestinian tax monies totaling more than $100 million monthly. It wasn’t clear whether the call for a boycott will be eased now that the Israeli government has agreed to release the tax monies; although the actual release has yet to take place following the Israeli decision to use some of that money to offset bills due to the Israeli electricity company.

A visit by Al-Monitor to various supermarkets in Ramallah this month showed none of the targeted products on display. Some shop owners told Al-Monitor that they are smuggling popular products for their loyal customers, but that doesn’t seem to happen in large numbers.

Although much of the news coverage has focused on Ramallah and the nearby town of al-Bireh, the boycott has been publicly supported throughout the West Bank. The local press is actively raising awareness and supports the boycott that includes schools and communities that interact with merchants, who are vulnerable to financial losses because of the boycott.

Besides the boycott of Israeli grocery products, Palestinian vegetable and fruit sellers are also called on not to stock Israeli products that have a local alternative. While Palestinians produce vegetables that cover local needs, the absence of Palestinian fruits is a problem. With the exception of watermelons and grapes, most consumed fruits are imported from Israel.

The Palestinian boycott of these six companies will do little to make a dent in the huge imbalance in the trade exchange between Israel and Palestine. These companies' products represent less than 3% of the overall $4.2 billion imported annually from Israel. But the boycott by Palestinians of their occupier's products will have significant influence on the international boycott, divestment and sanctions (BDS) movement. The BDS movement is already recording impressive victories around the world.

While locally much attention is given to products sold in supermarkets and produce markets, the bigger question about the very foundation of the economic relations between Palestine and its occupier continues to haunt the Palestinians. The economic occupation of Palestine is no less harmful to Palestinian national aspirations than the political one.

Palestinian companies that are taking the place of Israeli companies depend on Israel for some of their raw products. One Palestinian shop owner in Ramallah told Al-Monitor that there are very few milk producing farms in the occupied territories, which means that Palestinian dairy companies are producing products with milk from the same Tnuva company that Palestinians are boycotting.

While the efforts by Palestinians of boycotting Israeli products make clear their abhorrence of the continuing occupation, going into its 48th year in June, it will most probably not produce the desired results. But this nonviolent act of resistance coupled with other political and international efforts collectively could help produce a change in the way the world views Palestine and the illegal Israeli military occupation of it.

At the same time, the boycott can help invigorate Palestinian efforts to strengthen their own economy and gradually work toward a divorce from Israel.