As part of its efforts to economically disengage from Israel, the Palestinian Authority seeks to establish bilateral relations with Russia in the energy field. 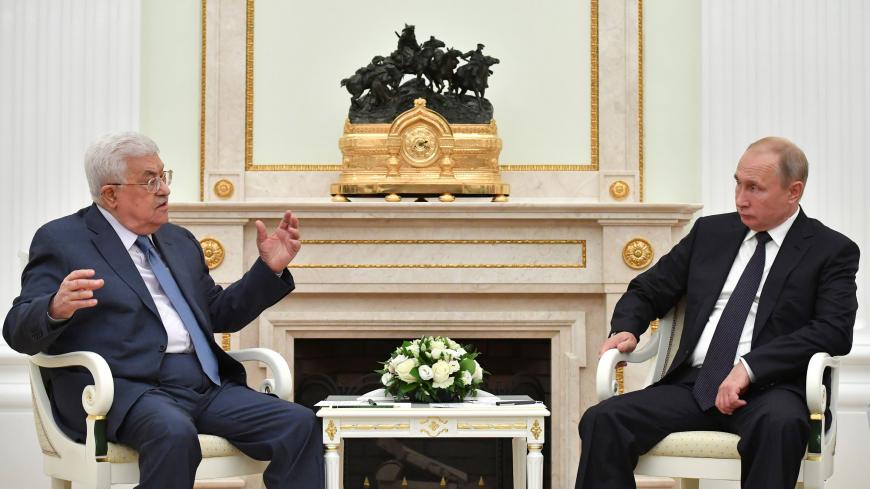 RAMALLAH, West Bank — The Palestinian government is seeking to increase cooperation with Russia in the field of energy and oil derivatives in a bid to benefit from Russian expertise and potential. This comes as part of the Palestinian government's strategic plan to economically disengage from Israel, which it announced last May.

During the annual conference of the Palestinian-Russian Joint Committee, held in Moscow Nov. 21-22, the two countries signed their largest package yet of new bilateral agreements between the public and private sectors, including in the fields of economy and trade, industry, agriculture, information technology, energy, tourism, employment, education and investment.

During the committee’s discussions, Russian companies working in the field of oil, energy and oil exploration expressed interest in working in Palestine.

Chairman of the Palestinian Energy Authority (PEA), Zafer Melhem, told Al-Monitor that the PEA will sign a memorandum of understanding with the Russian side within weeks. He didn't mention any specific date.

In November 2018, the PEA and the Russian Ministry of Energy signed an agreement on energy cooperation to encourage the Russian private sector to invest in Palestine in the fields of energy and to establish investment projects.

Melhem said the 2018 memorandum included a clause indicating that Russian companies are assisting Palestine in the exploration of oil, hydrocarbons and oil derivatives. "We are waiting for the implementation of what was mentioned in the agreement and taking practical steps," he said.

He added, "We hope the Russian companies, with their capabilities and experts, will help us conduct necessary geological studies, whether via satellites or other technologies, to determine our oil fields and the quantities they contain, in addition to training Palestinian crews in the fields of regular and renewable energy as well as the exchange of statistical data in the energy fields."

During the joint committee discussions, the Palestinian side called on Russian companies to participate in all investment tenders in building power generation facilities, environmental protection, oil and gas exploration, and work in renewable energy.

In a Nov. 22 statement, the Palestinian National Economy Ministry published details of the committee's discussions, affirming that the state-owned Russian oil and gas Zarubezhneft company expressed its desire to establish a partnership in the oil and gas sector with Palestinian companies. Also, Rosneft Oil Company expressed its willingness to cooperate for bids in the fields of supplying and installing power lines and substations, and the supply of oil installations and pipelines.

The ministry also confirmed that Russian Rosgeo oil company has also expressed its willingness to cooperate with the PEA, government departments and companies in the field of hydrocarbon geological exploration of solid minerals and groundwater, to evaluate and explore geothermal energy capabilities and to assist the Palestinian side in the areas agreed upon through tenders.

The Palestinians aspire to get Russia's help and support in building an electricity transmission station north of the West Bank, as the Palestinian side handed over its Russian counterpart information and a proposed plan to construct the station and provide all facilities to the Russian side to implement the project.

Palestinian Minister of Economy Khaled al-Osaily told Al-Monitor that the Palestinian government aims to develop the economy by all means, and it seeks to develop economic and trade relations with Russia in all fields.

“We seek to raise the level of trade and economic cooperation with Russia, opening the markets of the two countries to products and providing support to export Palestinian goods and products to Russia, import directly from Russia without intermediaries, and encouraging Russia to invest and help build industrial cities and help train our staff," he said.

President Mahmoud Abbas and Prime Minister Mohammaed Shtayyeh support rapprochement with Russia, not to reap economic and commercial gains, but rather to develop Russia's political position on the Palestinian issue, in light of the deterioration of the Palestinian Authority’s relationship with the United States and the prospects for the peace process being blocked.

Abdel Hafiz Nofal, the Palestinian ambassador to Russia, told Al-Monitor, “Russia is a friendly and supportive state to us. Today, we celebrate the 45th anniversary of the opening of the representative of the Palestine Liberation Organization in Russia, and 31 years since Russia recognized the state of Palestine and has been supporting over the past years of our rights to establish a Palestinian state on the 1967 borders.”

He stressed that Abbas is in constant contact with Russian President Vladimir Putin, in an attempt to find an international formula to foster the peace process, rather than the unilateral US sponsorship.

Nofal said, “There is talk in Russian political circles about a possible visit by President Putin to the Middle East region [next year]. Consequently, if this visit takes place, he will surely visit Palestine."

He continued, “The cooperation with Russia is in the government's plan for the gradual disengagement from Israel, where during the meetings of the joint committee, several issues were discussed, [such as] the energy and fuel file, as part of the government's quest to find alternatives and options for the energy that is imported from Israel.”

The Palestinian Authority hopes that this rapprochement with Russia will result in the development of various aspects of cooperation and economic and trade relations. The previous Palestinian government signed in March 2014 a decision to put up an international tender for oil exploration in the West Bank, on an area of ​​432 kilometers (268 miles), but failed to attract international companies.