Egypt government to require use of fuel subsidy cards

The Egyptian government, in an effort to eventually reduce fuel subsidies, plans to start requiring the use of fuel subsidy cards to keep track of the fuel consumed by each vehicle. 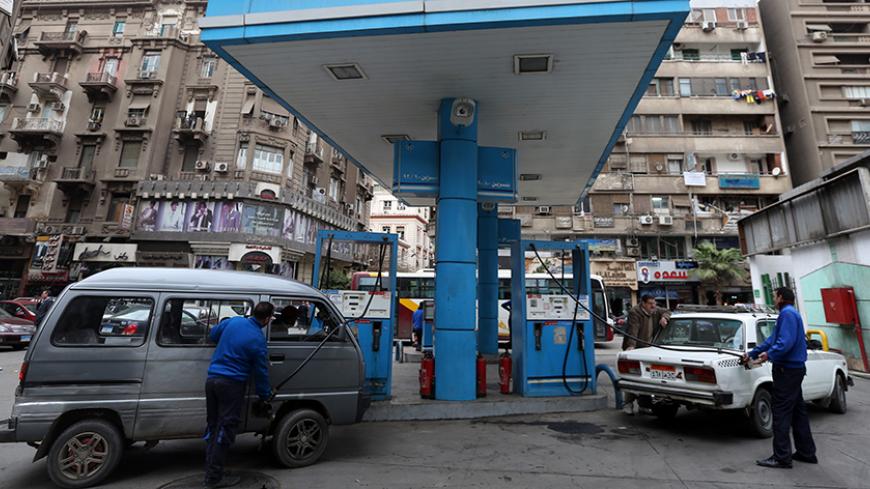 CAIRO — Egypt plans to start requiring the use of fuel subsidy cards in mid-June in a preliminary step toward restructuring energy subsidies, which are costing the government about 100 billion Egyptian pounds ($13 billion) this fiscal year.

Owners of vehicles of all types will not be allowed to fill up on fuel without the smart cards.

The Egyptian government said April 28 that starting in mid-June, fuel cards will have to be used for any type of vehicles, be they private cars, taxis, buses, public transportation vehicles, or tourism or school buses. The e-finance company, tasked with building a system for recording the use of cards, started distributing cards to citizens in April 2014. By mid-June, citizens will not be allowed to fill up their cars without these cards.

Khaled Abdul Ghani, the project director for the fuel subsidy cards at e-Finance, told Al-Monitor that “citizens who did not obtain a fuel card through their car-license administration will have to use the cards available in gas stations.”

Abdul Ghani said private car owners should obtain fuel cards from the traffic management office they are registered with. If someone owns more than one vehicle, that person must obtain a card for each vehicle.

E-Finance started making the cards in June 2013. The government started implementing the smart-card system in Port Said in October 2014, and the system is to be applied to the rest of Egypt by mid-June.

It should be noted that the government aims to reduce petroleum subsidies in the budget of the next fiscal year (2015-16).

On Aug. 11, 2013, both the Finance and Interior Ministries signed a cooperation protocol allowing e-Finance to receive data about vehicles registered at traffic management offices to speed up the process of manufacturing smart cards. The company gets data about vehicles belonging to different provinces to manufacture the cards and deliver them to traffic management offices, which, in turn, deliver them to citizens.

The Ministry of Finance is expected to launch, in cooperation with the Ministry of Petroleum and Mineral Resources and e-Finance, an advertising campaign to publicize the cards, explain how to receive and use them and set dates for their receipt from traffic management offices.

The government is seeking to liberalize the prices of petroleum products within five years. Based on its plan, it started to raise fuel prices at the beginning of July 2014 by about 70 to 75 pennies ($0.09 to $0.10) per liter.

E-Finance has manufactured about 2.5 million smart cards since the launch of the smart-card system in June 2013 in order to distribute petroleum products to citizens. Back then, the company allowed citizens to register their vehicle data on the system’s website. However, due to the lack of public participation, the government stopped registration on the website and allowed the company to obtain data on the vehicles from traffic management units in order to get the information it needed to manufacture the rest of the cards.

As for individuals who acquired smart cards for petroleum products but have not used them yet, Abdul Ghani said that they have to go to gas stations to fill their vehicles with the necessary fuel so that the survey can be as close to reality as possible. If anyone did not receive their card, they can go to gas stations and get one.

The Egyptian government will start implementing the new smart-card system in mid-June to determine the fuel amount needed for each vehicle. This is the first step of the government’s plan to control fuel consumption and determine the amount that can be used by each car annually at subsidized prices. The amount that exceeds this subsidized amount will be sold to citizens at world market prices.