Will Iran’s 50% gas price hike pay off for the economy?

Iran’s cutbacks on gas subsidies must be accompanied by a crackdown on corruption if they are to yield real benefits for the government. 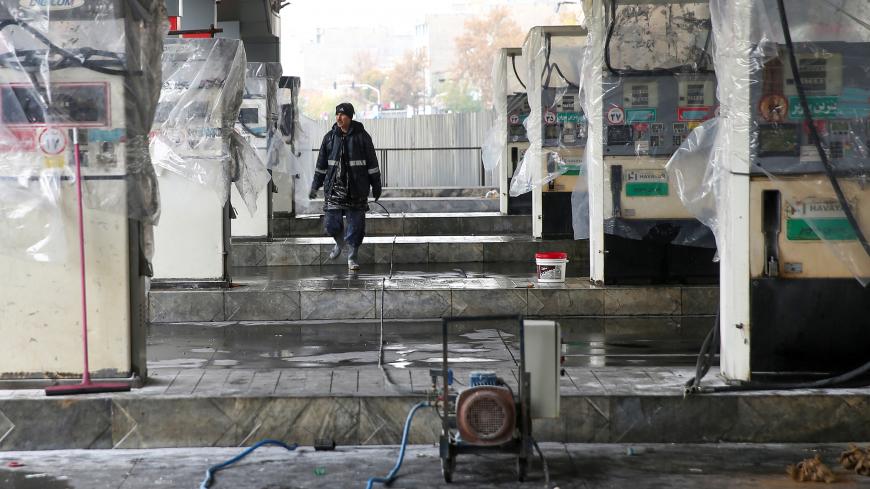 A man walks near the remains of gas pump stands during protests against increased fuel prices, in Tehran, Iran, Nov. 20, 2019. - Nazanin Tabatabaee/WANA via REUTERS

On Nov. 15, Iran announced a shift in its gasoline subsidy policies that led to massive social protests and the unprecedented government response of a weeklong internet shutdown. Though it’s too early to have a complete analysis of the recent wave of anti-government protests, it is valid to argue that the political, economic and social costs of the recent decision were very high.

The question now is whether Iran’s sanctions-hit economy will see benefits that could justify the enormous costs of the political fallout.

At the outset, it is important to underline that some of the potential gains of this new policy have already been undone by the protests. For example, the cost of the one-week internet shutdown could be as high as $2 billion. Nonetheless, one needs to analyze the overall macroeconomic outlook based on the subsidy reforms.

Experts had expected the hike in fuel prices — or rather, the reduction of government subsidies. In fact, this change should be seen as a continuation of the 2010 law on removing subsidies, the second phase of which was implemented in 2014. However, many people were surprised by the timing of this third phase. In a December 2018 story analyzing the introduction of fuel cards, Al-Monitor had predicted this shift, including rationing and two-tiered pricing.

So, what actually happened in economic terms and what could be the motivation?

Yet fuel prices are still heavily subsidized and cheaper than global or even regional benchmarks. The change was made by the Supreme Council for Economic Coordination, which consists of the heads of the three branches of power and determines economic and legal responses to resist external sanctions. Incidentally, in a public speech Nov. 16, Ayatollah Ali Khamenei supported the decision; however, parliamentarians were angered because they weren’t consulted.

In a country such as Iran, the core challenge in announcing such a step in advance is the predictable increase in smuggling activity — hence, the decision to announce and implement it suddenly. Nonetheless, the official communications around the new policy were so weak that protests erupted immediately, especially considering the vulnerable economic conditions.

There were three key economic drivers to change the fuel pricing system in Iran: to contain smuggling, reduce energy consumption and improve the government’s financial position.

As the introduction of fuel cards a year ago indicated, the government was concerned about fuel being smuggled into neighboring countries, which also facilitates money laundering. There are diverse data on the quantity of smuggled fuel, but based on an average estimate of 20 million liters of gas and diesel being smuggled out daily, and benchmarking the old gas price against the new higher one of 30,000 rials, the annual damage to the Iranian economy would have been about $1.3 billion. On top of that, in most cases, revenues generated through smuggling return to the country in the form of imported goods, hence functioning as money laundering for perpetrators. Such smuggling also imposes a heavy burden on local industries and employment in the country.

As for energy consumption, the debates that took place in advance of the 2010 law on removing subsidies produced one key conclusion: The only path to containing consumption in the transportation sector would be through fuel prices. Later studies showed that in the Iranian year 1390 (which started March 21, 2011), fuel consumption in the transportation sector declined by 9.2% compared with 1388, the last year in which old subsidized prices prevailed through the whole year.

Obviously, the relationship between fuel consumption and price isn’t linear; there are many other factors involved including the availability of public transportation, fuel efficiency and the increased use of vehicles fueled by compressed natural gas. Nonetheless, there is a degree of price sensitivity and the government hopes the higher prices will reduce consumption. According to Oil Minister Bijan Zanganeh, the country has recorded a 20 million liter decline in daily consumption of gasoline since the price hikes.

One of the main objectives of the latest reforms is to improve the government’s overall financial position by reducing the cost of subsidizing people’s fuel purchases. According to Vice President Mohammad Nobakht, who heads the government’s Management and Planning Organization, the fuel price hikes will annually inject an additional 300 trillion rials ($2.6 billion at the free market exchange rate) into state coffers, which officials said would then be allocated to citizens in the form of cash handouts. At the same time, the government has revamped the handout system to increase payments to the poorer social classes and discontinue those for richer families. Some 60 million citizens (about 73% of the population) will receive the new higher monthly payment, which has been adjusted based on the number of family members.

Even if the government allocates all of the new resources to cash handouts, it will still benefit from the expected decline in smuggling and, more importantly, the opportunity to export fuel to neighboring markets. In fact, officials in the Ministry of Petroleum expect the country to be able to generate $5.5 billion in annual revenues from exporting the surplus fuel that will be freed as a result of reduced consumption and reduced smuggling activity. This would compensate for some of the loss of crude oil exports as a result of US sanctions.

The short-term socioeconomic impact of gas price hikes could be witnessed during the recent unrest. In addition, there will be an immediate inflationary push as a consequence of the price adjustments. According to Abdolnasser Hemmati, governor of the Central Bank of Iran, the direct and indirect consequences of the price corrections will cause inflation to rise an additional 4%. In the short term, the extra inflationary pressures will further undermine purchasing power and increase economic vulnerability, but in the medium term, the central bank and the government will have to engage in contractionary fiscal policies to prevent major inflationary impacts in the longer term.

From a pure macroeconomic perspective, the decision to adjust fuel prices can be justified. The decision reduces the amount of hidden subsidies in the economy and could pave the way for improvements in many economic phenomena such as energy consumption, smuggling and money laundering. Nonetheless, no matter how one analyzes economic decisions and developments in Iran, the core issue is the government’s inherent weakness. This phenomenon can be seen in how the decision was communicated and how the government and security forces reacted to social protests. Furthermore, the new two-tiered pricing system will also lead to corrupt practices that will create a different kind of black market and undermine economic performance.

Some experts argue that the clampdown on smuggling will be short-lived, because fuel is still subsidized and the smugglers will only regroup and return to their previous methods. This could certainly happen if authorities don’t introduce any other tools to stop smuggling, especially using technology to account for fuel quantities used in production, distribution and consumption.

So while the policy per se is a good one, its success will fully depend on applying the needed governance and operational reforms, which may not happen, as the same corrupt bureaucracy will be in charge of implementing it.