A Palestinian Islamic Jihad delegation recently met with Qatar’s ambassador to the Palestinian territories in a bid to improve relations between the two parties. 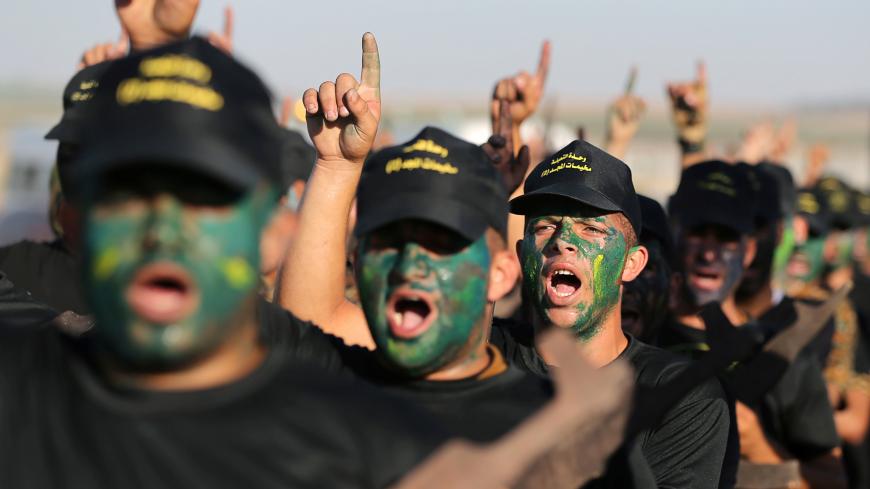 Young Palestinians have their faces painted as they chant slogans during a military-style graduation ceremony at a summer camp organized by Islamic Jihad, Gaza City, Gaza, July 4, 2019. - REUTERS/Ibraheem Abu Mustafa

GAZA CITY, Gaza Strip — Qatari Ambassador to the Palestinian Authority (PA) Mohammed al-Emadi met recently with a high-level delegation from the Palestinian Islamic Jihad (PIJ) at his Gaza City residence. The meeting was the first in months between the parties, since tensions arose between them in May after Emadi seemed to insinuate that the PIJ wants to pull the Gaza Strip into a military escalation with Israel.

He said back then, “Hamas and Israel do not want war, but somebody stoked military escalation on the borders and wants to drag the region into escalation.” He was referring to the Palestinian sniper who shot two Israeli soldiers May 3 in the eastern Gaza Strip. No Palestinian party has so far claimed responsibility.

Emadi’s statements at the time sparked a response from PIJ Secretary-General Ziad al-Nakhaleh, who said during a May 15 press conference, “Although we are thankful to Qatar for offering humanitarian aid to the Gaza Strip, we do not accept the statements of Emadi, who has overstepped his humanitarian mission and is now grading the resistance for its conduct.”

That same day, Emadi issued a press statement saying his words were misunderstood. He clarified, “I respect all Palestinian factions, and I appreciate their sacrifices. I value my special relationship with them, including with the Islamic Jihad, which is key in the Palestinian territories. I have met with the organization and had several calls with its officials during repeated visits to Gaza. They have positive stances that stem from their deep awareness of the stage the Palestinian cause is going through and the wisdom and patience it requires.”

There was another flare-up Sept. 30, when the PIJ blasted Qatar for welcoming an Israeli sports team that participated in the World Athletics Championship in Doha, and called on Qatar and Arab states to halt all forms of normalization with Israel.

Emadi has met with various Palestinian factions during his many visits to the Gaza Strip, though he usually meets with Hamas separately, since it controls the Gaza Strip. The visit Oct. 27 was the first time Emadi sat with the PIJ separately, in an attempt to restore relations, an official close to Emadi in the Gaza Strip told Al-Monitor on condition of anonymity. The official said Emadi had requested the meeting, which was positive and restored ties between the two sides.

Habib said the PIJ doesn't oppose any Arab party or supporter of the Palestinian cause who wants to meet with its leadership. He described Qatar as the Arab country that has offered the most financial aid to the Palestinian people during the 12-year Israeli blockade. In just the past seven years, Qatar’s support for the Gaza Strip exceeded $1.16 billion, according to the Qatari National Committee for the Reconstruction of Gaza.

Khaled Sadeq, editor-in-chief of Istiqlal newspaper, which is close to the PIJ, told Al-Monitor the two sides also met to reach new common ground. Like Habib, Sadeq noted Qatar's financial and humanitarian support to the Gaza Strip and its efforts to reconstruct what was ravaged by recent wars.

Hassan Abdo, a political analyst close to the PIJ, told Al-Monitor the organization's relations with Qatar are also important because the latter helps support thousands of poor families in the Gaza Strip each month, and is working to alleviate Israel's blockade on the Gaza Strip.