Qatar's announcement of $480 million in aid to both the West Bank and the Gaza Strip has sparked fears over the Saudi response to such aid. 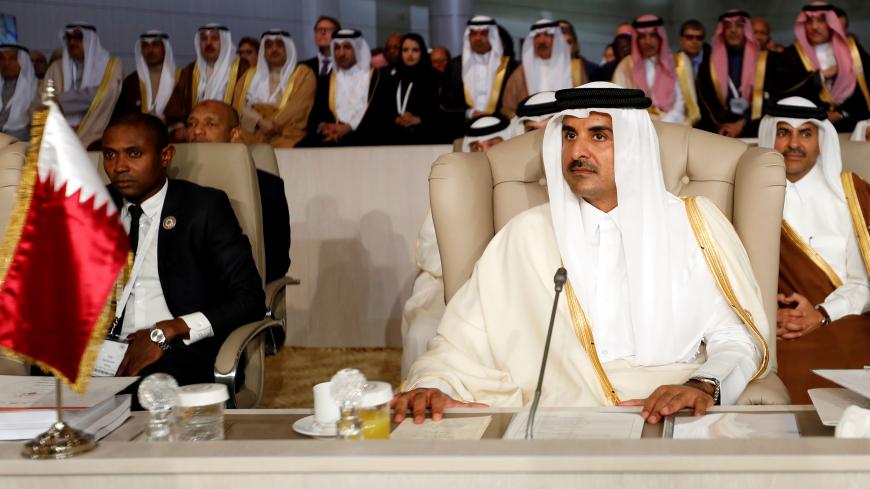 The Palestinian Authority (PA) has been suffering under a severe financial crisis since the US support stopped and Israel deducted money from clearing funds. This prompted the PA to do whatever it could to obtain Arab support calling on the Arab League to provide a safety net or obtain loans from Arab countries — but it failed to get a serious response.

On May 7, Qatar's Foreign Ministry announced $480 million in aid to the Palestinians in the West Bank and the Gaza Strip, $300 million of which went to the PA as grants and loans for health care, education and humanitarian aid, and $180 million for emergency relief, United Nations programs and electricity.

On May 7, Palestinian President Mahmoud Abbas expressed his appreciation to the emir for helping ease the Palestinians’ burdens.

Palestinian Prime Minister Mohammed Shtayyeh explained the same day that the $300 million provided to the PA in the West Bank included $50 million in grants and $250 million that will be provided as a loan to be paid in installments of $21 million per month. He said that $180 million worth of aid was offered to the Gaza Strip.

On May 13, Qatar’s Gaza Reconstruction Committee began distributing cash handouts to 108,000 poor families in Gaza. Each family received $100 as part of the Qatari grant.

Qatari Ambassador to the Palestinian territories Mohammed al-Emadi arrived in Gaza May 13, where he met with Nikolay Mladenov, the UN special coordinator for the Middle East peace process, and discussed efforts to improve the humanitarian situation in Gaza, particularly the electricity supply, relief projects and employment for graduates and workers. The next day, he met with Haniyeh and Hamas leaders in Haniyeh's office in Gaza City and reviewed Qatar's efforts to ease Gaza’s suffering.

Ahmed Majdalani, a member of the PLO Executive Committee, told Al-Monitor, “We thank Qatar for providing a financial safety net for the PA. We agreed that the Gaza aid would reach the beneficiaries directly through Qatar Charity, without going to Hamas. We stand at an equal distance from Saudi Arabia and Qatar; we do not join one axis against the other, nor do we build a relationship with one at the expense of the other.”

Palestinian Minister of Civil Affairs Hussein al-Sheikh tweeted May 6 that he had visited Qatar together with Finance Minister Shukri Bishara, where they met with the Qatari foreign and finance ministers and agreed to the grant.

On May 7, Haaretz quoted senior Palestinian officials as saying that they were shocked by Abbas’ decision to send his ministers to Qatar to ask for help, as Abbas has close ties with Saudi Arabia, which is the biggest supporter of the PA. Saudi Arabia provides the PA with $220 million a year. This is why the officials quoted by the newspaper expect Saudi Arabia to respond to Qatar's aid, whose size took the PA by surprise, Haaretz reported.

During a Cabinet meeting April 29 in Ramallah, Abbas revealed that he had asked for a loan from Arab countries. “But we are not very hopeful since we did not get any response,” he said.

Essam Aldalis, deputy head of Hamas' political department, told Al-Monitor, “We thank Qatar for its assistance. We have no role in determining the amounts transferred to Gaza or the West Bank; they are all part of the Palestinian territories. If the grant aims to move forward with reconciliation efforts with Fatah, then Hamas welcomes Qatar’s effort in this regard. The movement is ready to accept any and all aid that helps the Palestinian people — from Qatar, Saudi Arabia or any other country, away from any Arab polarization.”

Raed Enairat, a political science professor at An-Najah National University in Nablus, told Al-Monitor, “Saudi Arabia is not comfortable with Qatar's support for the PA, but the PA cannot be blamed because its financial crisis is too serious and it fears Qatar’s money would go to Hamas if it does not take it for itself.”

Enairat added, “Saudi Arabia’s position among the Palestinians is weak, as there is no alliance between the PA and the kingdom. The grant will increase Qatar’s influence among the Palestinians, and Qatar may even go as far as to mediate between Hamas and Fatah to achieve reconciliation, in preparation for the implementation of the deal of the century.”

Qatar’s support has included both the West Bank and the Gaza Strip this time around, while it had been focused on just Gaza in the past. Previously, the PA had attacked Qatar in the media, accusing it of deepening division between Gaza and the West Bank. However, Qatar was praised by Fatah and the PA today.

Hussam al-Dajani, an author who writes for Al Jazeera, told Al-Monitor, “Qatari aid to the West Bank and the Gaza Strip reflects Qatar's diplomatic knowledge of the Palestinian issue. Meanwhile, Saudi Arabia supports the PA only, not Hamas, which gives Qatar an edge when it comes to its role and standing among the Palestinians.”

Dajani added, “The fact that the PA accepted the Qatari grant will have a negative impact on Saudi Arabia, but it would not lead to estrangement. Saudi Arabia could rather reduce aid [to the PA], provide aid to Gaza or file a complaint to the PA.”

Saudi Arabia and two of its prominent papers, Asharq al-Awsat and Al-Hayat, did not cover the news about the Qatari grant to the Palestinians, while it made the headlines around the world.

Financial assistance of this size could not be achieved without US and Israeli approval. Hence, this will allow Qatar, a small country with a small population, to play a historical role by providing aid to both the PA and Gaza and become a decision-maker in the region, sidelining Saudi Arabia.

Mohammad Abu Jiab, editor-in-chief of Al-Eqtesadia newspaper in Gaza, told Al-Monitor, “The Qatari grant will help the PA pay the salaries of its employees. The amount that went to Gaza is part of the temporary truce understandings; it is not permanent."

He added, “The PA will not receive $300 million at once. It will receive the sum in batches based on political developments, such as its relationship with Israel and whether or not it will accept the deal of the century. This is why the grant may not be useful, and the Palestinians cannot rely on it.”

Abu Jiab noted, “I rule out the possibility of Saudi Arabia objecting to the Qatari grant so long as the United States and Israel approved it.”

The Qatari grant to the Palestinians provides a lifeline to the conflicting parties. It prevents the PA from collapse and prevents a war between Hamas and Israel. This makes Doha a mediator that is agreed-upon by all parties, as Saudi Arabia stands idly by and loses an important arena exemplified by the Palestinian territories.