Qatar has mediated, along with Egypt and the UN, a cease-fire ending the latest round of hostilities between Israel and Palestinian factions in the Gaza Strip, after which it pledged to provide $480 million in support of Palestinians. 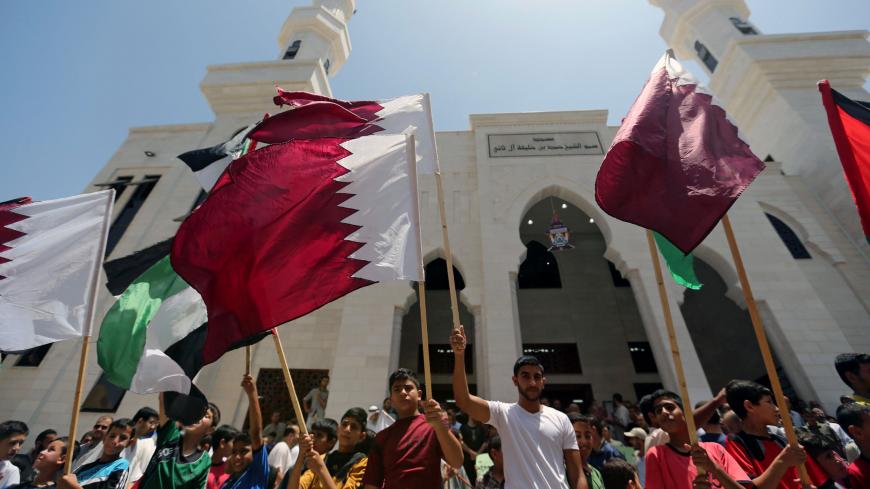 Palestinians take part in a rally in support of Qatar, inside the Qatari-funded Hamad City construction project, in the southern Gaza Strip, June 9, 2017. - REUTERS/Ibraheem Abu Mustafa

GAZA CITY, Gaza Strip — As the dust began to settle May 6 from a major military escalation between Israel and the Gaza Strip, Qatari Emir Tamim bin Hamad Al Thani promised $480 million in grants and loans to Palestinians.

The financial support was coupled with UN, Egyptian and Qatari diplomatic efforts to halt the brief but bitter exchange. The battle broke out May 3 and subsided May 6, leaving 31 Palestinians dead and 130 residential units in Gaza destroyed. Four Israelis were killed, and dozens were injured by rockets fired into southern Israel.

The Qatari Foreign Ministry said in a May 6 statement, “The State of Qatar has allocated $300 million in grants and loans to support the health and education budget of the Palestinian Authority [PA], and $180 million to provide urgent humanitarian relief support for the UN programs in Palestine and support electricity services to ensure access to the various sectors of the Palestinian people, especially during the holy month of Ramadan, and to meet the summer season in which electricity is increasingly needed.”

Qatar’s promise came a few days after UN Middle East Envoy Nikolay Mladinov’s visit May 2 to Doha and after May 5 phone deliberations between Hamas politburo head Ismail Haniyeh and Qatari Foreign Minister Mohammed bin Abdulrahman Al Thani. On May 7, the latter met with Palestinian Minister of Finance Shukri Bechara and Hussein al-Sheikh, a member of the Fatah Central Committee in Doha.

The cease-fire agreement reached May 6 between Israel and Palestinian factions. including Hamas and the Islamic Jihad, stipulates the parties must implement understandings signed between the two sides in October. Under those terms, Israel must allow Qatar to deliver $30 million per month to the Gaza Strip and must open the border crossings. In exchange, Palestinian factions are to stop launching incendiary balloons toward southern Israel and keep protesters away from the border area.

An official on the Qatari Reconstruction Committee told Al-Monitor on condition of anonymity, “Qatari Ambassador Mohammed al-Emadi is expected to arrive to the Palestinian territories at the end of this week [the week of May 5] or early next week at most," to deliver $30 million previously promised. “Emadi was scheduled to visit Gaza at the end of April to offer the funds to Gazans, but Israel refused to allow [it], thus pushing Emadi to reschedule repeatedly.”

Hamas-led Palestinian factions had agreed on truce conditions with Israel in October but the parties didn't begin implementing them until March 31, following a wave of military escalations that involved missiles aimed at Tel Aviv on March 14 and March 25. In response, Israel hit dozens of targets in the Gaza Strip.

According to Hamas spokesperson Hazem Qassem, Qatari and Egyptian mediators, as well as Mladinov, told Hamas that Israel has reiterated its commitment to the conditions. Qassem told Al-Monitor that Qatari officials are making huge efforts to cement the truce by pressuring Israel to follow through. To begin with, he said, Israel should allow funds to enter the Gaza Strip to execute projects such as increasing the hours during which electricity is available, reducing unemployment and establishing an industrial zone in eastern Gaza.

He underlined that the Palestinian factions are closely watching Israel’s commitment to the truce provisions and warned that they will not allow any stalling.

On April 27, Palestinian factions had given Israel until the end of last week to implement the truce understandings, and informed mediators they would return to their aggressive ways if Israel refused to cooperate, which is what happened. There are fears it may happen again.

Talal Okal, a political analyst and Al-Ayam newspaper columnist, told Al-Monitor that Israeli Prime Minister Benjamin Netanyahu feels comfortable after having won in the recent elections, and he can now rest on his laurels — or he might choose to renege on some provisions of the truce agreement.

Mustafa al-Sawaf, a political analyst and former editor-in-chief of the local Felesteen newspaper, told Al-Monitor he also expects another military escalation unless progress is made soon.

The PA has always criticized Qatar for pumping money into the Gaza Strip and establishing projects. However, after Qatar said it would allocate part of the funds to the PA, Palestinian President Mahmoud Abbas said May 7 he appreciates the support.

In April, Qatari officials and economic delegations flooded to the Gaza Strip to launch new relief projects and inaugurated the Hamad Hospital for Prosthetics. A project to rehabilitate 43 schools of the UN Relief and Works Agency for Palestine Refugees (UNRWA) was also completed.

From 2012 until February, Qatar gave $700 million in aid to the Gaza Strip, including an October grant worth $150 million. That money paid the salaries of Hamas government employees, purchased fuel for the power station in Gaza, provided financial aid to 94,000 poor Palestinian families and funded temporary employment projects through UNRWA.