The tough economic sanctions carried out by Palestinian President Mahmoud Abbas against Hamas may have been the final straw to convince Hamas to finally see out a reconciliation agreement. 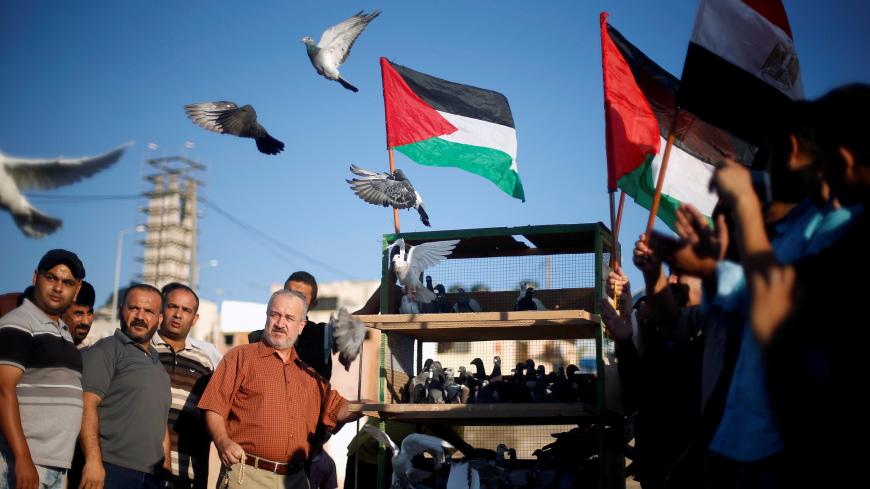 Representatives of the Palestinian Authority (PA) demanded Nov. 1 to hold a proper ceremony to mark the transfer of control over the border crossings to the Gaza Strip, from Hamas to Palestinian President Mahmoud Abbas. This ceremony was their opportunity to show that the PA is returning to Gaza with its head held high, while Hamas hands over the keys to the "real" sovereign.

In fact, those in the PA were sure that this would happen much earlier — that Hamas would come crawling on its knees years ago, begging to return Gaza to Fatah. That did not happen. Even now, 10 years after the military coup in the Gaza Strip, it is clear to the Palestinians that Hamas chose the reconciliation and compromise route only because it had no choice. Now Hamas is willing to do everything to ensure the success of the move.

“No matter what the price, we won’t look back,” said Ismail Haniyeh, the head of the Hamas political bureau, a short time after control of Gaza had formally transferred to Abbas. Haniyeh added a broad hint regarding the quid pro quo he anticipates. “We have done what we were supposed to do, and I now ask the PA to finish doing what they agreed to do,” he said. In other words, to end the economic sanctions on Hamas.

Now it emerges that the punitive steps adopted by Abbas toward Hamas in recent months bore fruit. Fatah officials claimed in a conversation with Al-Monitor that if Abbas had listened to them and had adopted this tough approach after the coup in 2007, the rulership over Gaza would have returned to him many years ago.

The control transfer ceremony indeed took place yesterday. But only in about two weeks — on Nov. 15 — after a period of acclimation and adjustment, will representatives of the PA begin to operate the border crossings in actual fact. Meanwhile, Israel is also preparing for the change of guard. Coordinator of Government Activities in the Territories (COGAT) Maj. Gen. Yoav (Poli) Mordechai disseminated a notice to the press, saying that in light of the control transfer, he instructed his Gaza-coordination people to hold a work meeting with representatives of the PA. In his notice, Mordechai stated that in the meeting that will be held soon “joint work processes will be delineated, [including] Israeli security criteria and demands, with an emphasis on absolutely no presence of a Hamas person or someone on behalf of Hamas, in activities revolving around the crossings and close to them, as was concluded and instructed by Defense Minister Avigdor Liberman.”

That's interesting because until now Israel had work connections with Gaza at the Erez and Kerem Shalom border crossings. The representatives of the PA worked with COGAT in the Gaza Strip, and Hamas supervised the activity from afar. For all sides, this was a no-choice decision. Israel pretended not to see that Hamas was involved, while Hamas put daily handling of the crossings in the hands of PA officials — as if Israel had nothing to do with it. The only difference now is that the game of pretend is over.

Will the transfer of merchandise and the exit and entrance of Palestinians from Gaza (and outside Gaza) be easier and more efficient now? It's still too early to tell. One thing is patently clear: Hamas wants the new developments to succeed and that control be transferred to the PA. In Haniyeh’s words, “No matter what the price.”

“I must admit that I was happily surprised,” a PA official told Al-Monitor on condition of anonymity. The official had been present at the changing-of-the-guard ceremony in Rafah. According to the official, worries and suspicions regarding Hamas exist all the time in light of past grudges. “But now we know that Hamas is really serious about reconciliation; it’s not just empty statements. Hamas is interested in reconciliation, and at this point in time it doesn’t matter why. What is important are the intentions and the result.”

Testimony to the seriousness of Hamas’ intentions lies in Hamas’ reaction to the Israeli bombing of a tunnel close to Kibbutz Kissufim in southern Israel. At least 14 Palestinians were killed in the assault, all members of Hamas and Islamic Jihad. Among the victims of the blast were Arafat Abu Murshid, an Islamic Jihad commander in Gaza’s central district, and his deputy, Hassan Abu Hasnin. After the assault, Hamas officials — from both the political and military wings — worked hard to calm down the grass roots and especially Islamic Jihad supporters, who demanded retaliation for the death of their men.

For years, Izz ad-Din al-Qassam Brigades, Hamas' military wing, insisted on creating a clear quid pro quo: retaliation for every Israeli attack in the Gaza Strip, certainly if Palestinians were killed. One reason for this is that restraint would be viewed as weakness in the Palestinian public opinion. The second reason is to create a "deterrence balance" vis-a-vis Israel.

This time, Hamas bit its lips and refrained from retaliating. In addition, instead of threatening Israel as usual, it threatened Islamic Jihad lest it dare drag Gaza into a new round of violence with Israel. The responses of the spokespeople of the two organizations tell the entire story. The Islami Jihad spokesperson announced on Lebanese channel Al-Mayadeen, which is affiliated with Hezbollah, that the tunnel attack was a declaration of war and that the organization’s leaders would decide on a response within a few hours. But Hamas spokespersons explained on the website of al-Qassam Brigades that Israel’s attack on the tunnel was intended to thwart Palestinian reconciliation efforts.

The Palestinian source told Al-Monitor that the heads of the Palestinian security apparatus were very impressed with the “supreme efforts” (his words) of Hamas to forestall security deterioration and stop any agent on the ground who could have taken potshots at Israel. “This not only shows that they are serious about reconciliation, but also that they are really willing to pay the price,” he said. He added, “Only someone who is really familiar with the way that Hamas thinks and how sensitive they are to the way they are perceived in public opinion can appreciate the extent of their sacrifice.”