The widespread use of audio and video devices is making it harder for Israel to justify its human rights violations in the occupied West Bank. 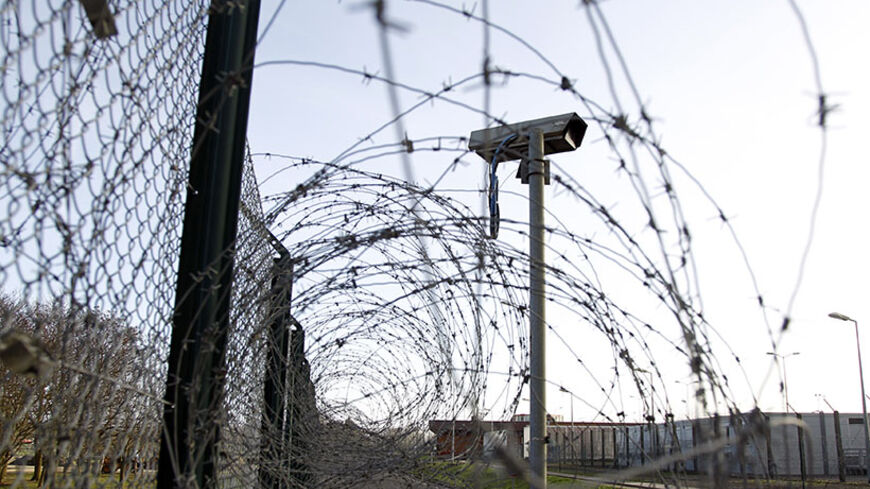 A surveillance camera is seen near a barbed-wire fence, Jan. 6, 2012. - REUTERS/Charles Platiau

Closed-circuit cameras have always been part of Israel's high-tech approach to security, but in recent months, the presence of cameras and Palestinians' use of cell phones have come back to haunt the Israeli security establishment.

A security camera perched on top of the store owned by Hussein Abu Khdeir provided key evidence in the kidnapping and murder of his son Mohammed, showing the Israelis involved and the car in which they abducted him. It was a cell phone camera that captured Israeli policemen beating Mohammed's subdued 15-year-old Palestinian-American cousin, Tariq, who was visiting Jerusalem, on vacation from Tampa, Florida.

A month ago, Israeli officials and spokesmen were caught off guard on May 15, when a security camera atop a carpentry shop captured Israeli soldiers' unprovoked shooting of two Palestinian school boys in the Beitunia area. Israeli officials, believing that there were no cameras at the site, claimed that the soldiers had not used live bullets and that those shot with rubber bullets had been throwing stones at soldiers. Autopsies and the security camera exposed their attempts to falsify reality.

More than three months ago, Israel, apparently worried that video footage would contradict its narrative, claimed that CCTV cameras on the Israeli side of the King Hussein Bridge had not been operational on March 10, the day Jordanian judge Raed Zuaitar was shot and killed by a still unidentified Israeli soldier. An Arab member of the Knesset, Ahmad Tibi, said the cameras had been in use that day and has demanded that the Israeli army release the video, but to no avail.

The mounting video evidence has confirmed what human rights organizations have been saying for some time regarding Israel's excessive use of force and Israeli soldiers being "trigger happy." The soldiers’ approach to Palestinians wielding cameras is also reflective of this newfound concern. They have stopped, confiscated, destroyed or ensured the erasing of damaging video on numerous occasions.

International media organizations have regularly complained of systematic Israeli efforts to block potentially damaging evidence and footage from being made public. The Foreign Press Association in Israel as well as international media freedom organizations regularly issue statements criticizing Israel for its policies toward the media, especially photographers and camera operators. Ben Wedeman of CNN has been hit twice with rubber bullets, including while covering the protests following Mohammed Abu Khdeir's funeral.

Individuals who are unaccredited as journalists or do not have proper identification tend to bear the biggest brunt of Israeli military efforts aimed at recording wrongdoing by settlers and soldiers. Human Rights Watch (HRW) reported that the owner of the carpentry shop that exposed the actions of the soldiers near Beitunia had been threatened by the Israeli military with being “squished like a bug.” HRW said the man was stripped of his ID card, interrogated and ordered to remove the security cameras.

While the incidents cited above reflect unintentional recordings of abuses by Israeli settlers and soldiers, the Israeli human rights organization Btselem purposely documents such abuses. It has provided cameras and training to Palestinians in areas that border some of the more violent settlements and settlers. Some of the recordings made public by Btselem have been useful for following up on some of the most violent incidents, especially in Hebron, although for the most part Israelis continue to act with impunity, even with camera footage documenting their actions.

The Israeli government has been making more frequent use of a legal remedy to curtail negative reporting — gag orders. Such a prohibition was used to curtail publicity about the June kidnapping of three Israeli settlers and another was ordered in the Abu Khdeir kidnapping and killing. International media, including The New York Times, that to go along with such orders, have been harshly criticized for this practice, including by the public editor of The New York Times.

The Palestinian-Israeli conflict has long been known for its battle over local and international public opinion. Photos and video recordings are increasingly exposing attempts to spin the news and justify violence. With modern technology and the easy availability of high-quality devices that can record video and audio, the public might become less susceptible of attempts by soft-speaking politicians to fool them.