Journalism is one of the few remaining links where Israelis and Palestinians can engage and build better understanding of each other. 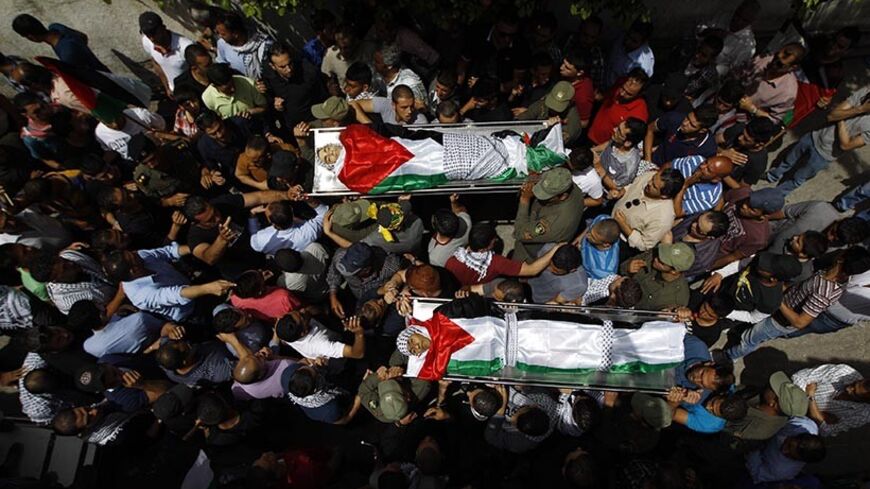 Mourners carry the bodies of two Palestinians, who were shot dead by Israeli forces, during their funeral in Ramallah, the West Bank, May 16, 2014. - REUTERS/Mohamad Torokman

Journalists are supposed to cover the news, not become the subject of it. This was the case, however, with two Israeli journalists who defied a request by Palestinian demonstrators not to film their bare faces.

Most journalists in the field, especially photographers, know the feeling of angry demonstrators approaching a camera crew asking them not to record images of uncovered faces for fear of retaliation by the governing authority. Most photographers can easily gauge the seriousness of the request and judge responsibly whether to walk away and take pictures from afar or stand their ground and insist on the right to film.

Israeli journalist Avi Issacharoff, by his own admission, mistakenly thought he and photographer Daniel Book could stay put and weather the storm. As a result, he was pushed around by Palestinian demonstrators until he decided to leave, along with two Palestinian security officials. Assertions by the Israeli journalist that he had escaped a near lynching, instigated simply because he is an Israeli journalist, seem a bit exaggerated by his own description of the event as well as those of fellow Israelis who were at the scene and were not attacked.

The incident took place in the Palestinian town of Beitunia, south of Ramallah, on May 16. A day earlier, two Palestinian youths, Muhammad Odeh Abu al-Daher and Nadeem Siam Nawara, had been shot and killed by Israeli soldiers using live ammunition. While Israel has promised to conduct an investigation into the fatal shootings, previous investigations have resulted in a white washing of events and absolution of the soldiers involved.

Earlier, Amnesty International had investigated independently and produced a report in February that described Israeli soldiers as being “trigger happy.” The human rights organization also looked into the Beitunia incident and accused the Israelis of “using excessive force” to put down the protests on May 15, Nakba Day, when Palestinians commemorate the height of Israelis pushing them from their lands. The West Bank and Gaza Strip witnessed massive demonstrations this year on the 66th anniversary of the Nakba (Arabic for “catastrophe”).

While the Palestinian Journalists’ Association has denounced all acts of violence against journalists, including the attacks against the two Israelis in Beitunia, their Israeli counterparts rarely speak out about the travel restrictions on Palestinian journalists and regular Israeli army attacks on Palestinian journalists. Of note, on May 15, Palestinian cameramen Issam Rimawi and Abdul Kareem Mestaif were injured by rubber bullets that Palestinians believe were directed at them specifically because they were carrying cameras. The Foreign Press Association in Israel, currently headed for the first time by a Palestinian, Samer Shalabi, issued a statement that “condemns in the strongest terms” the incident and called on everyone to “respect the right of journalists on assignment to work unharmed to freely and unhindered pursue their profession.”

By May 18, Issacharoff tweeted that the entire incident was behind him. He said that he had been informed by Palestinian resistance groups that they had investigated the incident and had “no intention” of attacking him personally and promised that the “incident will not be repeated.” He also tweeted he had been told by Palestinian fighters that he was welcome as “a journalist no matter what his nationality is.”

The Beitunia incident, however, is reflective of a much bigger problem, namely, the inability of Israelis to gauge the depth of Palestinians’ anger and frustration. In his personal observations of the incident, Issacharoff relates that veteran Israeli journalist Danny Rubenstein had once told him that Palestinians and Israelis cooperate in the field of journalism. Issacharoff wrote, however, “The situation has changed of late.”

The cooperation that has existed since 1967 is definitely waning, in part because of Israel’s wall, which has divided ordinary Israelis and Palestinians. The only Israelis most Palestinians know today are soldiers and unruly settlers. Fewer and fewer Palestinians today speak Hebrew. Most of the new generation of Palestinians, except for those who have served time in Israeli jails, no longer speak Hebrew or know any Israelis. Even fewer Israelis have contact with Palestinians.

Journalists are one of the remaining Israeli civilians who can act as a bridge between the two communities. Journalists on both sides of the divide are today under even more pressure to toe the party line and wrap themselves in their national flag. Incidents like the one Israeli journalists faced in Beitunia are a tangible reflection of the widening schism in this conflict, a situation that does not bode well for the future.