Breaking the Silence must speak about one of its own

It is in the Israeli public's interest to know whether a spokesman from an anti-occupation organization assaulted a Palestinian while serving as a soldier in Hebron. 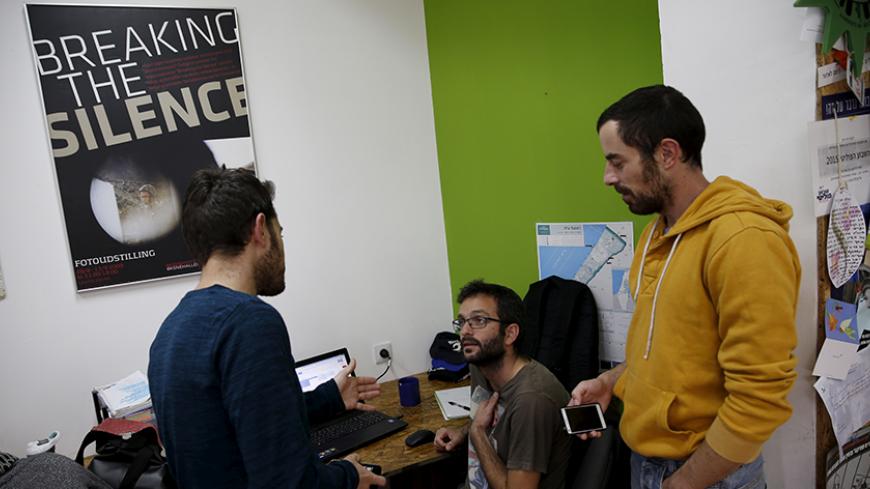 Israeli media and the public are in turmoil over the call by Justice Minister Ayelet Shaked to open a police investigation against Dean Issacharoff, the spokesperson for Breaking the Silence, the anti-occupation organization. Having delivered a personal, difficult-to-take testimonial, according to which he beat a Palestinian unconscious for no justifiable reason during military service, Issacharoff must be investigated in the public interest.

In April, Breaking the Silence had publicized the filmed testimony by Issacharoff, 25, a first lieutenant in the reserves. In it, he courageously confesses how during his regular service as an officer in the Nachal division, he was asked one Friday to restrain a Palestinian who had thrown rocks at Israel Defense Forces soldiers: “My company commander looked at me, my soldiers looked at me, and I stood there and thought what I am going to do with a person who didn’t try to stab me, didn’t try to shoot me. He doesn’t speak Hebrew, and I don’t speak Arabic. So I grabbed him by the back of the neck, and I started hitting him in the face and the chest until he was bleeding and unconscious, in front of my soldiers and my commander. And then we dragged him from there while he was dazed, and we put him in the military post.”

Issacharoff's testimony is unique because it is not anonymous, as with most of the stories by Israeli soldiers that appear in Breaking the Silence reports. In many cases, according to the organization, their testimonies describe war crimes. Issacharoff speaks with his face exposed and provides detailed testimony of an incident that is an especially ugly expression of human evil in the impossible situation of occupation, in which he is the main actor. In his testimony, Issacharoff emphasizes that he acted on his own initiative and does not claim that he obeyed an illegal order.

The uproar was swift in coming. Reservists on Duty, an organization that attempts to counter Breaking the Silence, publicized filmed testimonials by soldiers and officers who served with Issacharoff and contradict his statements. Some of them call him a liar as they speak, like he did, with their faces exposed. Soon after the release of Issacharoff's video, Reservists on Duty had demanded that he be investigated. Two months later, following a request from Shaked to Attorney General Avichai Mandelblit, Issacharoff was called in for questioning by the police. On June 23, he was questioned under caution at the Hebron police station on suspicion of assault.

Shaked decided to intervene for political reasons. She is not only justice minister, but also a senior member of a right-wing party, HaBayit HaYehudi, elements of which are on the extreme right. Before she entered politics, Shaked had become known for her activism with the right-wing organization My Israel, which knew how to find the left's weak spots and hit them there in the media. Thus, she knows the rules of the game pretty well. Issacharoff’s testimony fell into her hands like ripe fruit.

Breaking the Silence and the left claim that the justice minister’s intervention in the case of a private person is political persecution and does not stem from any actual desire to know the truth about the episode. If, however, all the facts of the case are considered, in which a soldier beat a Palestinian until he was unconscious, it is clearly in the Israeli public interest, and an obligation, to investigate Issacharoff’s testimony. The crime he freely confessed to is a serious one, and it tarnishes anyone who was around him and failed to act to prevent it, including his commanding officers, who would allegedly be abettors of the crime. On the other hand, many of the claims by soldiers who were with Issacharoff completely contradict his testimony, including those of the two company commanders.

Issacharoff is a member of a nongovernmental organization that in recent years has become a dominant player in the Israeli public discourse and one of the groups responsible for keeping the issue of the Israeli occupation on the international agenda. The leaders of the group, among them Avner Gvaryahu, testify at the United Nations on the evils of the occupation, meet with world leaders and have direct contact with the US State Department. The testimonies they have gathered are even used in Hamas’ diplomatic efforts.

It is indeed true that Issacharoff is not just another soldier who confessed about a problematic incident he was involved in during his military service in the occupied territories, but someone who is active in an influential organization with many supporters and whose advocacy turns almost any Israeli who has served in the West Bank or Gaza Strip into a war criminal. Therefore no one should oppose the investigation of the incident in which he was involved, but just the opposite. All sides should seek clarification, foremost among them Issacharoff and his organization's leaders, who claim it is all true, while against them stand other soldiers and officers who claim it never happened.

Since the outbreak of the first intifada in 1987, hundreds of thousands of soldiers and reservists have served in the territories, in trying situations inherent to the occupation. Israeli society has been exposed to what happens there, more than once through the criminal trial of soldiers and officers who have abused Palestinians. The Military Advocate’s Office does not treat such incidents lightly and has shown independence and strength, as in the recent case of soldier Elor Azariah, who was convicted of killing an incapacitated Palestinian assailant. The image Breaking the Silence paints — of an Israeli establishment that ignores crimes committed by soldiers in active operations — is not accurate.

Anyone who entered military service in the territories at the age of 18 has experienced the difficult situation of dealing with a civilian population and dispersing demonstrations and clashes. They were all sent there by Israeli governments, including left-wing governments and a defense minister who ordered them to break Palestinians' hands and feet. The minister was Yitzhak Rabin, during the first intifada, who would later as prime minister sign the Oslo Accord and be assassinated for it.

Breaking the Silence is an important voice in Israeli public discourse, and its existence is evidence of a healthy democracy. It is not right for the government to restrict it, but the organization should be able to prove the reliability of its testimonies and to handle the ramifications instead of crying political persecution. It is no coincidence that Breaking the Silence is popular among the international left but finds it difficult to reach the Israeli public. If it wants to change this situation, the first step would be to check whether Issacharoff was telling the truth.