An NGO report has stirred controversy in Israel over the behavior of IDF soldiers during the Gaza war and the policies of the military forces. 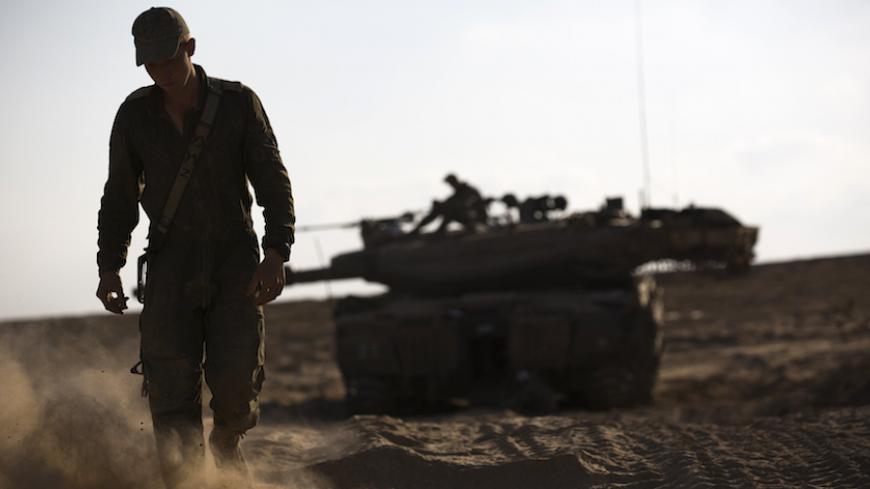 An Israeli soldier walks near his tank just outside the Israeli border with the northern Gaza Strip, Aug. 23, 2014. - REUTERS/Amir Cohen

Nongovernmental organization Breaking the Silence published a report on May 4 that included 60 some testimonies by officers and soldiers about alleged indiscriminate fire by the Israel Defense Forces (IDF) during Operation Protective Edge in July-August 2014. The publishing of the report instantly triggered a spontaneous protest by enlisted soldiers and reservists who wanted to present their version of the events. Posted to social networks, their testimonies gathered momentum and were linked by the hashtag #MyTruth.

In their rebuttals, the soldiers and officers contradicted the claims that civilians had been indiscriminately targeted during the operation.

Matan Katzman, who fought during the operation and now participates in the My Truth initiative, posted the following to his Facebook page: “By telling war stories, I don’t think of myself as some cool guy, a hero or a person that’s more moral than others. There are stories that are a thousand times more important. I’m also not looking for attention, nor do I need any. I’m doing this because I’m proud of my military and of the soldiers that fought shoulder-to-shoulder with me and of whose morality I am sure. I won’t allow a small minority to smear them anonymously.”

The Breaking the Silence report comes amid others that have been published in the wake of the operation. A January B’Tselem report and a February investigation by the Associated Press news agency also looked into the casualties in Gaza and the allegations that most of them were civilian. Whereas the B’Tselem report and the AP investigation were based on Palestinian accounts, the Breaking the Silence report, by contrast, is based on first-hand testimony by IDF soldiers and officers who took part in the fighting. This is why the report elicited so many charged reactions from those who took part in the fighting. They now seek to dispute the way the IDF was being portrayed, namely as a military that did not uphold high moral standards — "purity of arms" — and unnecessarily hurt civilians.

In the setting of an animated debate taking place in the Israeli media and social networks, many soldiers talk about situations in which they exercised extra caution to avoid hurting civilians. Events that seemed innocuous turned out to be actual deathtraps. There are, for example, accounts of an old man carrying explosives on his person or a house where civilians were hiding but the basement held a mortar stockpile. There’s also one about an ambulance that was driving suspiciously and when shots were fired at it, it turned out to be carrying a massive quantity of explosives.

Breaking the Silence activists, on the other hand, contend that the soldiers' counterprotest is a welcome thing, because the testimonies from both sides of the spectrum have prompted a broad public debate in Israel about events during Operation Protective Edge and what can or cannot be done during war. The exchange has opened up a discussion on what constitutes crossing the line between a judicious defensive move and an overreaction that could be deemed a war crime. But mainly, the controversy has started a debate concerning Israel’s defense policy in relation to Gaza, one that has evolved over the years.

Yehuda Shaul, one of the co-founders of Breaking the Silence, told Al-Monitor that My Truth testimonies do not contradict the testimonies that were broadly featured in his organization’s report. According to him, they simply put emphasis on other things. According to him, his report does not set out against the soldiers who fought in Gaza but rather against the broad Israeli military doctrine that has taken hold since Operation Cast Lead in December 2008 and culminated in last summer’s Operation Protective Edge.

“What has changed is the military’s mindset,” Shaul said. “Take, for example, the phrase that every soldier grows up with: ‘When in doubt, there’s no doubt.’ I served during the second intifada. Back then the phrase was, 'If there is any doubt, if you are unsure of what the orders are or what the target is, you don’t pull the trigger.' In Gaza, this phrase took on the opposite meaning: When in doubt, pull the trigger. The ethical code of conduct — the ‘purity of arms’ — has disappeared."

Indeed, the doctrine that Shaul points out unquestionably puts IDF soldiers and officers fighting in a densely populated area into complex and practically impossible situations. The difficulty involves not only the type of fighting in dense urbanized settings but also the character of an Israeli society that is unable, and rightly so, to sustain losses on the ground. Fighting under such conditions is complicated and dangerous. To avoid casualties as much as possible, the IDF doctrine — when in doubt, have no doubt — has become the prevailing modus operandi in the territories, coupled with a second doctrine: deterrence.

“The second doctrine that has evolved is what we call the destruction of Dahieh [the Dahieh doctrine, named after the Beirut quarter that was decimated during the Second Lebanon War in 2006]. What it means is the disproportionate destruction of civilian infrastructure to generate deterrence," Shaul said. "This has paved the way for the IDF conduct in Gaza, the results of which have been devastating. The ‘red lines’ of Operation Cast Lead were crossed in Operation Protective Edge, and the red lines of the last operation will be crossed in the next.”

During Operation Cast Lead, former Prime Minister Ehud Olmert coined a catchphrase that became the underlying theme during the fighting: "The landlord has gone mad," meaning, "All hell has broken loose on the adversary's side." The message instilled in the soldiers at that time by the IDF Gaza command was that the IDF had no other choice but to enter the Gaza Strip to teach Hamas a lesson for its many years of firing mortar shells at Israel. But as it turned out, the deterrence was ineffective and two military operations have already been launched since Operation Cast Lead. Each time a higher and more powerful level of deterrence was called for, and the results were accordingly.

“Look at the IDF’s previous operations. In Operation Summer Rains, some 500 Palestinians were killed. In Operation Hot Winter, there were about 100 fatalities. And suddenly there’s Operation Cast Lead, and we’re talking about several hundreds. Then comes Operation Protective Edge, and the numbers are rising. Ten thousand homes were destroyed during Cast Lead and the number spiked to 18,000 during Protective Edge,” he said. "The 'red lines' of Cast Lead were crossed during Protective Edge, and the lines of the last operation will be crossed in the next operation. The discussion between Breaking the Silence activists and My Truth soldiers is not about the way, but about the system. And that's why one of the things we're trying to say is that the problem is not the conduct of the soldiers on the ground but rather the doctrine and procedures guiding the individual soldier when sent to fight."

Enlisted IDF soldiers and reservists are engaged in a legitimate debate, grappling with complex issues of morality, ethics and the "purity of arms." These issues are compounded by genuine doubts and qualms over being required to fight in densely populated areas.

In view of the stream of testimonies relating to civilian casualties during the operation, the office of the Judge Advocate General set up a "top-echelon fact-finding mechanism" to review incidents that the IDF defined as events in which civilians uninvolved in the fighting were killed unexpectedly and in large numbers. Other incidents that have come under review are those in which medical and UN facilities were damaged.

Out of some 100 submissions that reached this fact-finding body, Judge Advocate General Maj. Gen. Danny Efroni has ordered a military police investigation into 13 cases. Only one event has so far led to an arraignment against three soldiers who allegedly stole money from a Palestinian home in Shajaiyah.

Amid the many testimonies that the Israeli public has heard over the past week, the one that stands out the most is by Capt. Oren from My Truth. It encapsulates the great complexity of IDF fighting in Gaza.

Responding to allegations about uncontrolled and disproportionate fire used in Gaza, Oren said, "Almost every shot had to be authorized by me, and if not by me, then by some other authorizing officer. Every incursion into the area took place after we informed [civilians] to leave. We dropped flyers from the air, made phone calls, you name it. Now you show me another example from history of any other military in the world that informs the enemy where it plans to operate and what it needs to do."

Indeed, Oren's testimony joins another claim made by My Truth soldiers against Breaking the Silence activists. The publication of the detailed report in English and its wide dissemination, they argue, provides pro-Palestinian organizations with a "propaganda weapon" against the IDF, especially at a time when there is mounting international pressure on Israel and the Boycott, Divestment and Sanctions movement is gaining traction.

Breaking the Silence rejects this allegation, explaining that the testimonies are designed to raise awareness in the Israeli public about the IDF's modus operandi in Gaza in general and particularly about Israel's policy in the territories.

The public debate among soldiers and reservists who took part in the fighting in Gaza deserves kudos for the openness of Israeli society, which, despite its fundamental differences of opinion, especially over security issues, conducts a critical evaluation of its moral standards and values. Very few other militaries in the world, if any, do this so openly and freely.