Israel lost on all fronts of the Gaza war

Not only did Israel lose its deterrence edge against Hamas, it also severely exposed its frayed ties with the US and the international community and faces a more comprehensive European boycott of settlement products. 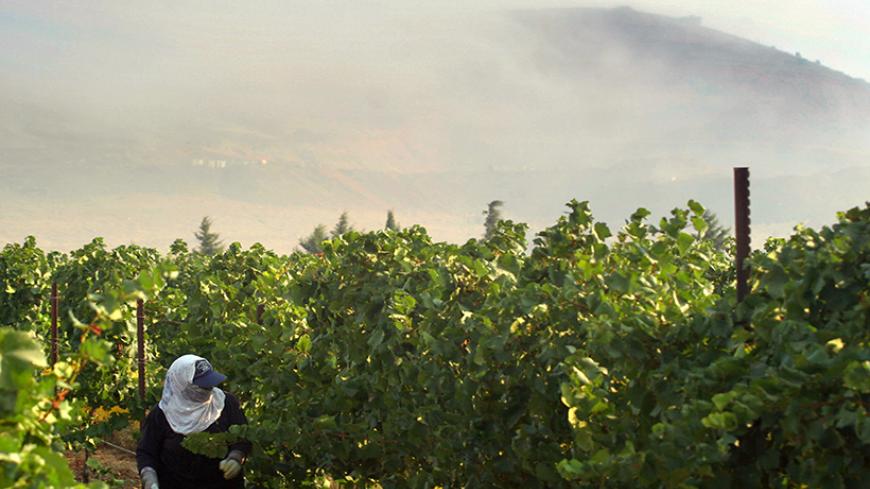 A worker walks through the vineyard of the Golan Heights Winery in the northern Israeli village of Merom. - REUTERS/Yonathan Weitzman

As I’m writing this article [Aug. 19], the negotiating parties in Egypt are endeavoring to reach some sort of agreement, however partial, that would regulate their relations for the near future. This is a problematic relationship, where one side (Hamas) got the other side (Israel) used to having rockets fired at its civilian population for more than 14 years. The other side makes do with temporary “lulls” that fade away after a few months and are replaced by what's known in Israel as a “trickle.” Put differently, what this trickle means is sporadic rockets and mortar shells fired at Israel’s southern communities and in the Gaza periphery only, while not “being an annoyance” to Tel Aviv and the rest of Israel’s central region.

The five-day cease-fire, declared on Aug. 13, was extended by one more day the night of Aug. 18. It's too early to discuss what the parties achieved, because that vague and elusive “thing” has yet to be achieved. However, the following can already be asserted: Israel has paid a heavy price of 64 dead soldiers as well as three civilian fatalities. Its economy and image were dealt a heavy blow. The tourist industry was paralyzed and the economy suffered for over a month. The summer break was ruined for the hundreds of thousands of students and their parents. All of this and almost nothing in return.

Yes, the Israel Defense Forces (IDF) were able to destroy most of the infrastructure of the terror and assault tunnels Hamas had built in the Gaza Strip. But this is pretty much it.

Prime Minister Benjamin Netanyahu’s bombastic statement during Operation Protective Edge that there would be no diplomatic agreement or an arrangement without having “Gaza demilitarized” does not hold water for the time being. Israel will come out of this affair having raised a white flag. It paid a stiff price for obtaining relative quiet whose duration no one can guarantee. There is no substantial change in the strategic balance of power. Able to maintain its rule in Gaza, Hamas is also making significant strides in terms of breaking through the blockade.

Furthermore, the “rehabilitation of Gaza” — this euphemistic term that the donor countries love so much — is a code name for Hamas’ renewed buildup. As was demonstrated before, much of the money infused to this so-called rehabilitation ultimately makes its way to building terror tunnels, replenishing the rocket array and stockpiling munitions ahead of the next round. Strategically speaking, this has been a resounding Israeli failure.

A few days ago, a senior Israeli official, who not until long ago was part of the government decision-making body, told me the following: “During this operation, Israel has lost its 40-year-old reputation. Although the IDF proved once again that Hamas was no match and that the soldiers performed well on the ground, carrying out all their missions, from a strategic standpoint the state sustained heavy damage. Israel’s defense doctrine, which was formulated by Israel's first Prime Minister David Ben-Gurion, is based on simple principles: A decisive outcome, swift shifting of the fighting to the enemy’s territory, and deterrence.

“Of these principles,” said the Israeli source, “hardly anything remains. During all those years, Israel made sure to pursue that important principle of shifting the fighting to the enemy’s territory. This was due to its heightened sensitivity to human lives as well as the fact that its limited territorial area does not provide room for maneuver or strategic depth. This was the case during the 1948 War of Independence, the 1956 Sinai Campaign, the 1967 Six-Day War, the 1973 Yom Kippur War, the First Lebanon War in 1982 and the Second Lebanon War in 2006.

“This time, however, most of the fighting took place on Israeli soil. Hamas had prepared for the IDF’s ground maneuver in the Gaza Strip, while using the tunnels to make its own maneuver. Many of the Israeli fatalities occurred inside Israel. Part of it was due to Hamas sorties from the tunnels in Israel’s rear, which took Israeli combatants by surprise at the home front. And part of it was due to mortar shells.

“And what is most serious,” the senior Israeli source added, “is that the operation ended without deterrence being regained, without Hamas having been decisively vanquished, and without a true military collision between the IDF and Hamas. Israel let Hamas engage it in areas that were most convenient for the organization. It opted to give up a real ground operation and a maneuver deep into the Gaza Strip that would have dealt a blow to the core of Hamas’ strongholds. Instead, it made do with destroying some of the tunnels. And at the end of it all, it embarked on explicit negotiations with Hamas, while violating a sacred principle that had been upheld since Israel’s foundation: No negotiations with terrorists.”

But this is not where the saga of Israeli failures ends. During Operation Protective Edge, the dark side of the moon — in terms of US-Israel relations — was revealed. The severe crisis of trust between Washington and Jerusalem was exposed to its fullest extent and in broad daylight. The nonstop series of events, which were described in my previous article, “lifted the curtain,” if you will, on the real, deep and strategic crisis in the alliance between Israel and its greatest and most important patron in the Western world.

Over the coming days, an attempt will be made to blur these facts, which popped up in real time. US Secretary of State John Kerry is expected to arrive in Israel in a bid to dull the impression left by the monthlong farce. Kerry will try helping President Barack Obama, who is inching closer to critical midterm elections and is afraid of losing Jewish support and money. Yet what’s done is done. It seems to me that nobody — neither in Israel nor in the United States — will believe any of these bogus embraces.

One other, equally important topic is the European boycott. When Obama started his second term, I reported here the modus operandi that was planned for the diplomatic process. As it turns out, the Americans and Europeans entertained the possibility that the diplomatic process between Israel and the Palestinians would derail. That assessment came true. The plan was then to take measures — led by the Europeans — to harm Israel, including implementing economic boycotts in certain areas.

The current European boycott on dairy products originating from farms or dairies beyond the Green Line (including the Golan Heights) is such a premeditated and calculated move. At this stage, the United States cannot boycott Israel. Such an act would be tantamount to declaring war and bluntly abolishing the strategic ties between the two countries. This is why Obama is doing what he did during the crisis in Libya — leading from behind.

Al-Monitor learned, some 18 months ago, that the European boycott was devised together with the United States. In this affair, the Europeans play the role of the “bad guys,” realizing the fantasy of the Obama administration. They were the ones chosen to hurt Israel. For his part, Obama will say that he is powerless to help. This is how the noose around Israel’s neck will be tightened, to the point of seriously damaging its economy.

At the moment, the boycott applies only to dairy and livestock products. The next stage will apparently apply to fruits and vegetables, the poultry industry and possibly even the wine industry. Although the damage to the Israeli economy is not significant at this point, the precedent, however, is very significant. For the first time, the Europeans are not talking about “labeling” products from the settlements. In fact, they’ve stopped mincing words. In a broad and sweeping move, they are simply stopping the import of products manufactured beyond the Green Line even if they contain only one ingredient that originates from there.

The European boycott is already here. And unlike the impression Israel is trying to make, this is not an anti-Semitic move, but purely a political one. It was planned by Israel’s greatest friends — the United States and Europe — in order to apply pressure on Netanyahu government’s settlement policy.

Given this state of affairs, it seems to me that dealing with anti-Semitism would actually be preferable. At least in that case, Israel has something to say to counter baseless hatred. Yet when it comes to boycotting the settlements, Israel has a lot less to say.