Those in the Arab world who claim that Israel lost many wars mistakenly perceive the democratic process of auto-criticizing and evaluating misjudgments during the war as admission of defeat. 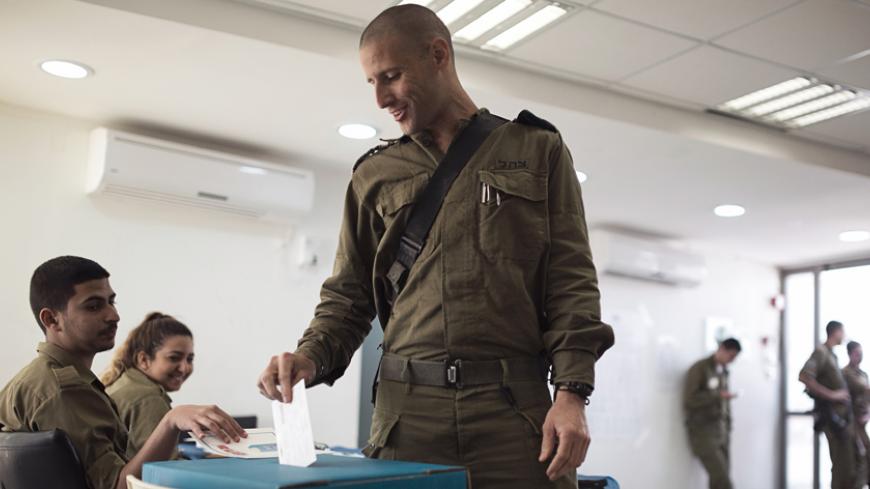 An Israeli soldier casts his ballot on an army base near the southern city of Ofakim, March 15, 2015. - REUTERS/Amir Cohen

The reading of Adnan Abu Amer's Al-Monitor article raised rueful thoughts in my mind. It seems to me that despite the fact that we have lived next to and among the Palestinians for almost 100 years, there has been no progress at all in the Palestinian understanding of Israeli society, its character and its principles. As if 67 years have not passed since Israeli independence and the Palestinian Nakba. As if we are not intermixed and jumbled together, cheek by jowl. Indeed, we still have a very long way to go until mutual understanding will prevail between us. I hope that we understand them more than they understand us.

According to Abu Amer, Hamas inflicted a resounding defeat on Israel in Operation Protective Edge in July-August 2014, at least according to the “war diary” and the leaks and testimonials publicized in Israel since the operation. In the exact same breath, Abu Amer details the fact that none of Hamas’ objectives in that war were achieved: the passages were not opened, the closure was not removed, a naval port was not established and an airport will not be built. So how is it that one side (Israel) was defeated in the war, while the other side (Hamas) did not achieve any of its avowed goals?

A short historical overview: Israel won the War of Independence (despite the fact that throughout the war, the Arab armies announced overwhelming victories in the battlefield). Israel also won the Sinai Campaign in 1956 and conquered a large part of the Sinai Peninsula, but at that time Egypt was forced to fight England and France as well, so let’s not count this event. What about the Six-Day War in 1967? This was a decisive Israeli victory that was accompanied by the famous Radio Cairo broadcasts that announced in Hebrew, throughout the entire war, that “Tel Aviv is burning.”

According to the Arabs, Israel hasn’t had a single victory since the Six-Day War. The Arab regimes, media and propaganda give Arab civilians their own version of events: According to them, Israel was routed in the 1973 Yom Kippur War and in the First Lebanon War in 1982. In the Second Lebanon War in 2006, Hezbollah won a great victory over Israel. Then Israel was routed by Hamas in the following operations: Cast Lead (2008-2009), Pillar of Defense (2012) and Protective Edge.

The question is, if we have already lost six wars and operations in succession, how can it be that we are still here, alive and kicking? We are a small, isolated state surrounded by hundreds of millions who want to eliminate us; we are supposedly defeated time and again on the battlefield, yet we still exist. Hasn’t anyone ever noticed the oxymoron here?

Israel cannot afford to lose a single war. The first time that Israel will really lose a war, it will no longer exist. That is the secret of its power. It cannot allow itself to lose. But it can allow itself not to win.

We’ll return to this point soon, but first, some relevant data: Israel is a military and economic power. Its yearly gross national product has recently risen above the trillion-shekel mark (about $250 billion). It exports almost $100 billion a year. Its per capita gross domestic product (GDP) is on a European scale, dozens of times higher than the corresponding per-capita GDP of all the countries surrounding Israel put together. The Israel Defense Forces (IDF) is considered one of the most advanced, strongest armies in the world. Israel’s air force is renowned. Israel operates sophisticated spy satellites, is a world leader in the field of drones (RPVs, remote piloted vehicles) and is viewed as a global hi-tech power. Israel is also the only country in the world that invented, developed, created and successfully operates an interception system of rockets in flight. And we haven’t even scratched the surface of medicine, agriculture, biotechnology and nanotechnology, fields in which Israel has a presence in the highest global echelons; it has a number of Nobel Prize winners among its scientists. And then there are those foreign press reports stating that Israel is a tremendous nuclear power as well.

Israel does all these things when it has practically no natural resources (the recent natural gas discoveries is something totally new), its territory is tiny, its population is small — and while it is “defeated” every few years by Hamas, Hezbollah and all the rest. The truth is that we can only hope to continue to “lose” in this way.

And now, in earnest: Since I'm an Israeli journalist who has lived in Israel, worked in Israel and covered Israel for the media over the past 30 years, I hereby declare the following: Since last summer, no Israeli “admission” of defeat in Operation Protective Edge has been disseminated, no binding “war diary” has been published. Abu Amer tells his readers that as opposed to the past, this time Israel “admitted” its defeat relatively quickly. In his words, it took Israel “decades” to admit its defeats in the Yom Kippur War and the Second Lebanon War.

Here is another correction: After the Yom Kippur War and the Second Lebanon War, a defeated atmosphere did prevail at first in Israel. Later on, this impression was replaced by the belated understanding of the great achievements of the two wars. A commission of inquiry (Agranat Commission) was formed immediately after the conclusion of the Yom Kippur War, the chief of staff was dismissed, Israeli generals vacated their seats and Prime Minister Golda Meir resigned after the elections. A commission of inquiry (Winograd Commission) was also formed after the Second Lebanon War; public criticism was scathing and the chief of staff ended his term of office.

In historical perspective, there is almost a consensus in today’s Israel that a great military victory was achieved in the Yom Kippur War: a victory against all odds, after Israel had been caught by total surprise. When the war ended, the IDF was situated on the east bank of the Suez Canal, the Third Egyptian Army was encircled and Damascus was threatened by IDF artillery fire.

The Second Lebanon War provided Israel with almost absolute peace and quiet on the Lebanese border, a situation that has continued for nine years. Israel had never had such a long period of quiet on any front. And the other strategic attainments of the war, including the deployment of a substantial United Nations Interim Force in Lebanon on the border fence, are now viewed as important gains.

What Abu Amer is not able to do is to differentiate between Israel’s well-known traits — of self-flagellation, poking at open wounds and expressing scathing, harsh criticism of the government (as is customary in democracies) — and the definitions of victory and defeat in the battlefield. It took us time, but today even Israel’s public understands that the era of great victories has come to an end. No one, including the United States, has the ability to enter a densely populated territory and fish out every last terrorist hiding there (with the double risk of triggering an interminable guerrilla war afterward).

Today, the goals of the IDF are not to destroy the enemy but to give the country longer breaks between one wave of violence and another, and to shorten these conflicts as much as possible while inflicting heavy damage on the other side and creating as much deterrence as possible.

The story is simple: Today, 67 years after its establishment, Israel does not face any real existential threats. The peace agreements with Egypt and Jordan are firm. Hezbollah and Hamas constitute a significant terrorist threat and strategic rocket threat (mainly from Hezbollah), but no nation and no state has ever been overpowered through aerial attacks. The next flare-up vis-a-vis Hezbollah will not look like Operation Protective Edge. Instead, the Israeli home front will suffer painful hits, there will be destruction and, probably, dozens and maybe hundreds of civilian casualties. Israeli security and military officers are already talking openly about this scenario, to coordinate expectations in advance.

Abu Amer is right about one thing: The Hamas Izz ad-Din al-Qassam Brigades' fighters are courageous, well-trained warriors. Hamas has several hundred fighters on this level. This force does not constitute a real threat to a regional military power like Israel. But the IDF cannot locate, pursue, find and eliminate the members of this force in a population of roughly 1.8 million people in an especially dense urban strip, without paying a very heavy price in human life and in international legitimacy. This is the reason that Israel prefers to terminate these clashes without a decisive victory; the price of such a victory would be unbearable.

Hamas tried to harm Israel during Operation Protective Edge in several different ways: naval raids, rockets, primitive RPVs and forays from tunnels. Yet, all these attempts ended in utter failure. Hamas’ rockets barely harmed the Israeli population, thanks to the Iron Dome air defense system. Naval raids were intercepted and eliminated. Incursions through tunnels led to the slaying of soldiers due to the element of surprise, but did not harm the civilian population.

When Operation Protective Edge ended, Hamas did not receive any of its demands and did not attain any of the goals it aspired. The IDF lost 67 soldiers (and six civilians), while more than 2,100 people were killed in Gaza, about half of them terror operatives and about half civilians. Nevertheless, Israel did not bring down the Hamas regime that continued to launch rockets deep into Israel until the very last day. Israel did not break Hamas’ spirit that is alive and kicking as I write these words. The blockade on Gaza was greatly eased and almost totally removed except for weapons, ammunition and materials that could be used for military purposes. Israel had decided to ease the blockade even before the onset of the operation, though implementation of the new policy is taking place only now and could be viewed by Hamas as “a war achievement.” As far as Israel is concerned, it may as well be understood this way.

The reports that Abu Amer refers to are characteristic of the Israeli media and the democratic nature of the state. That’s the way it is with us after every war. We suffer pangs of conscience, we look high and low for where we’ve erred, we pinpoint all the mistakes and slipups and immediately write about them, broadcast them and harp on them. This is no conspiracy, no “muhammara” (plot); it is a genuine Israeli process of externalization, of searching and making efforts to improve for next time. Not one of Israel’s soldiers, officers or politicians, not even talented Yesh Atid Party Knesset member Ofer Shelah claimed that Israel was “defeated.” The arguments that are raised are that Israel did not know what it wanted to achieve, that the operation was not planned, that it took too much time to decide to act against the tunnels, that the management of the operation was indecisive, that there was no real resolve, that anti-tunnel techniques were not developed and so on. And by the way, all these allegations are true, and that’s the way it is after all the wars. Let's hope that we've witnessed this for the last time — war, that is, not the allegations.