To stop Hamas, Israel should cut electricity and supplies to Gaza

If Israel still wishes to regain its deterrence vis-a-vis Hamas without entering Gaza, it will be left with one option only: shutting off Gaza electricity and closing the crossing points to the 400 daily supply trucks entering the Strip. 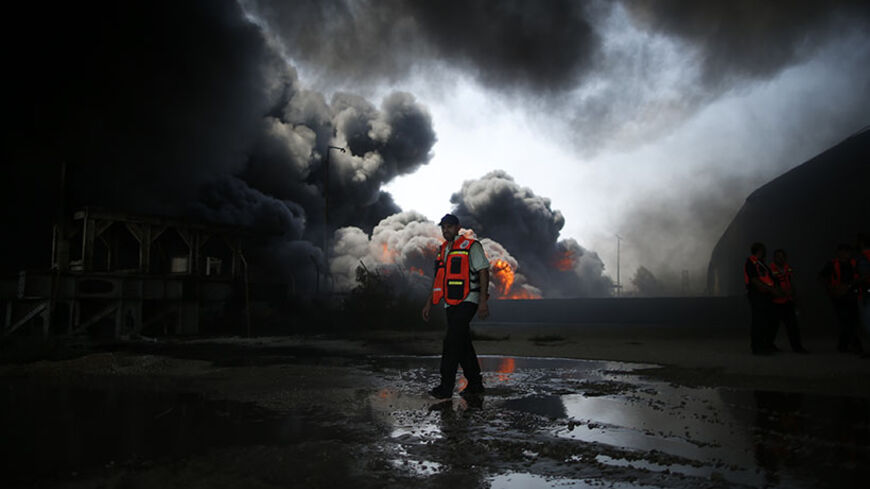 A Palestinian firefighter participates in putting out a fire at Gaza's main power plant, which witnesses said was hit by Israeli shelling, in the central Gaza Strip, July 29, 2014. -

After the seventh cease-fire collapsed and more than 160 rockets were fired from Gaza in a single day — a record number since the start of Operation Protective Edge — Prime Minister Benjamin Netanyahu addressed the nation on Aug. 20. He said, “This is the harshest blow Hamas has taken since it was founded.” Even in the course of the speech, alerts were sounded in all the Gaza envelope communities. The sirens continued throughout the entire day. These alerts cast much doubt on the prime minister’s emphatic declaration.

Although Hamas absorbed a hard blow and many neighborhoods in Gaza were demolished and destroyed, Israel lost its power of deterrence and the leaders of the strongest state in the Middle East are in a quandary. The elimination of three high-ranking Hamas members, including Raed al-Attar, one of those responsible for the abduction of Gilad Shalit in 2006, together with the attempt to eliminate Mohammed Deif, (though it is still unclear if he is alive or dead) were not enough to deter Hamas. The fact that Hamas continues to fire proves it.

The military campaign in the Gaza Strip has been going on for 45 days (as of Aug. 21), twice the length of the 1973 Yom Kippur War that extended for three very harsh weeks. Then, despite that it had been caught by surprise, the Israel Defense Forces (IDF) succeeded in surrounding the Egyptian Third Army and completely changed the battle alignment. Hamas is not the Egyptian army. Its rocket and mortar firing obstruct the lives of Israeli civilians, but do not constitute a threat to Israel’s existence.

Yet there is one thing that characterizes the two campaigns that are separated by about 40 years. In the Yom Kippur War, the most traumatic of Israel’s wars, the Egyptian army was prepared and determined to reclaim its honor at any price — its pride that had been trampled on in the 1967 Six Day War. Hamas, like Egypt, is also adamant to fight Israel in an all-or-nothing war for the honor and future of the movement. Therefore, nothing but a clear knockout victory will cause it to deviate from its goal. Not even the heavy price already paid by the Gaza Strip’s residents in the course of the operation can sway it.

In 1973, the State of Israel immediately recognized the danger of a large army invading its territory and threatening its security. By contrast, the current Netanyahu government remains stuck in the military conception of deterrence instead of tilting the military balance to defeat the enemy. But all attempts to bring about an arrangement in the Gaza Strip vis-a-vis Hamas (while allowing Hamas to retain sovereignty), and not generate substantive change on the ground, is slated for failure.

The dogma of "arrangement and deterrence" that was advanced in the Cast Lead (2008-2009) and Pillar of Defense (2012) operations did not stop Hamas from growing in strength. The fast increasing firing on Israel’s south has continued for almost 14 years, and it progresses and is perfected from year to year. This is, undoubtedly, the longest war of attrition ever suffered by Israel, though there were long periods when fire was held off. Now Hamas is trying to drag Israel into an incessant, daily war of attrition that involves rocket fire on the center of the country as well.

Israel cannot allow itself to be dragged into such a situation. A war of attrition was waged the length of the Suez Canal from 1968 until 1970, with two armies facing each other. However, the battlefield was far from the home front; the hinterland was not at all involved in the war. Such a long attrition war cannot transpire today, with Israel exposed to the ongoing threat of rockets on its cities and towns, including north of Tel Aviv. This would constitute a serious blow to its economy and would severely damage the morale of its civilians. Finally, such a situation would harshly impinge on Israel’s deterrent power not only in the Palestinian arena, but with regard to the entire Middle East.

Israel must initiate a plan of action and not allow itself to be dragged along. Israel must tilt the balance in the military campaign against Hamas. Israel will only regain its lost deterrence when it defeats Hamas and substantively threatens Hamas rule.

A leak from Israel’s diplomatic-security cabinet dealt with the ramifications of conquering Gaza, implying that Israel would be entangled in an extended military operation that would entail heavy losses. This leak harmed Israel. The leaders of Hamas’ military and political wings well understood the soothing message: that the movement’s survival was not in danger. In other words: Since the IDF has no intentions of penetrating deep in the Gaza Strip and is only willing to deploy forces the length of the borderline, then Hamas can obviously continue to launch countless rockets against Israel. It is clear that in such a setup, the Hamas regime does not face real danger to its rule and its control of the Gaza Strip.

The Gaza Strip is one of the most densely populated places in the world. A military operation within a civilian population is a complex affair with many implications for Israel’s public image. As it is, Israel’s image is already under strong international attack due to the harm caused to innocent civilians, many of whom served as human shields for al-Qassam Brigades. But there is still a great distance between conquering Gaza and between delivering a serious blow to a terrorist organization, an organization that is vastly inferior to the IDF in firepower and equipment. There are still many options open.

Israel squandered the international credit it received at the beginning of the operation to defeat Hamas in a ground operation. Israel’s highest defense and diplomatic echelons did not distinguish Hamas’ determination to fight what it viewed as the mother of all wars. In any case, encircling the city of Gaza with tanks and forcing the political leadership to leave their hideouts seems to be an unrealistic scenario today. The initial momentum was wasted and international public opinion will no longer allow Israel an extensive operation that will lead to more wounded and dead and additional destruction in ruined Gaza.

Hamas is fighting to remove the blockade that was imposed on the Gaza Strip by Israel following Hamas’ military coup seven years ago. Almost the only way that Israel can defeat Hamas without conquering the Gaza Strip is to prove to Hamas that the closure and strangulation can get even worse and even more dangerous to the Hamas regime and the survivability of the movement.

Gaza is geographically trapped between Egypt and Israel. Its access to the sea is also hermetically blockaded by Israel. But paradoxically, in the course of the Defensive Edge operation, the Kerem Shalom crossing remained open. Even while rockets were fired and al-Qassam fighters attacked from their tunnels, the crossing operated almost business-as-usual. Raw materials and foodstuffs continued to pour into the Gaza Strip. In other words, while one hand of the IDF delivered military blows, the other hand provided for Gaza’s daily consumption. This odd situation has no comparison in the world. During the days of warfare, just like former daily routine, about 400 Israeli trucks waited in line every day at the crossing and unloaded foodstuffs and raw materials to Gaza. It was as if there were no war, and as if Israel had no desire to adopt reasonable steps to defeat the other side. The truck drivers watched the war being waged around them, while the crossing’s conveyor belts operated as usual.

Wouldn’t the closing of the Kerem Shalom crossing constitute a reasonable means of exerting pressure on a movement that violates cease-fires time after time? Is it not logical that a state being attacked by rockets should refuse to provide basic products to those who launch those rockets nonstop and do not cease even after so many deaths and wounded casualties and tremendous destruction of its residential neighborhoods? As aforesaid, Hamas will only be deterred when the movement feels that its future as a movement is in danger.

After Israel struck the Gaza Strip’s power station, most of the Strip’s electricity comes from Israel. Cutting off Gaza’s electricity can lead to a humanitarian crisis and pressure from the entire international community on Israel. But Hamas must understand that when it escalates its attacks on Israel and continues to threaten its civilians, then disconnection of its electricity coming from Israel is a conceivable, even legitimate weapon. Israel must announce to the entire world that, if Hamas will not cease threatening Israeli civilians, Israel will completely disengage from Gaza. In other words, Israel will halt the transfer of goods to Gaza and sever the supply of electricity. A total disengagement from Gaza constitutes a significant threat to Hamas, more than blowing up empty houses of al-Qassam activists and shooting into open areas. To date, the IDF has attacked thousands of targets, to the extent that its "target bank" has been almost depleted. Yet the IDF has not yet achieved the main goal set by Israel: to bring peace and quiet to its cities and civilians.

Therefore, under the assumption that an additional ground invasion is likely to incur heavy casualties, one option is still open to Israel: to tighten the closure on Gaza and prove to the Hamas leadership that the situation can get a whole lot worse.

True, in the past I wrote here that a blockade on Gaza was a strategic mistake. But at this point in time, Israel has reached a dramatic and extreme stage in the war vis-a-vis Hamas. A deepening and tightening of the blockade noose is also an extremely dramatic step. When an organization threatens, even after 45 days of a military operation against it, to open the gates of hell to Israeli civilians, a different, extreme action is required — one which was not tested in the past, before it will be too late or become too complicated.