A changing Middle East reality confronts the Israel Defense Forces with new fighting methods and targets while diplomatic opportunities have emerged with Saudi Arabia and other Arab states. 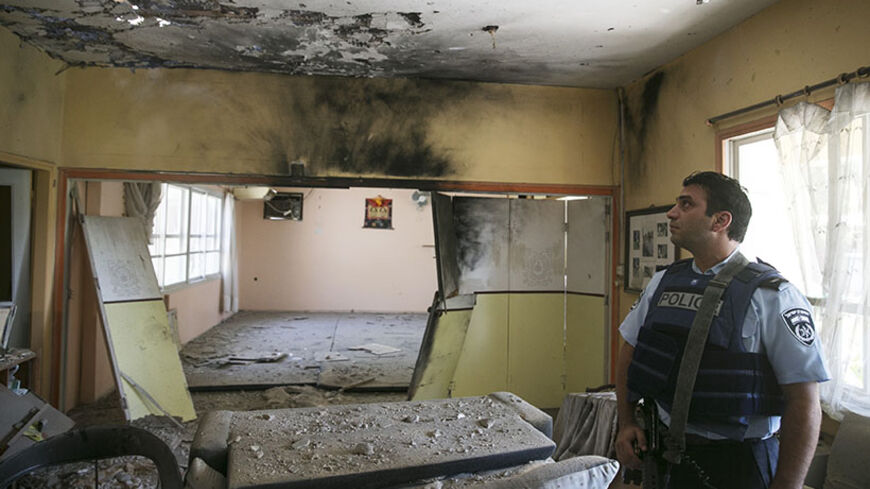 An Israeli policeman surveys a building damaged from a Palestinian mortar salvo in a community outside the central Gaza Strip, Aug. 21, 2014. - REUTERS/Baz Ratner

”Our generation of officers who were mobilized to the IDF [Israel Defense Forces] after the [1973] Yom Kippur War, now experienced the dramatic change in the map of the Middle East that leads to no less a dramatic change in the map of threats.” This statement was conveyed to Al-Monitor by a very high-level Israeli officer, a member of the IDF’s General Staff, who took part in building up the army’s forces and in directing Operation Protective Edge.

“Everything has to be changed,” he said, “including the very language we speak. Even when we talk about tilting the balance, we have to redefine what that means. Any military intelligence branch director who observed the Middle East five, 10, 20 years ago, saw flags. For every state, a flag. Under each flag, an army, a regime, a government or a ruler who made all the decisions. Today, when an Israeli intelligence branch director looks at the Middle East, he sees dozens of flags. Today, one could plant a lot of flags on the Syrian map alone.

“While we speak” (Aug. 27), the officer said, “Jabhat al-Nusra, an organization affiliated with al-Qaeda, is storming the city of Quneitra in the Syrian Golan. In the afternoon they wrested the border crossing between Israel and Syria from [Syrian President Bashar al-] Assad’s hands, and now they are trying to conquer the city itself. This is a totally new reality. Once upon a time, there was one address in Syria. Today, there are dozens. In order to win [in the past], you had to beat the Syrian armored divisions. And that is something that the IDF knows very well how to do. The army is built for that. Today, the story has become far more complicated, elusive, difficult and shadowy.”

The officer said, “What terror did was, first and foremost, to recognize IDF’s superiority in the acknowledged spheres: air, sea, and land. So they created a new underground medium, tunnels, building them as a new combat space under their control. And they squeezed their activity into villages, cities and towns. In Lebanon, Hezbollah dispersed its strength among 200 villages. In Gaza, it is crammed into the crowded urban space. Almost every multistory building has a Hamas headquarters. They counted on the assumption that Israel wouldn’t touch a 14-story residential building filled with civilians on flights three to 14, while the three lowest flights are occupied by Hamas headquarters.

“In this, they erred. We felled nine such high-rises in the last days of the operation. We evacuated the population, the civilians understood that we were serious about this, and we downed those towers so that it would be clear that we would not accept terror in any form it appears. Whoever hides behind civilians is responsible for the well-being of those civilians.

“The last war to be a real mobile war between armies was the Yom Kippur War,” said the high-echelon Israeli officer. “Now, it is something completely different. Once, the targets were standing right in front of us. Everything was clear, sharp, defined. Today, the other side counts on the fact that we will kill its citizens, because that is its most efficient weapon against us. We go to great lengths so that it won’t happen, given the limitations of the territory. It is not simple at all.

“In Gaza, we encountered more than 50 kilometers (31 miles) of attack tunnels that penetrated Israeli territory. We had to develop a military doctrine to neutralize those tunnels, when we were on the move and under fire. They invested hundreds of millions of dollars — all the money that they were supposed to invest in civilians, in rebuilding the refugee camps, in creating a new future for the people of Gaza — into massing assault capabilities to be used against us. An arsenal of 10,000 rockets, hundreds of kilometers of tunnels. They built a tremendous underground Gaza that allows them to conduct their entire lives under the earth, and also to conduct war. They didn’t even consider instructing the civilians to take shelter in all these tunnels. It didn’t occur to them. They left it to us.”

The senior Israeli officer estimates that Hamas hoped to kill 60 to 100 Israeli civilians with their rockets. “It would have created a sense of shock and terror on the Israeli home front. They hoped to paralyze the hinterland, to kill people in Tel Aviv, to shut down the airport. Almost none of these things happened. Six civilians were killed. Most of the damage was done in the villages close to the fence, called the Gaza Envelope area. The Iron Dome [air defense system] provided the Israeli home front with almost complete protection. Yes, daily life routine was disrupted, but we can live with that.

“Simultaneously, we neutralized their entire tunnel deployment. Their supply of rockets was reduced until they were in the red; some were launched and another large group was destroyed by our forces.

“Hamas emerges from this story with their hands on their heads, without a single achievement. And yet it is still difficult to call it a victory here. Issues are much more elusive now. But one thing is certain: According to all our intelligence reports, the atmosphere around them is gloomy. In their bunkers, they talk about defeat, about damage. They know that it will be hard for them to explain to their nation, for what purpose did they destroy Gaza? What exactly did they receive in exchange?”

I asked the officer to compare Hamas to the Islamic State. “It is clear that they come from the same doctrine. It is the same ideology. In the same time period that the IS exhibited the monstrous video clip of the beheading of American journalist James Foley, Hamas executed 25 civilians who were accused of being Israeli collaborators. Just like that, they dressed them with head covers and shot them in the middle of the street. We only found out a few days later that these were not collaborators they caught in real time during the war, but prisoners who had spent years in jail convicted of collaboration with Israel. Hamas fury caused them to take these prisoners out of jail and kill them on the street. Exactly like the IS. The differences between the various factions are semantic. But at the end of the day, the ideology is the same ideology.”

I asked the senior officer why the IDF did not push to overthrow Hamas in Gaza. “Because we didn’t know what would arise in their stead,” he answered. “Even today, when you look at Gaza, you see Global Jihad there, the Palestinian Islamic Jihad, various al-Qaeda offshoots and many other factions. There is a problem of governability. It is a disturbing phenomenon that states are collapsing, and in their stead non-state actors are sprouting. It is a process of Somalization, of lack of governability, and it is very hard to conduct ourselves in the face of this process.

“Thus we faced a dilemma. If we bring down Hamas, what will we get instead? No one has an authoritative answer. Therefore, the General Staff’s response was not hesitant; it was calculated. On the operational level, the IDF can conquer Gaza and topple Hamas. The question is what happens afterward. At the end of the day, an army is not ‘graded’ by opinion polls or the way the wind blows, but by the answers to two simple questions: Did the military fulfill the mission imposed on it, and did the country’s strategic situation improve as a result? In my opinion, the answer to these two questions regarding Operation Protective Edge is yes.”

I spoke to another Israeli security source who specializes in the Arab issue. He serves in an important, sensitive position in the system. I asked him to explain the joyful cheering in Gaza, the thousands who went out to celebrate in the street when the cease-fire went into effect.

“It is simple,” he said, “We think in Western terms. They think differently. They think in completely different terms and speak a completely different language. From their point of view, the fact is that for 50 days they faced off the great IDF, the trained, well-equipped IDF with an air force and intelligence and smart bombs and unmanned aerial vehicles and everything else — and they are still standing, they haven’t been destroyed yet. They retained their rule and their initiative; as far as they are concerned this is victory. Time has no significance in their eyes. They have patience. They are still alive? So they won. All the rest are facts that they can maneuver for their benefit. That’s how it works there, on the other side.”

And what about the diplomatic part? Here, too, great opportunities are supposed to surface. An Israeli cabinet minister told me this week, “If Israel does not exploit the one-off diplomatic opportunity that we now encounter, it will be a catastrophe.” Justice Minister Tzipi Livni thinks exactly the same way.

At the end of last week, Aug. 21, the Saudi foreign minister was quoted as uttering an amazing statement, one that barely registered on the Israeli radar. The minister said that we must begin to get used to the idea of coexistence with Israel. Simultaneously, a statement in a similar vein was published Aug. 11 in the Sharq Alawsat paper saying, “There is no longer an Arab-Israeli conflict,'' but a conflict between Israel and Turkey, Qatar and Iran. These are unprecedented changes.

“Someone in Israel has to understand this, and rise to the challenge,” said the diplomatic source in Jerusalem. That ‘someone’ is called Benjamin Netanyahu. But when it concerns him, doubt also appears. Last week, at one of his public appearances, Netanyahu said that we might see also a new diplomatic horizon following the military operation.