What's behind Israel's sudden enthusiasm to investigate attacks on Palestinians?

Justice Minister Ayelet Shaked's push for a fast-paced inquiry into the case of an Israeli soldier's alleged abuse of a Palestinian was not about justice, but about bringing down Breaking the Silence. 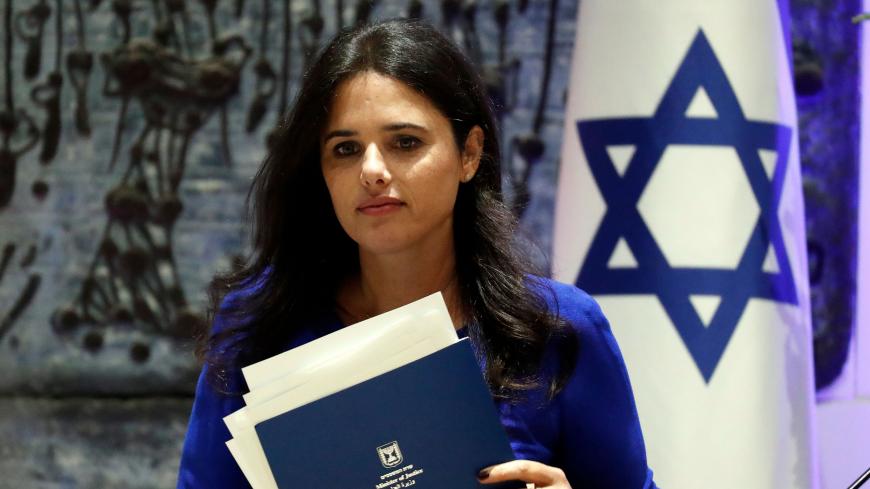 On June 7, Israeli Justice Minister Ayelet Shaked had asked the attorney general to launch an inquiry into claims by Dean Issacharoff, the spokesman for Breaking the Silence, that during his military service he had beaten a Palestinian. A little more than five months later, on Nov. 16, the state prosecutor decided to close the case.

The investigation had moved along at record speed considering the significant resources required to locate the said Palestinian in the West Bank city of Hebron and to question him about an event that according to Issacharoff occurred in February 2014. During the accelerated inquiry, police located a Palestinian resident of Hebron named Hassan Julani, who confirmed that he had indeed been arrested that year for throwing stones at Israeli soldiers, but who denied having been beaten or injured. Issacharoff, on the other hand, claims the police inquiry was negligent and that they had questioned the wrong man, not the one he had abused.

The affair began some six months ago after Breaking the Silence — a nongovernmental organization that documents the abuse of Palestinians by Israeli soldiers — posted a video in which Issacharoff, a former combat officer, recounted how during his military service in Hebron he had beaten a Palestinian in his chest and face until he bled. Publication of his testimony led Shaked to request the attorney general's involvement, but it seems that rather than a desire to see justice done, she was motivated by her desire to bring down his organization.

More than any other human rights organization operating in Israel, Breaking the Silence has borne the brunt of broad public criticism charging that the group defames the Israeli state and the military. Its critics do not necessarily identify with the political right. For example, Yair Lapid, who heads the self-professed centrist Yesh Atid, has personally led a campaign against Breaking the Silence.

Criticism of the organization often focuses more on the manner in which it operates than the substance of its claims, with opponents arguing that its members are active abroad and are turning world public opinion against Israel, even as it has to deal with a murky wave of anti-Semitism, threatened sanctions and international isolation. Nonetheless, some senior defense officials view Breaking the Silence as performing an important service, among them Maj. Gen. (res.) Amiram Levin and former Shin Bet chiefs Yuval Diskin and Ami Ayalon.

The public controversy swirling around the organization’s actions is legitimate. So is Shaked’s request that the attorney general launch an investigation into a former officer who publicly admitted to violating the law. Her motives, however, as well as the supreme effort invested by enforcement authorities to locate the alleged Palestinian victim, point to a double standard and lack of good faith.

If the Israel Defense Forces (IDF), police, state prosecution and other law enforcement authorities, including the attorney general, were as diligent and quick to bring to justice the hundreds of soldiers or Israeli West Bank settlers who reportedly attack Palestinians, the quest for the truth in the Issacharoff affair would have been consistent with the norms of law and order. Shaked, however, was not concerned about a violation of the human rights of a Palestinian. She instead sought to damage Breaking the Silence. As far as she is concerned, any investigative result in this case is a kind of retribution against a group that she perceives as seeking to cast doubt on the IDF’s moral character.

If the investigation had found that Issacharoff had, indeed, beaten a Palestinian, Shaked would probably have demanded that he be punished to the full extent of the law. Since the prosecution found no evidence to support his claim, it could lead to a no-holds-barred war against an organization perceived as spreading lies around the world about the State of Israel.

In May 2016, B’Tselem — another human rights organization that has come under heavy fire in recent years — announced that it would no longer report the abuse of Palestinians to Israeli military law enforcement authorities. The organization claimed that military authorities were not taking its complaints seriously and were failing to punish those responsible for violence against Palestinians in the West Bank, even when all the evidence pointed to a violation of human rights. B’Tselem published data showing unequivocally that law enforcement authorities in the territories hardly lift a finger to prosecute those responsible for such violence.

Since the start of the second intifada, at the end of 2000, B’Tselem had asked the military advocate general to investigate 739 cases in which Palestinians were killed, injured or beaten by soldiers, had property damaged or were used as human shields by IDF troops. No action was taken in one-quarter of the reported cases, or 182 of them. Almost half, 343 cases, were dropped after being investigated. Only in rare cases, 25 to be exact, were indictments served against the soldiers involved. An additional 13 cases were handed over for disciplinary action. At the time of the report’s publication, 132 other cases were in various stages of being processed, and 44 others could not be located by the military advocate. B’Tselem claims that in some cases the military finds “absence of guilt” based on the soldiers’ version of events and sometimes attributes the reported abuse to a “combat event,” which grants soldiers sweeping exemption from criminal investigation.

Another rights organization, Yesh Din, also monitors results when it has sought action by law enforcement authorities against settlers who harm Palestinians. A March 2017 report found that of 89 cases of criminal activity against Palestinians reported in 2015 to Israeli police in the West Bank, only four resulted in indictments. Since 2013, the organization’s activists have been following 289 cases. Only 20 resulted in indictments, while 225 cases were closed with no action taken. In 153 of the cases, authorities reported that the perpetrator was unknown. In 23 of them, they cited lack of sufficient evidence. Seven cases were deemed to be of no public interest. In the remaining open cases, the process has been underway for at least 15 months.

The investigation of Issacharoff’s admission, which lasted only five months, proves that if authorities had really wanted to bring to justice those responsible for attacking Palestinians, they could have done so, rather than declaring the perpetrator unknown or citing insufficient evidence.