Why Breaking the Silence is prime target for Israeli right

The Israeli NGO Breaking the Silence draws more fire than any other anti-occupation organization because it defies an Israeli taboo: discussing the activities of the military. 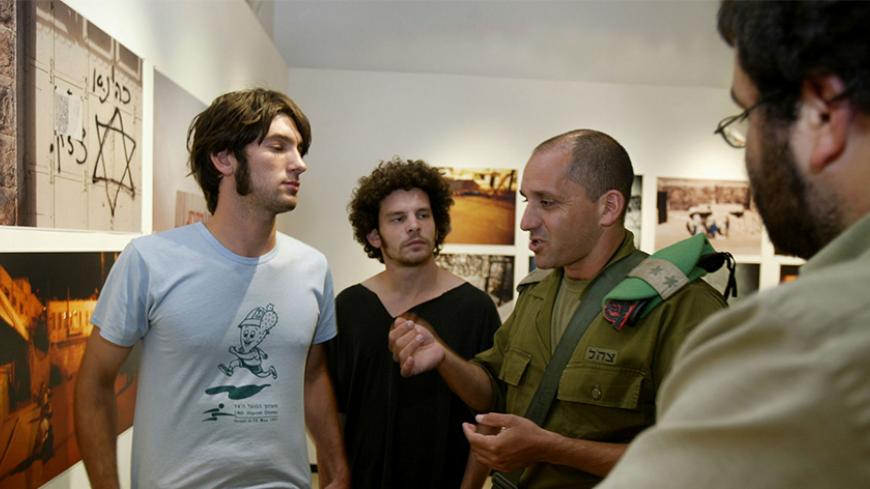 The Israeli occupation of the territories has engendered dozens of human rights organizations and peace movements over the years, and its political right spreads libel about each one. Peace Now “informs” on settlers and their associates. B'Tselem “poisons” the media by spreading video clips showing settlers abusing Palestinians. Yesh Din “snitches” on Jews who “merely” reminded their Arab neighbors who's boss in “Judea and Samaria.” Taayush “collaborates” with “the enemy” — non-Jews who refuse to remove themselves from the land "promised" to the people of Israel. And so on and so forth — some are a “fifth column," and others “Israel haters” and “petty leftists.” But only the activists of one organization, Breaking the Silence, have the dubious honor of being labeled “traitors.” That organization, which has documented and published testimony by military veterans about human rights violations in the territories since 2004, draws more fire than all the other organizations put together.

The Israeli right does not consider the term “occupation” a legitimate one. Thus, any person or organization that defines itself as an activist against the occupation is considered illegitimate. But over the past year, Breaking the Silence has become anathema even in the talking points of Yesh Atid, and the unrestrained incitement against the organization is usually greeted by silence from Labor.

There are those who explain that the reason this group of former soldiers has become the punching bag of the country stems from the fact that it is no longer limiting itself to activity within Israel’s borders. Not only does it publish reports in Hebrew, it translates them into English, gets funding from foreign organizations and individuals, and appears before foreign parliaments. To put it bluntly, many believe that dirty laundry should be washed at home. Not in the foreign media, not in the offices of the European Union in Brussels and not in testimony before an investigative panel of the UN Human Rights Committee. By the same logic, even if the average Israeli concedes that the occupation is a pollutant, he must put up with the smell. A good Israeli must shut the windows and keep the stench at home.

Or perhaps it’s the sensitivity around state secrets that stung Prime Minister Benjamin Netanyahu, who said that the nongovernmental organization is being investigated for trying to obtain classified information. If his record on the subject is anything to go by, Netanyahu would never have been accepted into his own security detail. In June 1995, for example, the young lawmaker disclosed a secret document compiled by a senior officer in the planning department of the Israel Defense Forces (IDF). The document detailed the security arrangements that Israel should demand from Syria in negotiations for a peace agreement. At the time, Netanyahu called the leaker a “patriot.” In September 2007, as opposition leader, Netanyahu broke Israel’s official policy of silence on the bombing of the nuclear reactor in Syria. In August 2014, this time as prime minister, Netanyahu’s name came up in the media as the possible source of a secret presentation shown at a Cabinet meeting. Among his other reasons for refusing to order an investigation of the prime minister, then-Attorney General Yehuda Weinstein cited the possibility that the move would entail questioning very senior Israeli public figures.

Unlike Netanyahu, Breaking the Silence is careful to publish information only after clearing it with military censors. Details that the censor bans from publication or those that are not verified do not see the light of day. The organization made it clear that the censor’s office had approved the publication of most of the testimony recorded by Ad Kan activists and aired on a Channel 2 television investigative report. It was this report that initially claimed that Breaking the Silence was gathering classified operational information unrelated to soldiers’ testimony about human rights violations.

And if Breaking the Silence committed treason and undermined the security of the state, why are its members walking around freely? After all, Ad Kan's dubious allegations about their involvement in the murder of an Arab who died in his own bed resulted last January in the two-week police detention and extensive grilling of activists Ezra Nawi and Guy Boutbiya from the human rights Taayush organization.

In January, Walla published an investigative report on Ad Kan's monitoring activities of anti-occupation groups. According to the report, the project is funded, at least in part, by the Samaria settlers committee, an organization that supports "price tag" attacks and tries to prevent soldiers from discharging their duties in the West Bank, as documented in a 2015 investigation by the Molad research institute. In 2014, the settlers organization, which gets funding from the Samaria regional council — which in turn is funded by the state — gave Ad Kan activists tens of thousands of shekels. Sagi Keizler, head of the Samaria settlers’ council, denied the report but apparently took no legal steps against Walla. The report can still be found online.

Breaking the Silence is being picked on for cynical political reasons. For Israeli Jews, there is no cow more sacred than the IDF. A clear majority, including this writer, served, are serving or will serve in the armed forces, just like their parents, children and even their grandchildren. When Defense Minister Lt. Gen. (Res.) Moshe Ya'alon declares that the members of Breaking the Silence are traitors, he means that they betrayed all Israelis. This is not an argument about occupation, ethics or Israel’s international standing. It's about our lives. Ya'alon was the commander-in-chief of the military, a respected authority on the matter.

The tacit conventional wisdom since the start of the so-called knife intifada is based on Talmudic teachings: “If a man comes to kill you, rise early and kill him first.” Or in common parlance, neutralize him first. Israeli politicians have called for people to do just this when confronted with a possible terrorist. There are even Jews who have already ascribed a broad interpretation to this order. Anyone coming to kill you, in their interpretation, may be a Jew willing to hand over territory to non-Jews. Assassin Yigal Amir, for instance, shot Prime Minister Yitzhak Rabin after rabbis and politicians incited against him and his peace policy. Netanyahu himself took part in a demonstration at which a Rabin cutout dressed in a Nazi SS uniform was held aloft. Today, in his dressing down of the organization, he is dressing Breaking the Silence in the uniform of a kapo.

“Patriots” who beat up Palestinians for kicks on city streets and set a bilingual school on fire have already started sending threats to Breaking the Silence activists and their families, including their elderly grandparents. If, God forbid, anyone is hurt, Netanyahu, Ya'alon and Yesh Atid Chairman Yair Lapid will rush to issue “sharp condemnations” of the criminals. They will surely not forget to attack those spreading incitement, but they might forget or ignore their own past contributions.