Israeli human rights nongovernmental organizations object to an investigative report by Channel 2 that accuses an activist of plotting against Palestinian land owners selling their property to Jews but stained all the NGOs in the process. 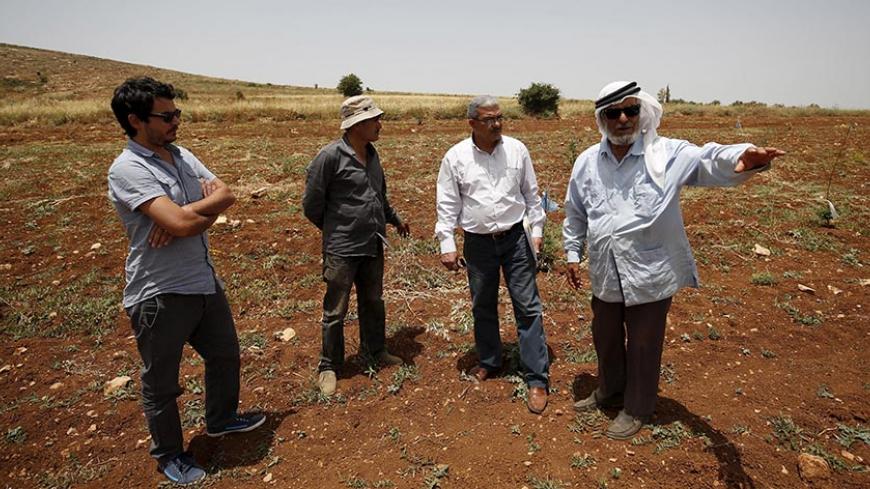 A B'Tselem field researcher (2nd R) listens to testimony from a Palestinian farmer, in the West Bank village of Turmus Aya near Ramallah, June 8, 2015. - REUTERS/Mohamad Torokman

The report focused on two left-wing activists, Ezra Nawi from Ta'ayush and Nasser Nawaja, a researcher for B’Tselem. The two were documented plotting to hand Palestinian land dealers over to the Palestinian Preventive Security Forces for planning to sell land to settlers. The authentic footage was shot with hidden cameras by ''planted'' activists from the previously unknown right-wing Ad Kan group, which according to its members was founded to disclose the tactics employed by left-wing groups in Israel.

The piece at the center of the storm showed Nawi with a huge grin on his face, boasting that a Palestinian land dealer was handed over by him to the Palestinian security forces, and that he was effectively responsible for his death.

Activists from left-wing groups offered three responses to the report. The first was that the program’s editorial board relied on footage from a right-wing organization that no one had heard of before the report aired. The second was that the Palestinian Authority hasn’t executed anyone since 2006, so Nawi was just bragging — and so his words should not be taken seriously. The third and most important claim was that the report completely ignored years of important work by human rights organizations in Israel and gave the false impression that left-wing groups employ unscrupulous methods.

Michael Sfard, a prominent civil rights attorney, argued on his Facebook page, for example, “The report, its editing and the accompanying text led the public to believe that everyone acts this way … and it is difficult not to see the connection to the campaigns of the last two weeks by [Justice Minister] Ayelet Shaked, [right-wing organization] Im Tirtzu, [Education Minister Naftali] Bennett and the prime minister against these organizations.”

Prime Minister Benjamin Netanyahu was also quick to respond to the report. On his Facebook page, he wrote, “The report revealed the true face of the extremists among us, whose hatred of the settlement enterprise has literally driven them insane. … Anyone who encourages murder cannot keep hiding behind that mask of hypocrisy called ‘concern for human rights.’”

In response to these comments, human rights activists insinuated that the group Ad Kan could be funded by the prime minister’s confidant, American casino mogul Sheldon Adelson. However, such a claim is irrelevant and actually harms the activists themselves. In addition, for several years now, B’Tselem has run the "Camera Project," where Palestinians use cameras provided by the organization to document violence against them by settlers or soldiers. Footage shot in Hebron was even turned into the film "Smile, and the World Will Smile Back," which was screened at many major international film festivals, including the prestigious Hot Docs Film Festival in Toronto.

There is no question that the footage taken by Ad Kan plants is authentic; the fact that it was filmed with hidden cameras does not detract from its severity.

The TV report provoked loud objections on the part of left-wing organizations. They claimed — and justly so — that even though Nawi and Nawaja acted on their own behalf, the ''Uvda'' editorial board depicted a generalizing and misleading picture. They argued that by doing so, ''Uvda'' stained the actions of those left-wing organizations objecting to the occupation: B’Tselem, Peace Now, Yesh Din, Ta'ayush and the most controversial of all, Breaking the Silence. All these organizations have been active in the field for years, providing the Israeli public with the kind of perspectives and images of the occupation that most Israelis would generally rather not see.

Nawi is not a legitimate example of how these groups have operated over the years. Nawi was convicted in the past for sexual assault of a Palestinian minor, and he was also accused of the illegal use of guns, growing a controlled substance and assault, and even served two terms in prison. Every time he was arrested or convicted, he received the support of human rights activists, who asked that he receive clemency for his illegal activities. In 2009, former Deputy Attorney General Judith Karp testified on his behalf, describing him as the “savior and redeemer of the [Palestinian] population. You could call him the Robin Hood of the Wild West.”

The report’s coverage of the role he played as a kind of Robin Hood on the ground delivered a resounding blow to the already controversial image of human rights organizations in the eyes of part of the Israelis.

Nawi does not represent B’Tselem or Yesh Din, nor was he supposed to represent Ta'ayush. If anything, Ta'ayush should be challenged as to why it allowed Nawi the freedom to act under its name. But instead of distancing itself from him, his braggadocio and the way that he praised people allegedly paying for what they did with their lives after he turned them in, the organization chose to act in a strange manner.

The Ta'ayush Facebook page practically became a battlefield between right-wing and left-wing organizations. It showed photos of the “plants” that brought Nawi and the organization down. Among other things, it said there “Itzik Goldway is about 23 years old, a reserve sergeant [with the Israel Defense Forces]. In February 2015, he was decorated for his part with 'Operation Protective Edge.' He and his friend Julia were sent to infiltrate Ta'ayush. They [the plants] are proof that within every Israeli lies a little Shin Bet agent until proven otherwise. After the incident, they went traveling in the Far East.”

The same is true of B’Tselem. Rather than distancing itself from its researcher’s activities, the organization chose to respond in a questionable manner, saying, “The report in no way dealt with the work Nasser Nawaja did with B’Tselem.” The official response continued, “If, however, our name has been brought up, it is important that it is placed in the proper context. The settlers of Mount Hebron will use any means at their disposal to seize control of Palestinian lands in the region, with the support of the state, to dispossess the inhabitants and expel them from their homes. The fact is that approaching the appropriate authorities on this matter can in no way be considered ‘turning them in.’”

Assanheim’s investigative report was undoubtedly important. It was certainly one of the most dramatic reports aired in Israel over the last few years. It offered a rare glimpse at the Wild West that the West Bank has become in the past few decades. This is all the more important because the Israeli public tends to show little interest in the war that is taking place between the settlers and the Palestinians, and between activists on the left and the right.

The tempest that resulted from the report shows that the battle between left- and right-wing organizations in Israel has reached the point of no return. On the ground, they have adopted the very same methods of fighting more commonly used by bitter enemies. Methods of sending spies to penetrate each other’s organizations, disclosing the names of activists and depicting them as traitors, turning people in to the authorities and celebrating their executions — though, in fact, no one has actually been executed. It would not be an exaggeration to say that the very terminology used by leading activists echoes with the kind of demonization more commonly found among enemies.

Israel seems to be already mired in a civil war. How tragic it is that its leaders are joining the call to battle.