Israeli civil society, left-wing camp back in the game

The Israeli left-wing camp and human rights organizations seem to have woken up and are ready to fight the Netanyahu government and its occupation policies. 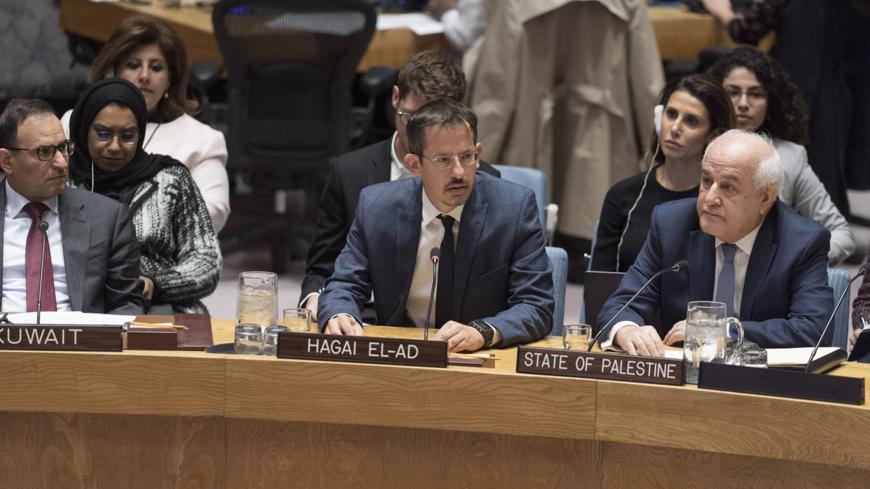 Speaking at the opening session of the Knesset’s winter session Oct. 15, Prime Minister Benjamin Netanyahu praised a "fantastic decade" Israel had experienced under his stewardship, hailing a "cool country" and boasting of its “diplomatic flowering.” But Netanyahu’s list of achievements was soon overshadowed by events.

First came the Oct. 18 Supreme Court ruling overturning the state’s decision to bar the entry of American student Lara Alqasem, who was accused of supporting the anti-Israel boycott movement. On the same day, the UN Security Council gave the floor to the director of the Israeli B’Tselem human rights organization, Hagai El-Ad, who urged the international community to end the injustice of Israel’s occupation of Palestinian territory. Heavy international pressure forced the government to suspend the forced evacuation of the Bedouin village of Khan al-Ahmar in the West Bank on Oct. 21. The same day, Jordan announced it would not renew the 25-year land lease arrangement under its 1994 peace treaty with Israel that has enabled Israeli farmers to cultivate lands along the border leased from the Hashemite Kingdom.

And while these diplomatic failures were piling up on the political right, Israel’s parched civil society started sprouting buds of regeneration. Strapped human rights organizations, the renowned Hebrew University, left-wing Knesset members and a handful of journalists have successfully taken on a wealthy government machine armed with sophisticated spy and surveillance technology and aided by hundreds of diplomats deployed around the world, a sympathetic media and right-wing organizations flush with funds from foreign donors.

In a hysterical reaction to the top court’s decision on Alqasem, Minister of Public Security Gilad Erdan tweeted that the justices had “handed a major victory to BDS [the boycott, divestment and sanctions movement] and made a mockery of the law that bars the entry of boycott activists into the country." Erdan accused the three judges of “completely failing to understand the way the BDS organizations operate.” Indeed, the decision to allow the 22-year-old American to study at the Hebrew University in Jerusalem is a major victory for the BDS movement, but not because the judges don’t understand the despicable modus operandi of the anti-Israel boycott organizations. The victory lies in the success of Israeli human rights groups and of the Hebrew University (who joined Alqasem in her petition against the state) in exposing the McCarthy-era tactics of Erdan and his partners. The hundreds of headlines in the world’s most influential media describing Israeli authorities’ abuse of the young student blared out news of the victory.

The information about Alqasem’s anti-Israel campus activities at the University of Florida came from Canary Mission, a right-wing organization that monitors pro-Palestinian activists on American college campuses. However, the High Court ruled that Israel’s Interior Ministry did not have any proof of Alqasem’s boycott activities after April 2017 other than “mysterious indications.” The justices affirmed the arguments put forth by Israeli and international human rights groups that Alqasem was denied entry “because of the views she holds” and warned that if this is indeed the case, "It would be an extreme and dangerous step that could lead to the crumbling of the foundations of Israeli democracy.”

In the Khan al-Ahmar case, the Supreme Court actually sided with the government’s decision to evict the residents in order to make way for expansion of a nearby Israeli settlement, rejecting residents’ appeal. Nonetheless, the security cabinet decided Oct. 21 to delay the evacuation of the small village, a decision attributed largely to human rights activists, who urged European governments to pressure Netanyahu into setting aside the eviction order. The determined stand of Israel’s civil society and the high media profile it engendered led the chief prosecutor of the International Criminal Court in The Hague, Fatou Bensouda, to warn Oct. 17 that expelling the residents could constitute a war crime.

Despite Israeli protests, the UN Security Council once again invited B’Tselem director Hagai El-Ad to address the forum Oct. 18 about the injustice of Israel’s occupation. The vitriol directed at him after he spoke at the Security Council two years ago and the expected attack by Israel’s UN Ambassador Danny Danon, who called him “a collaborator” with Israel’s enemies, did not deter El-Ad from urging the international community to take practical measures against the continuing occupation. “You will never silence us,” El-Ad hit out at Netanyahu, “nor the hundreds of thousands of Israelis who reject a present founded on supremacy and oppression, and stand for a future built on equality, freedom and human rights.”

There are other indications of the revival of the political left. A group of peace activists calling itself the Policy Working Group decided for the first time to fight back against NGO Monitor, an organization that since 2002 has been persecuting human rights organizations in Israel. The Policy Working Group, made up of retired diplomats, academics and human rights activists, and chaired by former Israeli ambassador to South Africa and a member of the left-wing Meretz party, Ilan Baruch, has been investigating NGO Monitor, which portrays itself as an independent, apolitical research institute. A detailed report on the investigation, published in recent weeks, has exposed close cooperation between NGO Monitor and the Israeli government.

NGO Monitor was established by Dore Gold, who previously served as Netanyahu’s ambassador to the UN and as director general of the Foreign Ministry, and by Gerald Steinberg, formerly of the prime minister’s office and the Foreign Ministry. Yosef Kuperwasser, a former director general of the Ministry of Strategic Affairs who now heads the Kela Shlomo organization established by the government to fight the BDS movement, is a board member of NGO Monitor. Members of the international board include or have included the Trump administration's national security adviser, John Bolton, who opposes the two-state solution and Palestinian self-determination; former deputy national security adviser Elliott Abrams, also known for his hawkish views; and former CIA Director James Woolsey, another like-minded member of the same camp.

The report notes that in order to blur its affinity for the right-wing government, NGO Monitor cooperates with Knesset member Yair Lapid, head of the centrist opposition party Yesh Atid. In June 2017, the organization funded Lapid’s trip to Spain to promote its annual report and an information campaign against Spanish funding of Palestinian nongovernmental organizations. As the Political Working Group notes, so far Israeli human rights and peace groups have refrained from dealing with NGO Monitor, which is known for its aggressiveness. “Times have changed,” Baruch told Al-Monitor. “It is time for the forces promoting universal values of freedom and equality to shift from defense to offense.”