Why human rights NGOs are losing support of Israeli public

Human rights nongovernmental organizations are confronted by an increasingly difficult battle over Israeli public opinion, which often considers them illegitimate or hostile as they criticize the elected government. 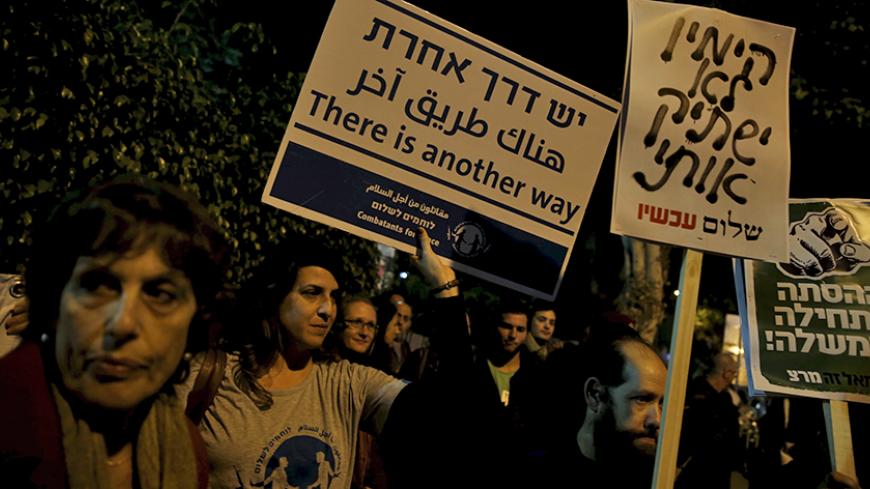 The speech delivered by B’Tselem executive director Hagai El-Ad at the UN Security Council Oct. 14 generated a political storm last week in Israel. While the angry responses did not surprise anyone, bad timing contributed to the public furor: The speech was delivered only 24 hours after UNESCO passed a resolution that denies the connection of the Jewish people to the Temple Mount and the Western Wall in Jerusalem.

Between the lines, in his reactions to the speech, Prime Minister Benjamin Netanyahu compared the B’Tselem activists to traitors and threw all the Israeli human rights organizations to the dogs. But beyond Netanyahu’s anger and his irresponsible attacks against B’Tselem, El-Ad’s speech raised all the main issues that concern Israeli society regarding these organizations. Is it legitimate for Israeli sources to express criticism of the occupation and the enlarging of settlements in an international forum? Have the organizations’ key activists crossed redlines in their human rights activities and entered the domain of governmental political activity? And finally, are the organizations investing their efforts on the global front because they have lost all hope of generating change in Israeli public opinion?

Following the attack on him, El-Ad explained in a Haaretz article that “the world’s intervention against the occupation is legitimate, like any issue connected to human rights. This is all the more true with regard to an issue like our control over another nation: This is not an internal Israeli issue. It is clearly an international one.”

Most of the human rights activists agree with this position. They believe that the continuation of the 50-year-old occupation, with no end in sight, is not a purely political-governmental issue, but clearly an issue of the violation of human rights. To their critics they respond that even Netanyahu, who likes to belittle the UN, stands up year after year to deliver a speech at the General Assembly meeting. In addition, all the right-wing movements have international departments and send their representatives to Jewish communities throughout the world in order to present their worldviews and the importance of Jewish settlement in all parts of the land of Israel (term used by the right wing for Israel and the West Bank). How can this be permitted to the prime minister and right-wing activists, yet forbidden to left-wing organizations?

The Peace Now movement was also invited to the discussion in the Security Council on the Israeli occupation, but the movement heads decided not to participate. Peace Now director Avi Buskila told Al-Monitor that they turned down the invitation because they felt that the damage caused by their appearance at the discussion would outweigh any possible advantages. He said, “My theory is that we need to operate within Israeli society. We did not participate because we didn’t want an Israeli representative at the discussion out of the concern that we will alienate the [Israeli] public, and will be difficult for them to listen to us afterwards. Now our goal is a discourse within Israeli society, most of which does not support annexation of the territories. I am not partner to the presumption that the Israeli public has lost its ability to wield influence; the contrary is true. Most do not support annexation of the territories.”

The organization that absorbs the worst attacks in Israel, mainly due to its activities on the global stage, is Breaking the Silence, which collects testimonies of Israel Defense Forces soldiers who served in the West Bank. Avner Gvaryahu, in charge of the overseas activities of the organization, told Al-Monitor that Breaking the Silence has definitely not given up on trying to influence Israeli public opinion. He said that in this last year, almost all of Breaking the Silence’s planned events in Israel were accompanied by the pressure to cancel. Sometimes, security officers were hired to protect the participants. “If we thought we have no chance of convincing the Israeli public about ending the occupation, we wouldn’t be trudging from event to event and fighting for our rights to be heard everywhere that people want to hear us,” Gvaryahu said. He added that despite the attacks on them and the attempt to categorize them as traitors, the recent year was a record year in their educational work.

According to Gvaryahu, “Since the occupation is not only an internal Israeli issue, we also operate on the global arena as well. I myself spoke at the UN two years ago. Does that mean that I am a traitor? Certainly not. It is a legitimate platform, and the Security Council is a relevant group. It is important that information reach them, too.” Gvaryahu held a series of lectures and meetings this past year on American campuses, with the goal of showing that large sections of the Israeli public oppose the occupation policy. “It is clear to us that the decision to end the occupation will be taken in Jerusalem and not on the campuses, but it doesn’t happen because of the blind support provided by American Jewish communities to Israel, sometimes due to lack of knowledge as to what is taking place in the territories. That is why it is up to us to bring the data to them.”

Whether the Security Council is an appropriate place for a discussion on the issue is certainly a controversial topic, even among human rights organizations. One thing is clear: The activities of these organizations on the international stage is clear proof to the world that the entire Israeli public does not support the continuation of the occupation, and this voice must be heard. The Peace Now director said that while the public understands that the vision of the two-state solution must be realized, there are barriers to that vision due to legitimate fears that must not be belittled. “I grew up in the Galilee [a northern Israeli region near the Lebanese border], and when my mother said she was afraid of the katyusha [rockets], she really was afraid. We must invest most of our resources in dismantling this fear and explain that an agreement or diplomatic process is inevitable. Yes, a price will be paid. What will be the price? The dismantling of the settlements. But there will also be benefits.”

However, despite these words, it is clear that the Israeli public is not only concerned about the security-related issues connected to a political agreement, but also the one-sided, unbalanced UN resolutions that are sometimes even outrageous.

In the Security Council, El-Ad claimed that he came as a worried Israeli. He was probably aware that he took a huge wager — that his organization might lose another segment of Israeli public opinion as a result. But let us remember another incident: the dissemination of the B’Tselem video in March that documented the shooting of a neutralized terrorist by soldier Elor Azaria in Hebron. Thus, the organization has indeed demonstrated to Israelis and the world the reality of the occupation much more clearly than any speech delivered by an Israeli representative on the same platform in New York.