Is Israeli media blurring the line between news and propaganda?

The investigative report of Israeli TV Channel 2 accuses NGO Breaking the Silence of endangering IDF soldiers, without balancing its report or verifying its information properly. 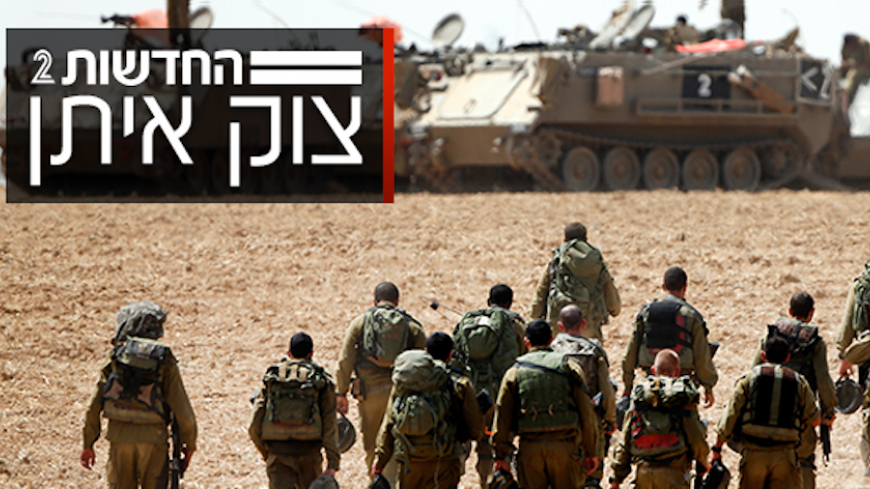 Israeli Channel 2 aired on March 17 an investigative report documenting the activists of the Breaking the Silence organization allegedly collecting classified information about Israel Defense Forces (IDF) activity. In one of the high points of the report, former Shin Bet chief Avi Dichter makes an appearance. Dichter, who is currently a Likud Knesset member, responds to the investigative material by telling the Channel 2 interviewer in a worried tone, “If you hadn’t told me the background, and told me what I was watching, I would have said it looked like information gathering by the handlers of an agent.” Dichter concluded with the following punchline: “and I didn’t hear a word about Palestinians or Gazans.” The words of the former Shin Bet chief were designed to back up what was presented as a Channel 2 investigative report. But in reality, it seemed like a propaganda clip of the right-wing Ad Kan ("No More") nongovernmental organization (NGO).

The Ad Kan people were the ones to supply the ostensibly incriminating material to Channel 2. In the last two years, the Ad Kan organization planted its activists in Breaking the Silence, an NGO that attempts to fight against the occupation by revealing testimony of soldiers about their army service in the territories, during conflicts and also during daily life.

In an attempt to give the report a serious dimension, Channel 2 correspondent Ofer Hadad said, “At our request, we received all the unedited materials from all those hidden cameras. Unedited, not shortened. Hours of meticulous questioning and, yes, some of the evidence deals with questions regarding IDF activity in the territories.”

On the assumption that Hadad indeed viewed all the long, jam-packed, unedited filmed materials, and all that he succeeded in collecting from them was barely 2 minutes of “transmission of [ostensibly] classified material” on weapons and events that can be read about in any newspaper, it is not at all clear what new details were disclosed by his work, if at all. And what about most of the material that was not broadcast; material that probably featured problematic behaviors of IDF soldiers in the territories? Dichter did not hear a word about Palestinians only because Channel 2 did not air those sections of the evidence.

Former head of Israeli Central Command Maj. Gen. Avi Mizrahi said in the report that the confidential material could cost human life. But Hadad and his apparatus did not need dramatic accusations leveled by Mizrahi or Dichter as to whether their report was serious, in-depth and tight, and met press standards. What Hadad did bring is information collected by a right-wing organization in its war against Breaking the Silence. Thus, there is a significant and substantive problem in presenting that information as the result of an “investigative report.” If Channel 2 had planted its own reporter inside Breaking the Silence, the situation would be different. But for considerations of ratings and left-wing bashing, something that has become popular recently in the Israeli public, Israel’s senior news provider chose to act like a member of the Ad Kan NGO.

Israeli democracy can contain the two organizations — the left-wing organization presented by Channel 2 as an Israel hater (Breaking the Silence), and the right-wing organization, presented as patriotic (Ad Kan). There is room for both, and both are important. But Israel’s key television channel that broadcasts Israel’s most watched news edition in the country cannot take an active part in this war. It cannot be a proxy of either side.

As expected, the report aroused a storm. This time, not only right-wing politicians accused Breaking the Silence of treason, but those affiliated with the center-left also accused them. Statements were released by a gamut of politicians, from Yesh Atid Chair Yair Lapid to Zionist Camp Knesset members Eitan Cabel and Itzik Shmueli, who accused Breaking the Silence of activities against the State of Israel. Within minutes of the airing of the report, the prime minister accused Breaking the Silence of crossing “a red line," and said the issue “is being dealt with by the relevant authorities." Following Netanyahu’s announcement, Defense Minister Moshe Ya'alon announced that he instructed the IDF to launch an investigation to see whether released soldiers who finished their compulsory service revealed classified information about their service. Afterward, Ya’alon accused the organization of treason, saying, “If they use this secret information outside of the country, or if they distribute this information and these documents outside of the country — this is treason. Even if they keep the information to themselves — it is still treason. Who is holding these documents? Why do they [Breaking the Silence] need to know what weapons we use in the air, on land, etc., and how they're used?”

If Ya’alon and Netanyahu are claiming that treason is involved, they should see to it that all those involved should be detained and investigated. All existing criminal tools should be used against them. But they won’t take this path since they also realize that such an investigation would quickly boomerang on them, for two reasons. First, because similar activities are carried out by the right wing as well, and second, because such a radical step would have an adverse effect on basic human rights such as freedom of speech.

As far as the news department of Channel 2 is concerned, it has scored a success: It generated a political storm that caused all the networks to roll in arguments and debates. These arguments often included calls for tarring and feathering the Breaking the Silence people. But for ethical journalist practice in this investigative report, Channel 2 deserves a failing score. The Ad Kan organization could not have asked for better news coverage. Instead of simply uploading the information it collected on its Internet site, Channel 2 “adopted” Ad Kan’s material. This lent the material the appearance of, and presumed validity of, objective journalism.

There may be, perhaps, one positive result of this affair. Perhaps, after this incident, Netanyahu and other right-wing politicians will stop blaming the media for operating in the service of the left. But when taking into consideration the feelings of the public vis-a-vis the Israeli press and the electoral benefits involved in bashing the left, we can assume that no such change is in the offing.