The effort to break Breaking the Silence

The Israeli right wing appears to be succeeding in wrongly portraying the campaign of Breaking the Silence as a threat to the state and the Israeli military. 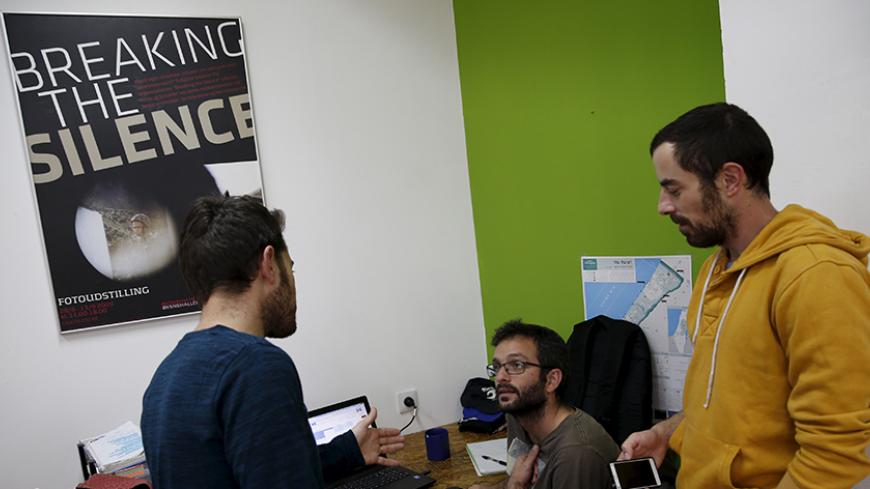 Employees work at the office of Breaking the Silence in Tel Aviv, Dec. 16, 2015. An ultranationalist Israeli group has published a video accusing the heads of four of Israel's leading human rights organizations, including Breaking the Silence, of being foreign agents funded by Europe and supporting Palestinians "involved in terrorism." - REUTERS/Baz Ratner

Any outsider who has spent the past few months listening in on Israelis' public debate over Breaking the Silence might think that it is a vast organization employing thousands of activists. That person would also have reason to believe that the group is ultimately responsible for all of Israel’s security woes.

Breaking the Silence was founded 12 years ago by Yehuda Shaul, a retired Israel Defense Forces (IDF) officer who had served in Hebron. Shaul, now in charge of the group’s overseas activities, holds one of just 12 paid positions in the entire organization. For the most part, Breaking the Silence relies on a handful of volunteers, who collect testimonies from soldiers. They are recruited ad hoc in response to specific events, such as the 2014 Operation Protective Edge.

In fact, the group’s last comprehensive report was published in May 2015. The report contained testimonies from soldiers who had participated in Operation Protective Edge in the Gaza Strip indicating that individual soldiers, not the IDF as an institution, allegedly engaged in war crimes during the fighting. At the time of the report’s release, the group also published a sleek booklet in English intended for international distribution. For the most part, the rage vented at the group in Israel can be attributed to the release of the report overseas, compounded by the activities of its members beyond the narrow confines of Israel.

The person drawing the most fire is Avner Gvaryahu, a prominent Breaking the Silence activist whose official position is coordinator of outreach to American Jewry. Breaking the Silence believes that it is impossible to shift the public discourse in Israel from within and promote the processes necessary to end the occupation. Therefore international pressure is required. In January, a recording was made public in which Alon Liel, a former Foreign Ministry director general, is heard briefing Breaking the Silence activists and recommending that they extend their activities to Jewish communities and decision-makers overseas.

It seems as if this is Breaking the Silence’s basic mistake, and its most auspicious mistake as well. By making the strategic decision to appeal to the international community, the group shot itself in the foot and lost what little legitimacy it had among Israelis. It went from being a tiny organization with no say whatsoever to the target of Israeli decision-makers, who blame it for almost all the country’s ills.

This seemingly insignificant organization has been turned into a means of diverting the public discourse from the diplomatic stalemate, the increase in terrorism and the overall gloomy horizon. Instead of concentrating on major issues, Israelis are now focused on one small group. Ironically, in its 12 years of existence, Breaking the Silence never really made an impact on Israeli public opinion, and whatever influence it may have had has now been diminished even more so.

Breaking the Silence was also never especially influential internationally. It is not some powerful organization with branches all over the world. When Gvaryahu speaks on campuses in the United States, he is merely preaching to the choir, addressing an audience that already agrees with him and is not particularly inclined to favor Israel in the first place. The activities conducted by Gvaryahu and volunteers who lecture overseas are just a drop in the proverbial bucket.

In contrast, Hillel, the largest Jewish student organization in the world, has a well-established and well-oiled infrastructure and a presence on virtually every college and university campus in the United States. The group’s representatives take part in opposing the boycott, divestment and sanctions movement advocating a boycott of Israel, and they promote the image of “the other Israel,” the one unrelated to the occupation that usually doesn't appear on television. The impact of that group on American students, Jewish and non-Jewish alike, is many orders of magnitude greater than that of Breaking the Silence and its activists, who might lecture in the United States once every few months.

On March 17, Channel 2 News aired an “investigative report” about Breaking the Silence, based on questionable recordings that the news desk had received from the right-wing organization Ad Kan (No More). The report claimed, among other things, that Breaking the Silence had collected classified information from soldiers. Immediately after the report was aired, Prime Minister Benjamin Netanyahu rushed to announce that he had instructed Israel’s security forces to investigate the organization. Defense Minister Moshe Ya’alon went so far as to accuse the group of treason.

According to Yuli Novak, director general of Breaking the Silence, the testimonies published by her organization are submitted to the military censor and are not released unless the group receives explicit permission to do so. Regardless, her comments did nothing to moderate the whirlwind of attacks against the organization or its members.

Who cares if the group never actually compromised the IDF or that it is highly doubtful that Breaking the Silence ever planned to violate military confidentiality or set that as its goal. What matters is that Israelis have a new enemy that they can blast with all the power and means at their disposal.

In conversations with Al-Monitor, members of Breaking the Silence said they worry that the incitement against them will eventually end in murder. Novak even complained to the police that her family has been threatened. In Israel, the distance between calling someone a “traitor” and actually pulling the trigger might not be so great, something Israelis have already witnessed.

Furthermore, Breaking the Silence activists are convinced that the attacks against them are orchestrated. They think it is easy for Netanyahu to paint them as the dangerous new enemy and to blame them for all of the country’s existential anxieties.

Now that the Iranian nuclear threat has practically vanished from the headlines, the threat from the Islamic State feels distant and Gaza is relatively quiet, what else does Netanyahu have? How can he keep the public on edge when all the old familiar threats are no longer available? Well, now he has Breaking the Silence.

True, several former security chiefs have come to the group’s defense, among them former heads of Shin Bet Yuval Diskin and Ami Ayalon and a former deputy director of Mossad, Amiram Levin. They claim that Breaking the Silence is important for the preservation of Israel’s democracy. Still, that doesn’t matter to anyone.

It looks as if the public’s negative attitude toward the organization has already been formulated and etched in stone. The same is true of the attitudes being expressed across the political spectrum, from Netanyahu to Yesh Atid Chair Yair Lapid. It is convenient for all of them to exaggerate the importance of Breaking the Silence and unite the Israeli public in a campaign against it.