Why one Israeli campaign is calling artists 'traitors' 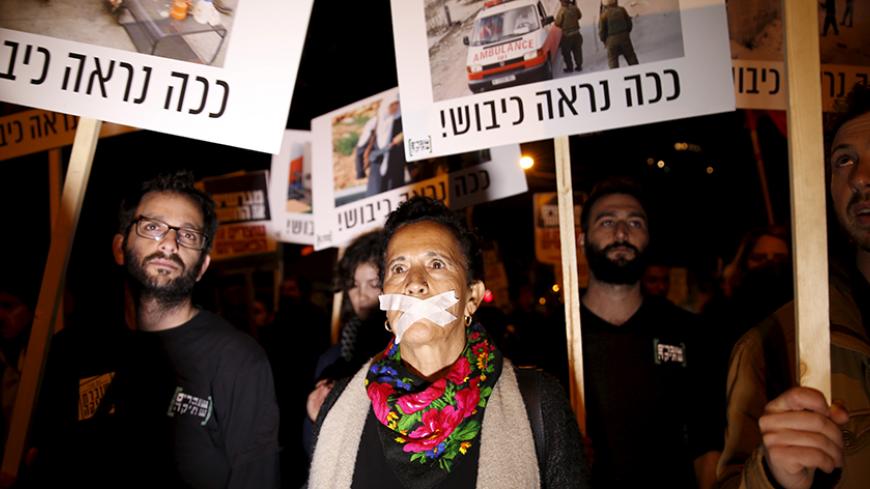 About a week ago, the far-right organization Im Tirtzu ran a billboard campaign dubbed "cultural plants" (also known as “moles in culture” or “foreign agents”), denouncing artists and intellectuals who support peace and human rights organizations. The campaign seems to have come to a very happy end. The heads of the organization have accepted “full responsibility for their erroneous post.” They even thanked those “who pointed out the mistake” to them.

The campaign had met a barrage of condemnations from across the political spectrum. Defense Minister Moshe (Bogie) Ya’alon said, “This instigating campaign does not represent the moderate right, and certainly not the Likud Party and its values.” The chairman of HaBayit HaYehudi, Education Minister Naftali Bennett, tweeted that the campaign was “embarrassing, unnecessary and humiliating.” Minister of Culture and Sport Miri Regev tweeted, “Insulting people based on their views is unacceptable.”

After a slight delay, Prime Minister Benjamin Netanyahu joined the chorus, saying he “opposes the use of the word ‘traitor’ to describe those who disagree with me,” and added, “We are a democracy and there is [room for] a multitude of opinions.”

It goes without saying that the opposition seized the opportunity to denounce the insult against Israel’s artists. The chairman of the Zionist Camp, Isaac Herzog, described the campaign as “McCarthyism” and opined, “The good-for-nothings leading the campaign will disappear, as they did in the United States. The only question is when and at what cost to us.” The chairman of Yesh Atid, Yair Lapid, cried out that “the insanity must stop” and insisted, “This is the time for everyone who cherishes the State of Israel to take a stand against this wild incitement.”

So, has Im Tirtzu learned its lesson? Not really. In a statement, the heads of the organization stressed that they had not labeled the artists “traitors” and had only added them to the list of “plants” who support human rights organizations. (Full disclosure: Your author is included in this list.) The half-hearted apology read, “We are proud of our 'foreign agents' campaign and it will continue.”

There is no indication that the political establishment intends to stop the persecution of these organizations, either. Netanyahu will soon obtain Knesset approval for the “transparency law,” which has already been green lighted by the government. This bill is designed to portray nonprofits dedicated to the protection of human rights and transparency as collaborators with Israel’s enemies abroad. Bennett will invariably keep weeding out the leftists from the Ministry of Education, Ya’alon will carry on with his boycott of the Breaking the Silence organization and Regev will continue promoting her plan to make the funding of Israeli artists contingent on their allegiance to the symbols of the state.

In expressing his condemnation of the Im Tirtzu campaign, Netanyahu made sure to tack on, “The public is strongly opposed to Breaking the Silence, which libels Israel abroad.” First he incites the public against the organization, and then he declares that the public is “strongly opposed’ to its activities. Herzog did not see fit to offer the “planted” human rights activists something of the feistiness he displayed with regard to the artists who support them. He, too, preferred to protest the airing of dirty laundry that he and Netanyahu can live with in the privacy of their homes, so long as the neighbors can’t see it.

Lapid did not retract the foolish equivalence he drew between members of Breaking the Silence — former soldiers fighting against the injustice of the occupation — and the thugs who commit those injustices, those recorded dancing at the so-called "hate wedding." It’s far more acceptable to defend a bereaved father like writer David Grossman against a radical right-wing organization than to condemn the police for false imprisonment of leftist activist Ezra Nawi of Ta'ayush. It’s easier to attack Im Tirtzu for insulting well-known theater actors than to speak out against the systematic persecution of human rights organizations.

Where were they all in 2010, when Im Tirtzu ran billboards featuring the new president of the New Israel Fund Naomi Chazan with a long nose and a green horn on her forehead? Chazan was deemed guilty of being behind her organization's support for those who dared to publish data regarding IDF actions during Operation Cast Lead. The only politicians who came to her defense were her former colleagues from Meretz — a party she had once represented in the Knesset.

The Israeli Union of Performing Artists expressed shock at “Im Tirzu’s persecution campaign, which labels our country’s best artists as ‘plants’ or, in other words, ‘traitors.’” Prominent artists took to the cameras and microphones to express their disgust with the Im Tirtzu campaign. But several days earlier, it was reported that the union had decided to bestow a lifetime achievement award on singer Ariel Zilber, who makes Im Tirtzu look like a radical leftist group. In explaining its decision, the prize committee cited Zilber’s “songs and hits that formed the groove” of Israeli music. Among the songs he wrote one can find the ditty “Kahane was Right,” referring to ultra-nationalist Rabbi Meir Kahane, whose party was banned from running again for the Knesset in 1988 over its practices of racist incitement.

The ruminations of the honoree include expressions of empathy for the motives of Prime Minister Yitzhak Rabin's assassin, Yigal Amir; a call for Israeli soldiers to disobey orders to evacuate the Gush Katif settlements in Gaza; and contempt for gays, secular Israelis and the State of Israel. The award would not have drawn attention were it not for singer Ahinoam Nini's decision to withdraw from the union in protest. Nini wrote on Facebook, “In such very dark times, when books are being banned and blacklists are being circulated, the Union of Performing Artists chooses to award a lifetime achievement prize to a man who used his great talent to promote the same kind of agenda — of violence, racism and hate.” None of the artists who went out of their way to condemn the campaign against their colleagues joined Nini, who is undeterred by curses, threats and boycotts.

In the coming days, Israel’s most prominent artists will take part in a protest rally being organized in Tel Aviv by the New Israel Fund for Feb. 5. They should invite Bennett, Lapid, Herzog and Regev. After all, these politicians all condemned the campaign against the artists. Netanyahu can ask his favorite singer, Amir Benayoun, to go on stage and sing his hit song about an Arab student in Jerusalem, the one that goes, “It's true that I am ungrateful scum. … It’s true that the moment will come when you will turn your back on me, and I’ll stab you right in the back.”

In response to the witch hunt against the artists, Netanyahu said, “We are a democracy and there is [room for] a multitude of opinions.” Im Tirtzu will continue to give Israeli democracy a bad name, and those spreading the venom against the “plants” will keep uprooting what little democracy the government leaves intact. As long as Israeli artists are not offended.