Israeli leftist artists, the enemy within

As far as Culture Minister Miri Regev is concerned, all intellectuals who do not agree with her right-wing agenda are enemies of the state. 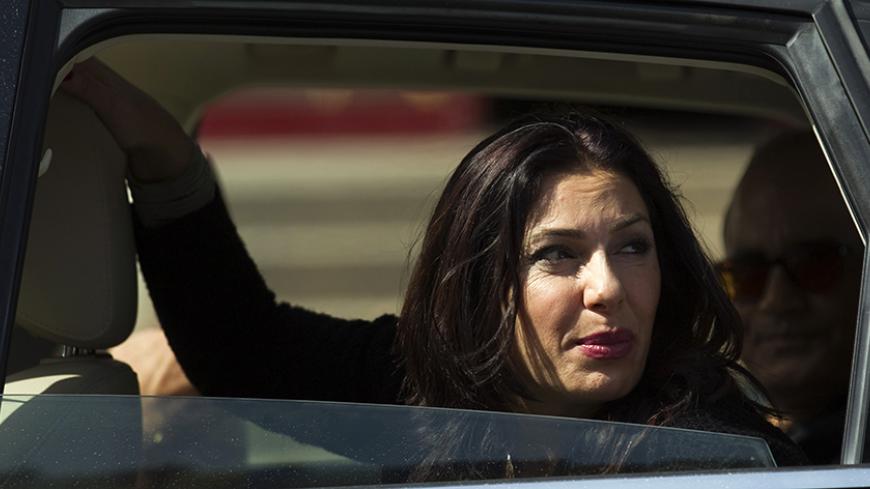 Minister of Culture Miri Regev has been swept up by a wave of support, especially from the far right, for advancing the “No Loyalty, No Budget for the Arts” Law. It is what carried her to the premiere of "Evita" at the Habima National Theater in Tel Aviv the night of Jan. 27.

Just a few hours earlier, she had been involved in an impassioned argument with opposition Knesset members during a discussion by the Education and Culture Committee. On the table was a law she proposed to deny state funding to cultural institutions that allegedly assailed state symbols. “Cultural organizations that undermine the state will be denied budgets from the state,” Regev said during the debate. “Cultural institutions are not above the law. … Miri Regev did not come up with this law or that. All I want to do is enact a simple law that says that the minister who releases money can also prevent that money from being released.”

Regev’s proposed law sounded vaguely familiar to veteran Knesset members. Combing their memories, they recalled an amendment to the Cinema Law proposed by former Knesset member Michael Ben Ari of the Ichud Leumi faction in 2010. Regev and Ben Ari both used the term “freedom of funding” in their proposals, which described how they wanted to grant the government the right to deny funding from institutions of its choosing.

It would therefore seem that Regev’s law was inspired by one of the most radical Knesset members ever to serve in that august body. The one difference is that while Ben Ari held no senior position and was effectively a parliamentary backbencher, Regev is a senior politician and an influential minister from the ruling party, and ironically, that party has its roots in liberalism.

Throughout the Knesset debate, Regev referred to herself repeatedly in the third person, causing considerable embarrassment to anyone listening. She attempted to provoke her political rivals, seated around the committee table, and all in all, seemed to enjoy the turn events were taking. In Regev’s world, she is the state. She will determine, she will decide and she will mold Israeli culture in the image of her own worldview. The girl from the periphery town of Kiryat Gat will show all the great actors like Gila Almagor and all the great authors like Amos Oz what Jewish culture really is. This Knesset meeting and her current status brought out a whole new level of arrogance in her. She is proving herself to be utterly oblivious, power-hungry, toxic and just plain mean. Unfortunately, members of her party attending the discussion didn’t bother to put a stop to the horror show. While she intended her performance to serve her political interests, it actually sowed seeds of destruction across Israeli society.

Ever since she was appointed minister of culture in May 2015, Regev has adopted a cynical approach, intended to improve her standing in the next Likud primaries. She attacks Ashkenazis (Israelis of European origin) and leftists whenever she can, regardless of how much damage she leaves in her wake. It is no coincidence that the far-right group Im Tirtzu has embraced her warmly over the past few days. It is also worth recalling that in 2013, the Supreme Court ruled that Im Tirtzu’s guiding principles were reminiscent of fascism. Just a few hours after Regev’s dangerous funding law was announced, Im Tirtzu launched a campaign listing Israeli artists and cultural figures, whom it considers “foreign agents.” The timing of the two events was no coincidence. According to Im Tirtzu, Regev was a political target of these artists and the left solely because she is promoting a law that encourages loyalty to the state.

Among the many artists named as “plants” and “foreign agents” are actresses Gila Almagor and Rivka Michaeli, playwright Yehoshua Sobol, and authors Amos Oz and David Grossman (Grossman lost a son in the 2006 Lebanon War). The current campaign is the direct continuation of the “Moles in Human Rights Groups” campaign, launched by Im Tirtzu about a month ago. While the first campaign portrayed Israeli human rights activists in groups like B’Tselem or Breaking the Silence as representing the interests of foreign governments, cultural figures who expressed support for those groups are now being targeted.

Comments about the campaign by Im Tirtzu Chairman Matan Peleg underscored the link between that new publicity campaign and Regev. “Whenever elected officials in Israel attempt to fulfill the task given to them by the people in the most democratic and legitimate way possible, we encounter an automatic campaign of character assassination by ‘people of culture,’ who are really just attempting to portray themselves as enlightened, progressive and ‘better informed’ than the rest of the public. One time it is Amos Oz; another time it is Gila Almagor or David Grossman. Standing proudly at the forefront of the current round of attacks against the minister of culture is Joshua Sobol. The problem is that these people leave out the fact that they are members in organizations infiltrated by foreign agents, and which are funded by foreign governments and the New Israel Fund [nongovernmental organization] to undermine the State of Israel.”

What Peleg effectively did in these interviews is expose the hidden link between the organization he heads and Regev. If we were to use his own terminology, Regev is actually an Im Tirtzu mole, operating in the Ministry of Culture and the Israeli government. Could it be that this is the real threat to Israeli society?

“I can’t help but remember the history of all sorts of countries in Europe, and how it all began as a slow trickle,” Rivka Michaeli told Army Radio on Jan. 28. Michaeli is one of Israel’s most prominent actresses, and also one of its most admired stars. To show how easy it is to disprove the claims that Im Tirtzu has made against her, Michaeli went on to note various milestones in her own life and in the lives of her immediate family. One of her brothers served as the Israel Defense Force's chief medical officer; her father was a member of the pre-state Etzel Underground (Irgun) and a personal aide to prominent right-wing and revisionist ideologue Ze’ev Jabotinsky; her younger brother served in the Tank Corps’ commando unit; and her best friend was the songwriter Naomi Shemer, who was closely identified with the right.

Very few condemnations against the Im Tirzu campaign were uttered by politicians who are not part of the Israeli political center-left. The few on the right who did condemn it included Knesset member Benny Begin of the Likud (son of former Prime Minister Menachem Begin), who said, “The search for and identification and marking of alleged traitors is an old fascist characteristic, an ugly and dangerous one.” The chairman of HaBayit HaYehudi, Minister of Education Naftali Bennett, wrote on his Twitter account that the campaign was “embarrassing, unnecessary and disgraceful.” It was only after Regev realized that Bennett had joined the criticism against the campaign against the "mole artists" that she reacted in a similar vein, tweeting that hurting any person because of his or her political opinions is wrong.

While Bennett deserves to be congratulated for his condemnation, he has played an important role in the current government’s assault on the liberal and democratic values of Israeli society. Over the past few days it has been reported that he acted deviously and surreptitiously to plant a far-right narrative in the Ministry of Education’s own civics textbooks, and that he is trying to brainwash Israeli children. An editor, Yehuda Ya'ari, who worked on the book for the ministry and later disclosed the kinds of distortions that were introduced into it, also became the target of an incitement campaign. He is now being portrayed by the ministry as an enemy of the state.

Just like Regev, Bennett is acting like a “mole,” representing a certain segment of society with fascist tendencies. It can only be hoped that enough bold and powerful forces in this government will stand up and take the necessary steps to rein in their subversive efforts.