Israeli singer Noa isn't deterred by the criticism of Israeli right-wingers and decisions by localities to boycott her as she continues her support of the two-state solution. 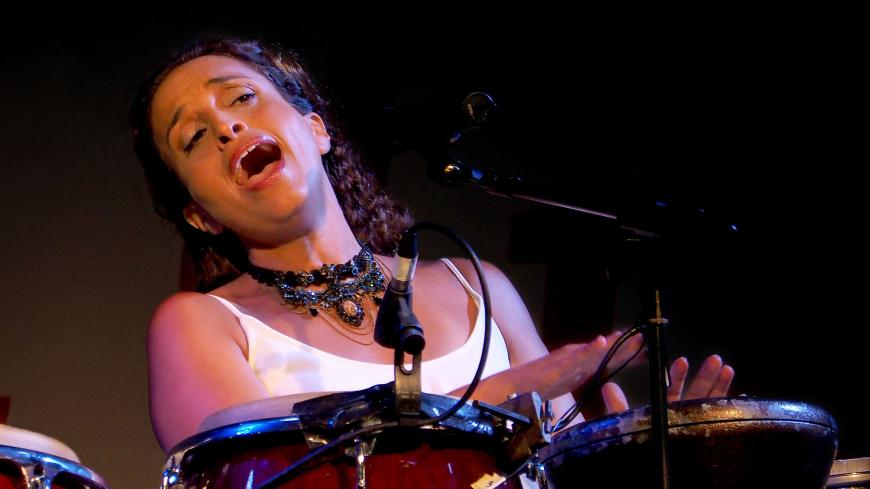 Singer Achinoam Nini (known as Noa outside Israel) and her talented musical partner Gil Dor, both veteran peace activists, were on a tour of Australia this week. Rabbi Gersh Lazarow of Temple Beth Israel, which hosted them in Melbourne, bravely pushed back against right-wing activists who demanded a boycott of the two leftists. According to the rabbi, “only” two Jewish communities in Melbourne removed their sponsorship of Noa’s tour in the wake of the controversy. Some of the wealthy members of the community withdrew their support. Not all. The musical-political event that took place in Sydney, sponsored by the New Israel Fund, was sold out. The hall has 250 seats.

But then came the phone call from Israel with the message that the city of Lod canceled Noa’s planned performance at the “bringing Lod residents together” event next month, “in light of due sensitivity, the mayor prefers to avoid unnecessary tensions and emotions that could cause damage and result in the opposite reaction of pulling apart population groups in Lod.” Lod joined a growing list of Israeli and Jewish communities that have rejected an Israeli artist who is known around the world. Cancellations are usually said to be due to “technical reasons” or “security reasons.”

Millions of copies of Noa’s more than 12 albums have been sold around the world. She has performed for the pope, at the White House and at the economic forum at Davos; she was appointed goodwill ambassador on behalf of Israel to the Food and Agriculture Organization of the United Nations; she holds a knighthood from the government of Italy. But the Israeli right will not forgive her for her refusal to share a prize from the Society of Authors, Composers and Music Publishers in Israel with singer Ariel Zilber at the beginning of 2014. The reason for Noa's decision was that Zilber expressed understanding for the motives of Yigal Amir, the man who assassinated Prime Minister Yitzhak Rabin. Two years later, she resigned from the Israeli Union of Performing Artists in protest of its decision to bestow Zilber a prize for lifetime achievement. In a Facebook post, Noa explained that she can’t be a member of an organization that gives a prize to a singer who disseminates hatred of Arabs and leftists, and who has not backed down from its support for the racist Rabbi Meir Kahane and mass killer Baruch Goldstein.

“I’m in good company,” Noa answered with a smile a question posed by an audience member at the Sydney appearance. “The president of Israel — Reuven Rivlin, a Likud man — is also considered a traitor by the same people, because of his refusal to pardon soldier Elor Azariah, who shot a wounded terrorist to death.” An hour earlier, in a conversation with Al-Monitor, Noa said with an undisguised tone of sadness that she has paid a heavy economic price for her decision to use her musical talent in the fight for a just peace. She reached her decision after Rabin’s assassination in 1995 at the end of the peace rally where she appeared alongside other Israeli artists. She doesn't perform in settlements, but she hasn’t given up on a dialogue with those settlers who are willing to host her in their homes — “I differentiate between entertaining and talking.”

Noa doesn’t hide her very negative opinion of the policies of Prime Minister Benjamin Netanyahu’s government. She wonders how Jews could prohibit by law Israel’s Palestinian citizens from marking the Nakba — the “catastrophe” of 1948 when the State of Israel was established. “The State of Israel had to be established, but it is supposed to be strong and generous enough to allow its citizens — who paid a heavy price — to express their pain. Australia was created at the expense of its native people, and its citizens won’t leave and return to their countries of origin. But here there’s an ability to express regret and give the aborigines due respect,” she said. With almost the same zeal she speaks of her great love for the country and tells of her family who made the long journey from Yemen to Jerusalem. Noa gives a long answer to an audience member who asked if the time hasn’t come to give up on the two states for two peoples solution in favor of one state for them both, saying in part, “Israelis and Palestinians have the right to self-determination, just as the Australians do."

The rules of her fight in no way include support of the Boycott, Divestment and Sanctions movement — “How can I boycott my country myself?” — If Roger Waters and Brian Eno had heard what Noa said to the Australian audience, which included a Muslim parliament member, they would have booed. They could have flung at her the same arrows of critique they threw at singer Nick Cave, who appeared in Tel Aviv on Nov. 19-20. “Nick, with all due respect, your music is irrelevant to this issue,” Waters wrote. “So is mine, so is Brian Eno’s, so is Beethoven’s. This isn't about music — it's about human rights."

Noa would have answered that instead of boycotting Israel because of its violation of human rights, she has chosen to dedicate the best of her time, talent and reputation to advance human rights in Israel. She would have told him that in Israel there are more peace and human rights organizations per capita than anywhere else in the world. She would have called on the two of them to join her and her colleagues among the directors of the New Israel Fund, whose support sustains dozens of organizations fighting for the rights of women and LGBTQ Israelis, and work to advance the Arab community in Israel. She would have suggested that these famous singers use their exposure around the world to tear down walls between adherents of all religions.

Noa finds consolation with Israeli diplomats who have recognized the extent of the contributions of artists like her. The sponsorship of the New Israel Fund — an organization called by Yair Netanyahu, the prime minister’s son, “a fund to destroy Israel” — hasn’t prevented the Israeli embassies in Australia and Canada from supporting her. They know that Noa — as an Israeli — presents the dark side of the policy of occupation and the settlement enterprise, but no less so, she presents a great love of Israel and the light that flows from the peace and democracy camp among the Jewish people, which refuses to burn out.