Palestinians learn the power of a picture

Images and videos of the situation in the West Bank and Gaza Strip shot by locals are empowering the Palestinians in their resistance to the Israeli occupation. 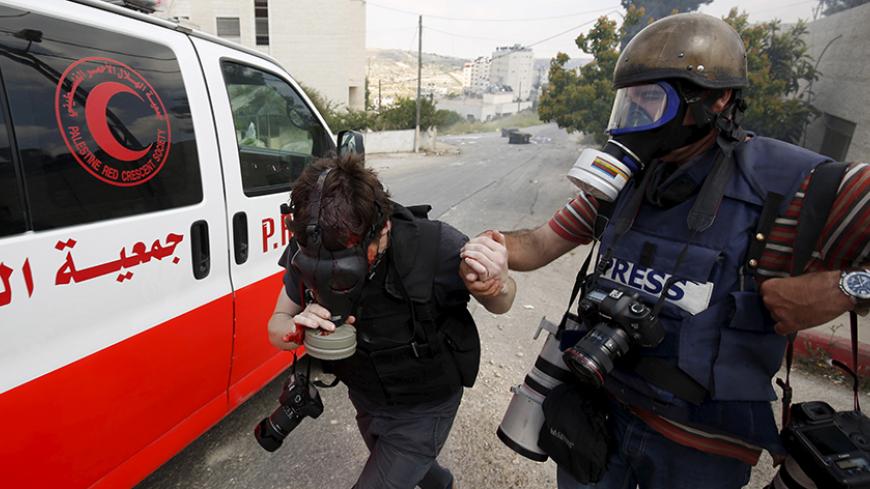 A photojournalist is evacuated after he was wounded during clashes between Israeli troops and Palestinian protesters following a rally near Israel's Ofer Prison near the West Bank city of Ramallah, May 15, 2015. - REUTERS/Mohamad Torokman

Photos, posters, videos and a variety of imagery have been part of the Palestinian struggle since 1948. The United Nations Relief and Works Agency for Palestine Refugees in the Near East possesses possibly the largest and most impressive photo and video archives of Palestinian refugees. These photos have been taken by professional photographers from different backgrounds.

Images were also created by artists such as Ismail Shammout, whose painting “Where to?” — of a grandfather being asked this question by his grandchildren — captured the sense of Palestinian loss as a result of the 1948 Nakba (Catastrophe) of the expulsion from Palestine.

After the 1967 occupation and the rise of the Palestinian guerrilla movement, it was the Karameh (Pride) battle in which Palestinians (and the Jordanian army) stood up to the invading Israelis in March 1968, which was the focus of that era’s image. The resistance to the Israelis inspired a poster by Fatah, which became a major source of pride, fundraising and recruitment.

The popular Palestinian intifada in 1987, followed by Al-Aqsa intifada in 2000 and the current habbeh have produced iconic video images and marked a progress of Palestinians taking the lead role in the creation of their own image.

In 1988, Moshe Alpert, an Israeli cameraman who worked for CBS News, captured four Israeli soldiers following the directives of their Defense Minister Yitzhak Rabin to break the bones of Palestinian stone throwers.

Talal Abu Rahmeh, who was working for the French TF2 station in the Gaza Strip, captured the most powerful image of the second intifada. He captured by video in the fall of 2000 the shooting death of Muhammad al-Durrah whose father was unable to protect him. The recording went viral around the world and has produced scores of attempts to discredit it.

Abu Rahmeh told Al-Monitor that his French employer has posted on YouTube the entire raw video rushes he filmed to put an end to the attempts to discredit him claiming that the scene he filmed was staged.

Abu Rahmeh said that the video images of Durrah were popular as they captured human emotion. “It moved the world and whoever saw it, because it reflected a real human emotion of a father unable to protect his young son,” he said.

Tayseer Masharqa, a media professor at Petra University in Jordan, said that videos and photos have always played a role in the Palestinian resistance. “Photos and videos are the weapon of a population that is facing injustice and oppression,” he told Al-Monitor.

He added, “Journalists become eyewitnesses and their captured photos or videos become damning documents used in the struggle to defend a population against an oppressive occupier."

Palestinians, whether professional or citizen journalists, were able to film and post their photos and images almost instantaneously with the help of easy-to-upload tools on smartphones, with the increasing use of social media.

Hossam Ezzedine, the West Bank reporter for Agence France-Presse, believes that the multiplicity of photographers has weakened the effectiveness of their work. “In 1988, a cameraman captured a scene that has represented an era. Now hundreds of professional photographers and citizen journalists are clicking away, but their effects are much less.”

Ezzedine recalls an incident where Israeli soldiers dressed as Palestinians captured a stone thrower on Oct. 7, and shot him in the leg after subduing him at point blank. The scene was filmed and broadcast by local and international media outlets, but it had little effect. “In a region where hundreds are being killed and injured and made homeless, it is hard to take the one photo or video that reflects a historic moment,” he said.

Ziad Abu Hlial, an older Palestinian man from Hebron, became a media-made local hero after he courageously confronted Israeli soldiers in Hebron on Oct. 12 with his bare hands trying to protect Palestinian youth. Tens of Palestinian cameramen captured the moment, which went viral on social media. The popular AJ+ website reported on the incident, which has so far received close to 4.5 million views on Facebook.

Mohammad Jaradat, one of the Palestinian cameramen at the scene, told Al-Monitor what happened. “When Abu Hlial confronted the Israeli soldiers, they didn’t know what to do with him because he was unarmed and the media was filming,” he said.

The images of an unarmed elderly Palestinian man confronting the armed Israeli soldiers were immediately sent by Jaradat to his employer in Ramallah, Wattan TV, which broadcast and posted them on the Wattan.tv website. It quickly went viral.

“What moved people was the courage of Abu Hlial and the fact that he succeeded in protecting the youth from the armed Israeli soldiers,” Jaradat said.

A Palestinian-captured and broadcast video had finally allowed Palestinians to be masters of their own image.

Muntaser Hamdan, a member of the Palestinian Journalists Union, told Al-Monitor that Palestinian journalists are able to show high-level professionalism and are attractive to local, regional and international broadcasters.

“As international agencies are unable to afford sending cameramen to different locations, they tend to depend more and more on freelancers who cost them much less than foreigners,” Hamdan said.

However, Walid Batrawi, the West Bank project director with BBC Action, told Al-Monitor he is worried that any citizen is now able to film and broadcast images. “As everyone is competing to be the first to post the videos, this entails critical ethical and professional dangers,” Batrawi said.

Whether it is paintings, posters, photos or videos, or the more recent Visualizing Palestine infographics depicting restrictions against Palestinians, images have become an important part of the Palestinian narrative. Palestinians’ ability to control and frame the narrative is best expressed by the images the world sees of them.

No longer do Palestinians want to seek world sympathy for their plight as refugees. They prefer, instead, to show the image of a resolute unarmed man who is confronting the heavily armed Israeli occupier. The sense of pride from such images gives a hopeless population a badly needed glimmer of hope for a future of independence and freedom.