Renowned Gaza artist Fathi Ghaben has suffered from poverty and feels cheated, but still believes he will be rewarded for his work someday. 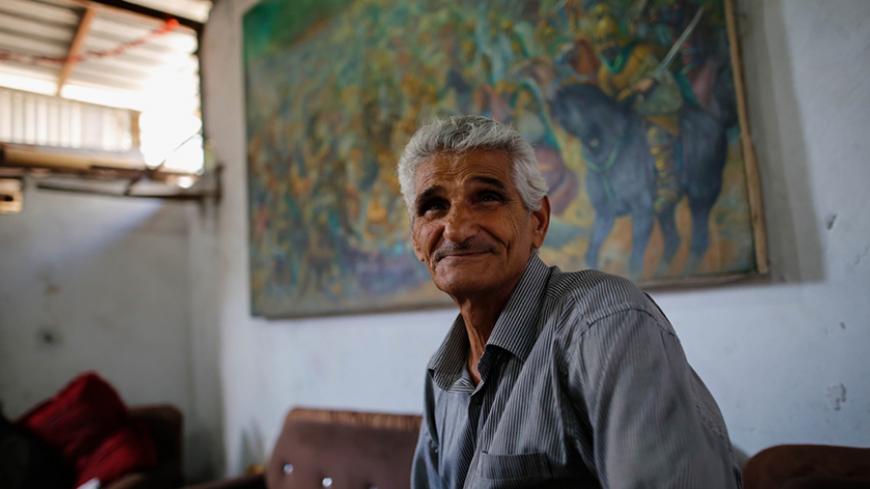 Palestinian painter Fathi Ghaben sits in his house with his famous Battle of Ain Jalut painting in the background in this photo taken July 11, 2015. - Motaz Alaaraj

Al-Monitor recently visited Ghaben’s residence in the al-Nasr neighborhood, where poverty was evident in his house: its asbestos ceiling, the stones of its unpainted walls and broken furniture. Yet, in contrast to other poor houses, it offered an air of abundance through the artistic and financial value of the paintings hanging on the gloomy walls.

Ghaben is aware of his paintings’ value, some of which sell for as much as $250,000 outside the Gaza Strip. Yet he sees none of the money. He told Al-Monitor, “Some of those who bought my paintings at a low price in Gaza sold them for thousands of dollars abroad. I cannot travel to claim my rights, and a large part of the profit has gone to the Palestine Liberation Organization’s cultural institutions."

Ghaben confirmed that a publishing company he preferred not to name had capitalized on some of his paintings in the 1980s and printed them on thousands of posters that were sold abroad. The company’s owner received all the profits while Ghaben did not receive a penny, he said.

“I am now thinking of resorting to the judiciary to claim my rights,” he said. However, that seems unlikely to happen, and he has mixed feelings of despair and enthusiasm. Ghaben, 69, seems frustrated and does not see anything to gain in going after his rights.

He added, “I use money from the budget dedicated to the household expenses to buy canvas and paint tubes. I spend my retirement salary to pay bills and obligations.”

Ghaben, who has four children, is a former Palestinian Authority employee.

His paintings feature a multitude of elements and figures. Colors and drawings are used to convey hallmarks of Palestinian life such as embroidery, the return key, the Palestinian headscarf and an olive branch. The paintings also contain symbols that some consider key to the Palestinian visual arts schools, such as a woman in Palestinian peasant dress, the alleys of Jerusalem, harvest images, olive trees, resistance images and life in the Palestinian camps.

It has been two months since Ghaben has painted. He lacks both canvas and motivation. His wife Faiza said, “When the children’s demands and life requirements increase, he stops painting; he puts color and canvas aside and starts worrying. He will not admit it, to preserve his dignity.”

On the water-damaged wall behind us hangs Ghaben's Battle of Ain Jalut painting, which is famous among locals. He said, “I will keep it until there is a buyer who is aware of its artistic value.”

Seven of Ghaben’s works were hung in the Palestinian Red Crescent Society’s theater until the building burned down when Israel bombed it during the 2008-09 war. One of his paintings is now exhibited at the Gaza Ministry of Culture.

Ghaben enrolled in Gaza's Al-Azhar University in the 1960s, but he was unable to finish there due to his family’s poor financial situation. He educated himself by reading the magazines he sold and trained himself to draw, and grew famous among the locals in Gaza City.

He explained to Al-Monitor that he discovered his talent when he was 5 years old. He used to paint everything around him.

“I used to draw everything and at all times, whether during math, science or Arabic-language classes," he said. "Although I have not completed my studies because I was poor, I was hired as a painting teacher because I am well-known.”

He told Al-Monitor that in the 1970s, his paintings focused on nature scenes while he trained himself. “I painted dozens of nature paintings for commercial reasons — to sell them in Israel, where the labor market started to be open to workers from the West Bank and Gaza.”

Early in the 1980s, his paintings became associated with the escalated confrontation with the Israeli occupation and the emergence of national identity. He said, “In 1982, I drew the painting that is known as 'Identity.' It represents a group of people protesting at the Damascus Gate in Jerusalem, and in it I anticipated the first intifada. It was printed in colored ink on posters that were distributed in the West Bank and the Gaza Strip.”

Ghaben said he was arrested on charges of incitement by the Israeli occupation in 1984 because of this painting.

He is convinced that the quest for wealth and money contradicts the essence of art and creativity. He said he has rejected many offers to leave Palestine and live abroad and to dedicate his time to art. "It is probably the perfect offer, and I may be just naive. Yet I have a clear conscience, and most importantly I feel the people’s suffering and pain and have not left them alone,” he added.

Ghaben said his paintings are exhibited in religious and cultural centers in France, Germany and Japan, such as the Tokyo Union Church building. Many exhibitions have been held in Europe in his honor, although he was unable to attend them, he said.

Rarely does anyone check on him these days. He said, “When I look back and see the person I have become, I feel a sense of injustice and anger at every person and institution that took advantage of my talent, then neglected it and abandoned me.”

Though he feels forgotten by his people, the gifted painter was honored June 6 by Palestinian President Mahmoud Abbas at the presidential headquarters in Ramallah. Abbas awarded Ghaben the Medal for Culture, Science and Arts, purchased several paintings and promised to improve his living conditions.

Ghaben said, “It took this event too long to happen. When I saw the president, I told him that I've been patient for too long and I’ve spent my life waiting.”

When he was a year old, Ghaben left Hirbiya village with his parents after the Israeli army occupied it and other Palestinian villages in 1948. He suffered from poverty during his childhood as a refugee and during his adulthood with his children. He has always relied on his talent. He said, “My despair, circumstances, lack of education and toughness of life are part of my talent. Art has always been an escape from pain.”