The 28th anniversary of the Palestinian Declaration of Independence came and went without fanfare. 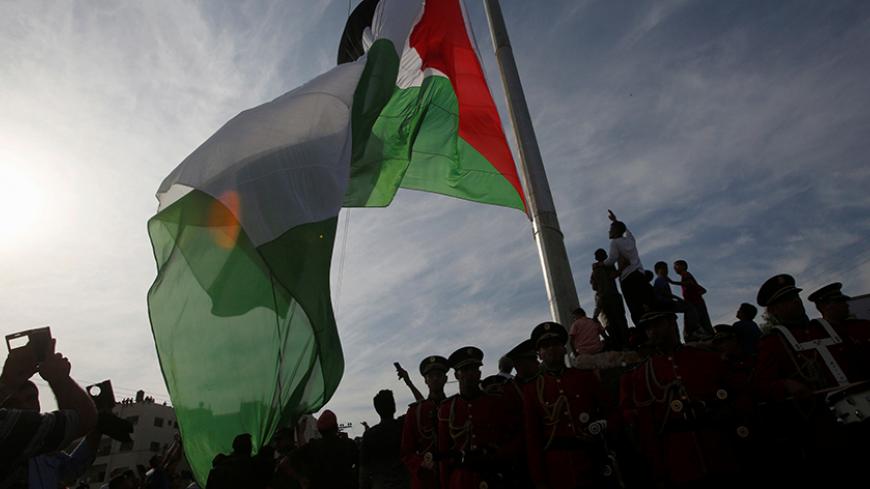 People watch the raising of a Palestinian flag during a rally marking the Palestinian Declaration of Independence in 1988, in the West Bank city of Tulkarm, Nov. 14, 2016. - REUTERS/Abed Omar Qusini

The date Nov. 15, 1988, is a special one for Palestinians. On that day, the Palestinian National Council (PNC), the Palestinians' parliament in exile, convened in the Algerian capital of Algiers and adopted the Palestinian Declaration of Independence. It was almost one year into the relatively nonviolent intifada that shook up Israel and the world.

PLO Executive Committee member Hanan Ashrawi told Al-Monitor how the declaration had been largely drafted by distinguished professor Edward Said and Palestinian poet laureate Mahmoud Darwish, both now deceased. “Said, who along with [prominent academic] Ibrahim Abu-Lughod was in contact with the Americans, contributed to it,” said Ashrawi. “He wanted the declaration to contain a number of principles that appear in the US Constitution, but it was Darwish who drafted the final text that was read in Arabic.”

The idea of the declaration reflected the aspirations of local leaders of the intifada, including Faisal Husseini of Jerusalem. Ashrawi believes the document should not have been called a declaration. “It should have been announced as a body of principles that would define the nature of our state and the basis of our future constitution,” she said. “It was a courageous and astute statement that succeeded in gaining the support of all Palestinians.”

Ashrawi, who served as spokesperson for the Palestinian delegation to the 1991 Madrid peace conference, said that the declaration represented major Palestinian concessions. She explained, “It included Palestinian acceptance of the UN partition plan of 1947, but unfortunately it was not reciprocated with similar seriousness by Israel and the world, which continued to move the goal posts and make further demands of Palestinians.”

PNC meetings usually take place in supportive Arab capitals, so in Algiers in 1988, Yasser Arafat, the longtime leader of the Palestinian movement, took the podium and read the Palestinian Declaration of Independence to a roaring PNC audience: “The Palestine National Council announces, in the name of God, in the name of the people, of the Arab Palestinian people, the establishment of the state of Palestine in our Palestinian nation, with holy Jerusalem as its capital.”

The declaration reflected international law, advocated values of respect and tolerance and included indirect recognition of Israel. The PLO was considered a terrorist organization at the time, and its leaders were often targets of Israeli assassination attempts.

Palestinians in the Pine Palace in Algiers celebrated back then, as balloons bearing the colors of the Palestinian flag came down, and excitement was in the air when in Jerusalem, at Al-Aqsa Mosque, the declaration was read aloud, giving it relevance on the ground. In the occupied territories, the scene was electric, with Palestinians celebrating while the Israeli army tried to quell their excitement and enthusiasm.

Ilan Ziv, an American filmmaker of Israeli origin, recalled the scene for Al-Monitor, saying, “I was in Bethlehem, and a curfew had been declared that evening throughout the occupied territories. There was so much excitement. Homemade fireworks were shot, and people were screaming from the rooftops and celebrating even though the Israeli army was nervously patrolling the streets. Then, at the moment that Arafat was supposed to make the declaration, the electricity went out, and the entire city was pitch black, as the Israeli army tried to prevent Palestinians from following the declaration on TV. But the electricity cut-off only raised the level of the celebrations.”

Twenty-eight years later, without the actualization of independence, the scene in Palestine is somber. Hassan Breijieh, the head of the Committee to Resist the Apartheid Wall in Bethlehem, lamented to Al-Monitor, “The declaration is a statement that was supposed to be built on. It reflected a vision that required implementation through a viable strategy.”

According to Breijieh, what is needed now, before one can talk about concrete steps to implement the Declaration of Independence, is national unity. “All factions and patriots must be united with a clear purpose and goal,” he said. “Nothing will be done without unity. All the factions must meet and agree on a unified vision and work together to implement it.”

Kayed Miari, the founder of the Nablus-based Witness Center for Citizen’s Rights and Social Development, told Al-Monitor that the declaration has lost its appeal, because the public has no faith in moral victories. “The value of independence has been gutted because of the continuation of the Israeli occupation and the absence of real sovereignty, with the Palestinian government playing nothing more than a functional role,” he said.

In the Gaza Strip, Hamadeh Hammodeh, the director of Al-Fajr Center, which trains released prisoners in media skills, bitterly told Al-Monitor, “We got nothing out of this declaration on the ground. No state, no [return of] refugees, no borders and no rights achieved. The only thing we get on this day is a holiday from school and work.” Gazans cannot celebrate this day because, Hammodeh said, “[They] live in a terrible situation with the siege and the restrictions on all sides.”

In Ramallah, satirical columnist Walid Batrawi scoffed at the declaration. In a post on Facebook, Batrawi joked, “The world has April Fools,' while Palestinians have this November declaration.”

In Hebron, Haitham Sharif, a local journalist, said that the only celebration for the declaration had been formal events. “People were mourning Arafat, who died 12 years ago, rather than celebrating the Declaration of Independence,” he said.

Mubarak Awad, the founder of the Palestinian Center for the Study of Nonviolence in Jerusalem, and who was deported from his birthplace by Israel in June 1988 on the eve of the Palestinian intifada, told Al-Monitor, “When the declaration was made, Palestinians were in the midst of a collective intifada in which everyone was willing to make a sacrifice for the nation. Today, we have lost that collective will as everyone is looking out for themselves after our unity has been shattered.”

Awad, who now runs Nonviolence International out of Washington, and teaches nonviolence at the American University in the US capital, called for genuine change if the declaration is ever going to be implemented. “We lack a leadership that can excite its people,” he said. “We have no strategy for liberation, and we are accepting division rather than rejecting it.”

While many Palestinians in the diaspora commemorated the 28th anniversary of the Declaration of Independence, the celebrations in the occupied territories were not even newsworthy. The reality is that Palestinians in daily confrontation with Israel are no longer convinced by words and declarations. So long as the reality on the ground has not changed, and the occupation continues, there will not be any genuine celebration.

For Palestinians, the question is no longer one of a state or a flag or a president. An independent state is about true sovereignty on the ground and freedom to move without restrictions. It will be hard to celebrate a public declaration while the illegal, Jewish settlement enterprise remains ongoing, and the Israeli military occupiers rule over Palestinians.