The successful protests against an income tax hike in Jordan are a source of both inspiration and worry for Palestinians, who depend on the stability of their friend and neighbor. 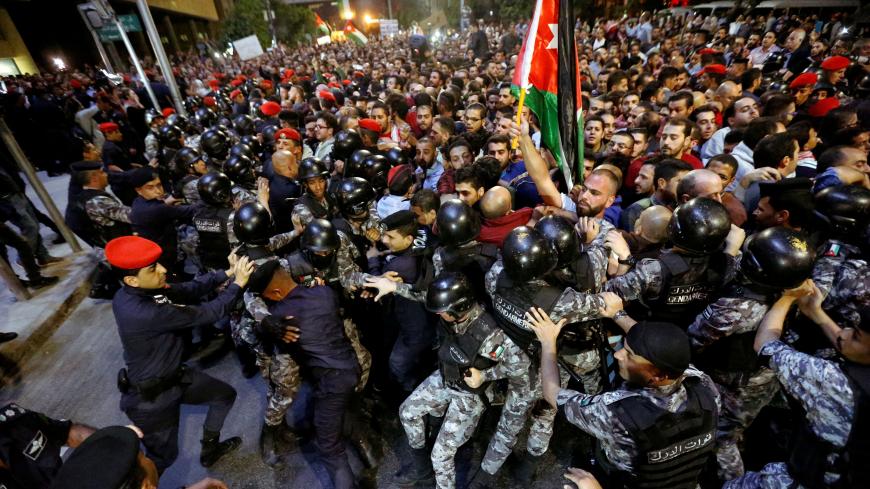 The weeklong protests in Jordan against an income tax bill have captured the attention of many around the world because of its organizers’ discipline and civilized approach to the Jordanian police. Palestinians of all walks of life expressed their support and admiration of the success of Jordanian youths who stopped a fuel price hike, brought down a prime minister and influenced the king to appoint a new prime minister who is favorable to their demands.

But amid the support and admiration expressed over social media and in private talks, there has also been concern over the effects of the protests on the Jordanian state.

Kayed Miari, the founder of the Nablus-based Witness Center for Citizen's Rights and Social Development, told Al-Monitor that while the young Jordanians made important gains in such a short time, not everyone is celebrating. “While many are overwhelmed with what they have seen by following the protests on television, many are also genuinely worried about how these protests will end and how they will affect the stability of Jordan.”

Nahed Abo Tueima, a lecturer in gender studies at Birzeit University, told A-Monitor that the bigger worry is a revisit of the Arab Spring. “What no one wants is another disastrous Arab Spring in our neighboring Jordan. We are worried about the safety and security of Jordan and we don’t want them to experience what Syria, Libya and Egypt have experienced.”

Sliman Mansour, a Palestinian artist famous for his iconic painting of a porter carrying Jerusalem on his head, told Al-Monitor that no one in Palestine wants to see any harm to Jordan. “Things are bad in Palestine, especially in Gaza, and people don’t want to see our neighbors in Jordan having to go through economic problems.”

A major concern for Palestinians following the protests in Jordan has been the relationship between the protests and the “ultimate deal” Washington is planning to declare as an answer to the Palestinian-Israeli conflict.

Naser Laham, the editor-in-chief of the independent news agency Maan, wrote June 7 that the United States, Israel and some Gulf states contributed to the crisis in Jordan. “They know how powerful Jordan is for Palestinians and they helped create this crisis to influence Palestinian decision-making, especially in terms of Jerusalem.”

Laham pointed out, “You can’t talk about this crisis without recognizing the importance of Jordan’s steadfast position in rejecting the anticipated US plan and its rejection of the US Embassy move to Jerusalem.” King Abdullah II and the Jordanian government have consistently and publicly opposed the US move.

Concern over the protests in Jordan has led to calls for greater coordination and mutual support between the Palestinian leadership and Jordan. Palestinian lawyer Ali Abu Hableh commented in an op-ed on the popular Gaza-based Donia al-Watan news site June 4 that the events in Jordan require the highest level of meetings and coordination between Jordan and Palestine. “In order to challenge the existing coalitions and to defeat the 'ultimate deal,' it is important to help support Jordan, which is the eastern gateway to Arab security and the entry point for Palestinian liberation.”

Palestinian President Mahmoud Abbas initiated a phone call to Abdullah June 5 expressing support to Jordan. “The two exchanged information about the latest developments regarding the Palestinian situation within the context of high coordination between the two leaders,” according to the royal website.

The Fatah movement also chimed in June 6, expressing support for Jordan’s king and people “who have always been supportive of the Palestinian people and have led the defense of Jerusalem’s holy sites with valor.”

Osama Qawasmi, a Fatah spokesman and a member of its Revolutionary Council, stated, “Palestine and Jordan are Siamese twins that can’t be separated and therefore whatever happens in Jordan is felt in Palestine.” Qawasmi said that Jordan’s “security and stability is of the highest national interest for Palestinians.”

Jordan is the main connection between the West Bank and the rest of the world. It is also home to over 2 million Palestinian refugees, who play a major role in Jordan’s business and public life. Palestinians in the West Bank, which was part of Jordan until 1988, have strong ties to the Hashemite Kingdom and take comfort in its strong and stable government.

Their friend and neighbor's potential loss of this stability worries Palestinians. That the Amman-based demonstrators are of a socio-economic background similar to that of many Palestinians is a source of even stronger affinity. They are rooting for the success of both the Jordanian protesters and their government.