Jordan’s decision to recall its ambassador to Israel seems to have produced impressive results in getting two Jordanian detainees back home. 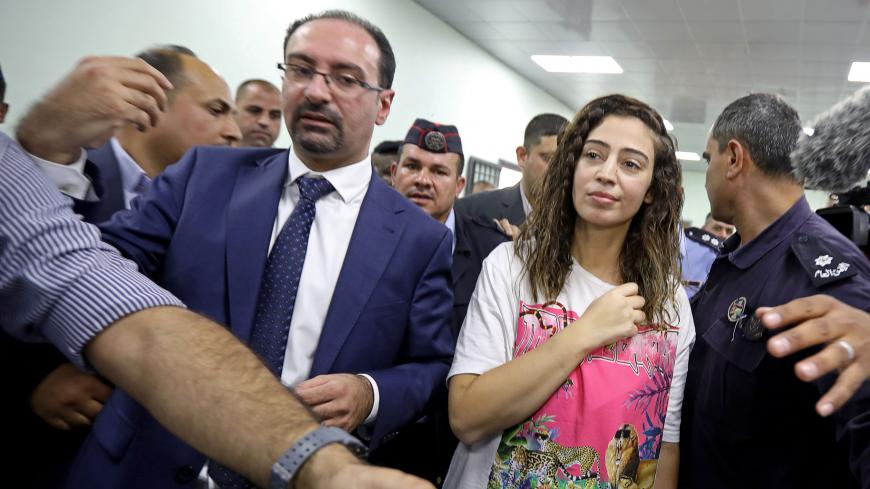 Jordanian citizen Hiba Labadi is seen upon her release from Israeli custody, at the King Hussein Bridge crossing near Amman, Jordan, Nov. 6, 2019.

When Israeli intelligence officers were unable to produce any evidence of terror connections for two Jordanian citizens arrested upon trying to visit their relatives in the West Bank, they did what has become routine.

Hiba Labadi and Abdel Rahman Miri were detained Aug. 20 and Sept. 2, respectively, and later placed under administrative detention. Based on the 1945 British Defense Emergency Regulations, administrative detention is routinely used on Palestinians, with over 413 being held without charge or trial as of August, according to official Israeli reports.

Israeli officials have called their government’s ties with Jordan “a cornerstone of regional stability.” The diplomatic row that climaxed Oct. 27 with the recalling of ambassador Ghassan Majali forced the Israelis to reconsider the continued detention of the Jordanians, one of whom — Labadi — was on a month-long hunger strike.

Jordan’s Foreign Minister Ayman Safadi, who has been playing a prominent role in seeking the return of the detainees, broke the good news on Twitter, saying Nov. 4 that the two would be back home before the end of the week.

The two Jordanian detainees were freed and returned to Jordan Nov. 7 to a sea of family and government well-wishers who met them at the King Hussein Bridge.

Laith Nasrawin, a Jordanian constitutional lawyer and law professor at Jordan University, told Al-Monitor why the recall of the ambassador was so effective. “Not only does it hint at a potential break in diplomatic relations, it also focuses on the Israeli human rights situation, as the two Jordanians were not accused or charged with any offense but merely held administratively.”

Adnan Abu Odeh, a former adviser to King Hussein and King Abdullah, told Al-Monitor, “The government played it right. Recalling an ambassador for consultation is a very minimal diplomatic tool for a sovereign country to let the other side know of its displeasure.”

Ahmad Deek, director general at the Palestinian Foreign Ministry, told Al-Monitor that the recall was an effective means to pressure the Israelis, saying, “It was the best of quiet but effective diplomacy and will be credited to Jordan and the king as successful use of diplomacy to bring about the return of Jordanian citizens.”

But many observers ask if the recall necessary and why it was used in this case and not in response to other serious Israeli violations.

Ofer Zalzberg, a senior consultant with the International Crisis Group, wondered in an interview with Al-Monitor why Jordan used this mechanism for the two detainees but not for other issues like Prime Minister Benjamin Netanyahu’s pledge to annex the Jordan Valley or Jewish prayer at Al-Aqsa Mosque. “The recall of the Jordanian ambassador over the two detainees makes Jordan appear to be acting based on public opinion, rather than the leadership's professional understanding of the country's interests. More broadly, the crisis suggests that Israeli-Jordanian security coordination — so far mostly shielded from the deterioration in the relations between the countries — has an upper ceiling determined by Jordanian public opinion.”

Nazareth-based lawyer Botrus Mansour told Al-Monitor that Israel only responds to such strong tactics. “They only understand and react to this kind of language,” he said.

Abu Odeh believes that Jordan’s choice of tactic was measured and appropriate. “They used this mechanism on a winning case. Had they tried to use it for the Jordan Valley or Jerusalem, it might have not been as successful,” he told Al-Monitor.

Mahdi Abdul Hadi, founder-director of the PASSIA think tank in Jerusalem, told Al-Monitor that the recall of the ambassador should be seen as a minor step in a long game. “The security file is a long, drawn-out one with many headlines that have existed even before the Wadi Araba peace treaty. This should be viewed as a hotly fought football game in which the referee raised the yellow card at the right time against one of the players. Had the other team not responded to the recall of the ambassador, a red card would have been drawn and a player would have been expelled from the game.”

Ironically, two other issues appear to be in play but were not directly mentioned by either side. One was the approaching Nov. 12 date on which Israel will finalize the return of two plots of sovereign Jordanian land. Some feared that the Israelis would use the arrested Jordanians as a bargaining chip to delay the return, and that is why Jordan upped the ante by recalling the ambassador. Isabel Kershner, The New York Times' longtime Israeli reporter, wrote a story Oct. 30 about the detention, including the ambassador's recall and the fact that Jordan is not budging on the need for the return of the two tracts of land.

Another curious story was the unauthorized entry on Oct. 29 of an Israeli citizen into Jordanian territory and his arrest by Jordanian officials. Jordan didn’t return the Israeli immediately, as has often been the case, but held him and has been questioning him. Jordanian members of parliament have called on the government to exchange him for all 22 Jordanians held in Israeli jails, especially Labadi and Miri.

While the release and return of the two Jordanians will lower the political temperature between Jordan and Israel, it clearly signals that the peace agreement — now in its 25th year — is nowhere close to what its signatories, King Hussein and Yitzhak Rabin, had wished for it.