Jordan is perhaps Fatah’s most strategic geographic partner, and thus it was a no-brainer that Fatah accepted the request by Jordan not to have any Jordanian Palestinian delegates attend the seventh Fatah congress. 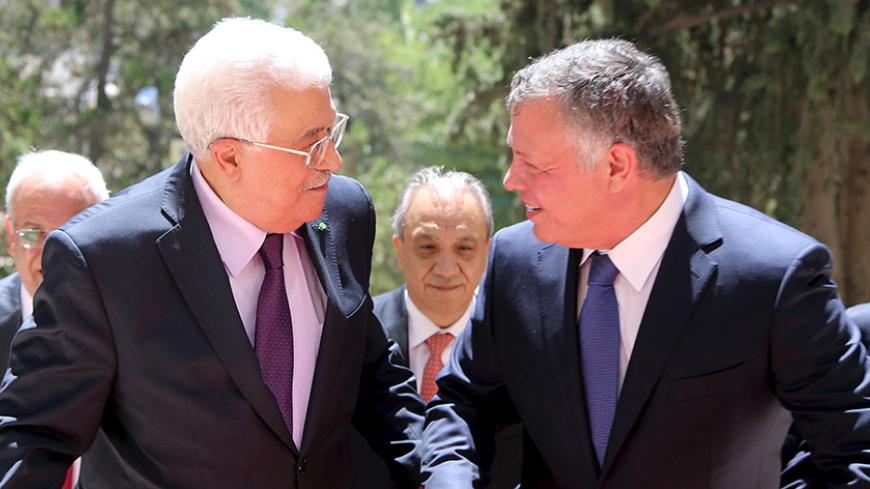 The Nov. 24 report in the Gaza-based Donia al-Watan website caught some by surprise. It stated that Jordan’s 26 delegates to Fatah’s seventh congress due to open Nov. 29 are no longer attending the congress due to “technical, logistical and security reasons.” The exclusive report stated that the Fatah leadership reassigned the seats to Syrian and Lebanese delegates to the congress.

Najeeb Qadoumi, who was to lead the Jordanian-Palestinian delegation to the congress, confirmed the report to Al-Monitor. “It was a request by the Jordanian government, and the Palestinian leadership accepted it,” he said. Qadoumi noted the strategic importance of Jordan, saying, “The Jordanian government has been a staunch supporter of Palestine and especially in their position protecting the holy places in Jerusalem.”

Omar Kallab, a Jordanian Palestinian political activist from Gaza, told Al-Monitor that the decision follows rising tensions between Ramallah and Amman. “The last years have seen a cooling of relations for a variety of reasons. … The controversy over the FIFA [presidency] vote for Prince Ali bin al-Hussein of Jordan [Jordan claimed the head of the Palestinian Football Association did not vote for Prince Ali] and the disagreement over the installation of cameras in Al-Aqsa Mosque were some of the problems that have caused this tension,” he explained.

Kallab said that Palestinian rejection of a recent push by the Arab Quartet (Jordan, the UAE, Egypt and Saudi Arabia) was the final blow in the relations. “The Palestinian delegates were unable to answer in the affirmative when asked if they can guarantee that the results of the Fatah congress would be to the liking of the Quartet,” he said.

Multiple Arab media outlets have reported that the Arab Quartet is pressuring Fatah to accept the return of dismissed Fatah leader Mohammed Dahlan. Qadoumi said that Dahlan and his supporters were given a chance to have his dismissal reversed, but he failed to make an official request. “Four of his supporters appealed the decision and are now attending the congress, but Dahlan didn’t make an official appeal,” Qadoumi added.

In the internal discussion between Jordan and the Palestinians, the issue of divided loyalty was brought up. According to Hani al-Masri, a leading independent Palestinian strategist, the issue of citizenship was used in the discussion to persuade the delegates to stay away from the conference in Ramallah. “Delegates to the Fatah congress were told that they risk losing their citizenship in Jordan if they chose to attend the congress,” Masri said in a column published Nov. 22 in the Lebanese daily As-Safir.

The London-based online newspaper Rai Alyoum also reported on the issue saying that the Jordanian citizenship status of some top 22 Palestinian officials is now under review. Two Arabic letters denoting “being considered for withdrawal” have been attached to the records of prominent Palestinian leaders such as Mahmoud Abbas, Azzam al-Ahmad and Abu Alaa Qurei, the paper reported Nov. 11. Three days later, Ahmad, a Fatah Central Committee member, questioned the validity of the report telling the UK-based Arabi21.com website that the Palestinians who are Jordanian citizens have not been informed of any change in their status.

Since Jordan has refused to allow Hamas to operate out of Jordan and had deported Hamas leaders in 2008, Kallab believes that Jordan will not allow Fatah to work in Jordan, especially if they are rejecting the advice of Jordan and the Arab Quartet.

Abbas Zaki, a leading Fatah leader who is responsible for inter-Arab relations, vehemently denied any tensions with Jordan. Speaking by phone on the evening of the start of the Fatah congress, Zaki told Al-Monitor that relations with Jordan are “great.”

Majed Faraj, the head of the Palestinian intelligence service and a close confidant to Abbas, seemed to allude to some of the pressures that Fatah was under. “Fatah is not for sale or division and must be protected by blood. It is a trust of martyrs and prisoners. We need to protect the history and build for the future,” he said on Nov. 27 in an impromptu speech at the Grand Park Hotel in Ramallah, where delegates from Gaza and from abroad were staying.

Jordanian officials refused to comment directly on the upcoming congress. Government spokesman Mohammad Al Momani indicated to Al-Monitor that the congress is a Palestinian affair and Jordan had nothing to do with it.

Jordan, which is home to more than 2 million Jordanians of Palestinian origins, is Palestine’s neighbor and strategic partner. Palestinian officials regularly call Jordan Palestine’s lungs, as it is the source of air and freedom to the people under occupation. Travel in and out of the Palestinian areas is restricted to the Jordan River Crossing at King Hussein Bridge. Jordan has been a major advocate internationally of Palestinian rights, namely as the lead defender of Al-Aqsa Mosque as well as other Muslim and Christian holy places in Jerusalem.

While Fatah leaders want to preserve their independence as they hold their seventh congress, they are extremely careful not to negatively affect their strategic relations with nearby Jordan, which both sides believe will weather the current storm. The current tensions notwithstanding, it is highly likely that if the congress is a success, some of the current tensions might disappear. Jordan and other countries are more likely to rally behind the new leadership that will emerge out of Ramallah if it appears that it has strong support from the Palestinians.