The extent of Arab and international support for Fatah and Mahmoud Abbas was on display at the movement’s seventh congress. 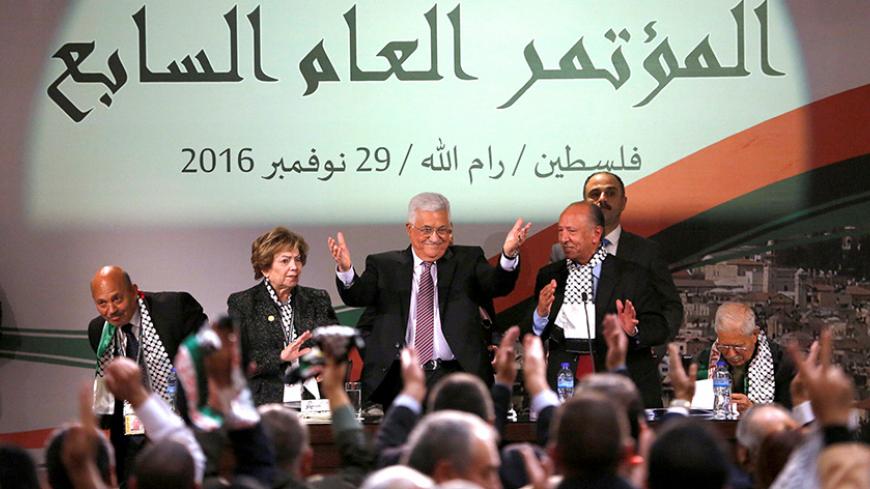 At times, it has seemed as if Palestinian President Mahmoud Abbas were trying single-handedly to fend off pressure from friend and foe to reinstate the expelled renegade Mohammed Dahlan in Fatah's ranks or continue to postpone the movement's long-anticipated congress. If Abbas felt lonely before the congress, he didn’t feel at all isolated after it convened Nov. 29, also the International Day of Solidarity with the Palestinian People. Abbas, who was scheduled to give a speech on the opening day, decided midway through the evening to postpone it so the 60 delegates from 28 countries could show the world how much support he and Fatah have.

In a video posted to YouTube by the Fatah Youth Movement on the eve of the congress, Mahmoud Alloul, a Fatah Central Committee member and a movement co-founder, had presented background to Fatah and Abbas' pre-congress troubles and pressures. “We were not [previously] allowed to hold this congress,” he said. “The pressures came from friend and foe.” Alloul then explained that the key issue for Fatah since its establishment in 1960 has been its independence. “We paid a high price over the years for the independence of our decision-making process, but this has safeguarded us as we refuse all attempts to impose ideas on us.”

Among the pressures and ideas being imposed on Abbas, in addition to the primary one of certain Arab states pushing Dahlan's reinstatement, was for him to appoint a deputy and hence a successor. An Israel TV Channel 2 report claimed that the Arab Quartet — Egypt, Jordan, Saudi Arabia and the United Arab Emirates (UAE) — had been pressing to have Nasser al-Kidwa, the former representative of the PLO to the United Nations and nephew of the late leader Yasser Arafat, appointed Abbas' deputy.

One of the reasons why the seventh congress was held three years later than scheduled — it is supposed to convene every four years — has been Fatah leaders' concern that it would lead to a split in the movement. Dahlan, dismissed in 2011, appeared to have gained enough support in the occupied territories and within the Arab Quartet to threaten Abbas, challenging his legitimacy within his own movement.

The pressure from the Arab Quartet presented financial and existential pressures. While funds from Saudi Arabia and the UAE are crucial for the survival of the Palestinian state under occupation, Jordan and Egypt, which border it, are like lungs, providing badly needed fresh air to the embattled Palestinians under occupation.

Jordan and Egypt both had strong popular and official representation at the congress, and they were among the first to speak. Former Egyptian Foreign Minister Mohammed Orabi spoke passionately in support of Abbas and Palestine, while Amjad Majali, a former member of the Jordanian parliament, reiterated the shared sacrifices that Jordanians and Palestinians have suffered in the defense of Palestinian rights. Ambassadors to Palestine from Jordan and Egypt, which have signed peace treaties with Israel, were also at the congress. Other speakers passionate in their support of Abbas and Fatah included representatives from Algeria, Kuwait, Morocco, Sudan and Tunisia.

Speakers from international bodies included Luis Ayala, the head of the Socialist International, a representative of the UN secretary-general, representatives of the Chinese Communist Party in addition to various other delegates from the Americas, Asia and Africa. A representative of Turkey conveyed words of support from Turkish President Recep Tayyip Erdogan and Prime Minister Binali Yildirim.

The following day, Erdogan called Abbas to congratulate him on convening the congress despite the pressures on him. Hamas political bureau chief Khaled Meshaal sent a supportive message to the congress, read aloud by Palestinian parliamentarian Ahmad Haj, in which he expressed his commitment to cooperating with Fatah.

Hamadeh Faraneh, a former member of the Jordanian parliament and a member of the Palestinian National Council, told Al-Monitor, “The speeches and those represented at the congress provided Abbas with strong protection to continue insisting on the need to keep Palestinian decision-making independent.”

In turn, Abbas alluded to the pressures in his speech, delivered Nov. 30. “We don’t interfere in the internal affairs of the Arab countries, and we will not allow anyone to interfere in our affairs,” he said.

The strong Arab and international presence in Ramallah was a testament to the resilience of the Palestinian liberation movement and the support it has around the world. Abbas may have gambled in convening a congress without the full support of Palestine’s closest neighbors and partners, among them Jordan, Egypt and the UAE, but his gamble to insist on independence appears to have made Fatah unique in its 51 years of struggle for the Palestinians' right to self-determination.

With the backing on display at the congress, Fatah has been able to end the hemorrhage in terms of losing supporters to the Dahlan secessionist effort. The tables have turned, and Dahlan has been stopped, so some of his supporters will no doubt attempt to return to the Fatah fold.

The wound might not be healed overnight, but it appears that Abbas and his movement will survive. Abbas has shown that his stubbornness in insisting on the independence of Palestinian decision-making can pay off at home and abroad.