Fatah congress to usher in new generation of Palestinian leaders

The seventh Fatah congress, to be held Nov. 29 in Ramallah, is expected to bring a younger face to the Palestinian leadership. 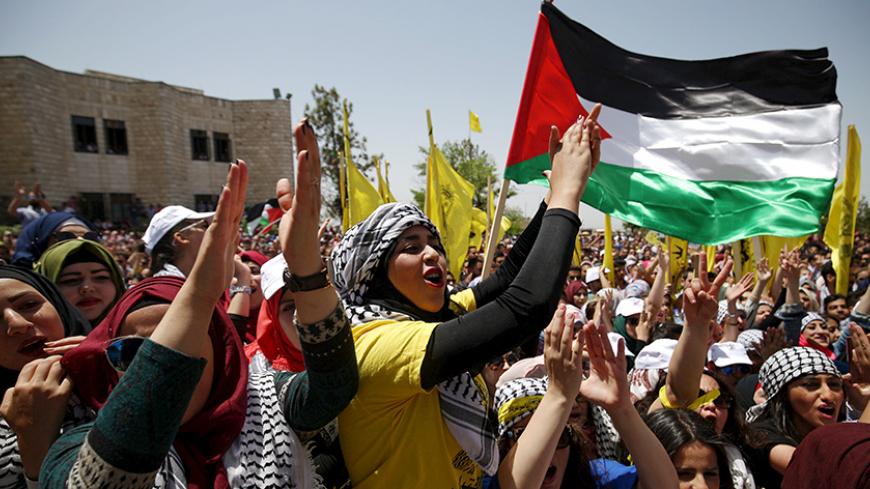 The 1,500-plus delegates of the seventh Fatah congress, the next generation of Palestinian leaders, will be relatively younger (in their 40s and 50s) and more representative of the occupied territories than the current leadership. The congress, to be held Nov. 29 in Ramallah, will agree on a political platform and an action plan for the Palestinian struggle and elect the new members of the movement’s Revolutionary Council and the Central Committee. Currently, the 22 members of Fatah’s Central Committee and 100 members of the Revolutionary Council are older and represent leaders who returned to Palestine after the 1993 Oslo Accord such as Mahmoud Abbas, Abu Maher Ghneim, Abbas Zaki and Mahmoud al-Aloul.

Notably, the sixth congress was held in Bethlehem in 2009 after a 20-year lull in meetings.

Congressional delegates vote using secret ballots. The once secretive liberation movement published the names of its delegates to the Nov. 29 congress, giving the world a glimpse at the next crop of Fatah leaders. The most prominent feature of the list was its exclusion of renegade Fatah leader Mohammed Dahlan and his supporters.

A quantitative look at the delegates shows that about 1,100 of the 1,500 voters, or 73%, come from the West Bank (including East Jerusalem) and the Gaza Strip. Less than 400 delegates reside outside Palestine. Furthermore, 167, or 11%, of delegates are women, and 33, or 2%, are Christian. One delegate, Uri Davis, an Israeli Jew, was elected to the Revolutionary Council during the sixth congress in 2009.

The delegates also include 151 current or former members of the military (50 are retired), 44 members of Palestinian diplomatic missions and 66 prisoners who will vote via proxies (50 are from the West Bank).

Nearly 312, or 21%, of the delegates (200 from the West Bank and 112 from Gaza) were elected by their communities over the past two years and represent the youngest group of delegates (late 20s and early 30s).

Ziad Khalil Abu Zayyad, a young international media spokesman for Fatah, told Al-Monitor that the membership distribution was done fairly according to the internal laws of Fatah. "Representatives of the youth, the different cities of the West Bank and Gaza, the popular resistance and civil society organizations were all included," he said.

Abu Zayyad said delegates will handle a full political agenda. "The congress will discuss Palestinian relations with Israel, the role of the youth in the movement, relations with some Arab countries, the assignment of a deputy for [Abbas] within Fatah and the evaluation of the popular resistance and what can be done to empower it," he said.

Al-Monitor spoke to a number of first-time delegates who expressed excitement about the potential change in the Palestinian liberation movement, which launched its first attack against Israel back in January 1965.

Jawad Thawbteh, from the village of Beit Fajjar, was 28 when he was elected in the 2014 Fatah primaries. He was the youngest delegate from his area. Speaking to Al-Monitor by phone, Thawbteh said that he and other delegates are committed to making changes in the bylaws of the movement to revitalize it.

“We need to change some provisions of our movement’s bylaws that don’t encourage the young to join," he said. "At present, you need to have been a member of Fatah 15 years before you qualify to be elected to the 100-member Revolutionary Council.”

According to the Fatah hierarchy, the Revolutionary Council acts as a sort of legislative arm of the movement, while the 20-plus Central Committee acts as its executive branch. Thawbteh said that he will advocate for the movement to adopt a clear strategy of nonviolent resistance. “I will do my best to push for a resolution committing to the use of popular struggle that is in line with international law,” he said.

Tahseen al-Astal, 44, from Gaza, was chosen as a representative of professional unions. The deputy head of the Palestinian journalists union told Al-Monitor that he is opposed to transforming Fatah into a party. “Our liberation struggle is far from over," he said. "The West Bank and Gaza are still under occupation, and we need to keep the issue of ending the occupation as our central theme.”

Fadi Abu Baker, from Nablus, is a PLO employee born into a family of Fatah leaders. He told Al-Monitor that the seventh congress must find the right balance between young and old, and between those from the occupied territories and those from outside. “We must not forget our fellow revolutionaries outside of Palestine and some of the leaders who are older and wiser,” he said.

Baker said that he was unhappy that leaders from Lebanon, Jordan and Tunisia form a minority in the seventh congress, after having constituted a majority since the beginning of the movement. He reflected on the congress' political manifesto, saying, “I hope that after discussion, we can find a formula that can work. The idea of smart popular resistance must be defined and we should not totally abandon the armed struggle, even though at present it is not a viable option.”

The convening of the seventh Fatah congress at Abbas’ headquarters in Ramallah could possibly mark the last time he and the movement's fellow founding fathers wield power in a movement that is becoming younger and more reliant on new leaders from the occupied territories.

Abbas has shown strength and resilience in putting together a congress that few felt would take place without Dahlan and his supporters. Publicly announcing the names of the delegates is a small victory for Abbas — an indication that the movement’s strongest asset continues to be its ability to stay independent of pressure from regional and international players. The successful convening and conclusion of the congress will provide Abbas with an honorable platform to exit the political scene and put in place a generation of younger, more pragmatic and more energetic Palestinian leaders.