A series of internal conflicts in Fatah has been deepened by a decision to withhold the salaries of Gaza-based security officers said to be supporters of Mohammed Dahlan, President Mahmoud Abbas' chief rival. 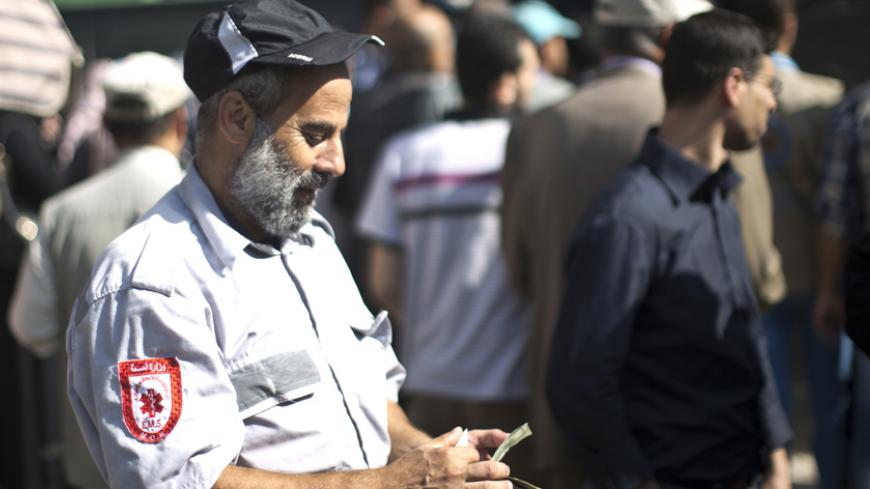 Palestinian President Mahmoud Abbas was haunted last week by the Arabic saying “cutting livelihood is worse than cutting necks.” Abbas had stopped payment on the salaries of more than 200 security officers suspected of being loyal to renegade Fatah leader Mohammed Dahlan.

When the Palestinian government transferred 60% of December salaries on Jan. 20, 220 Gaza-based security officers discovered that their names were not among those submitted to the consortium of six banks responsible for distributing payrolls. The punishment for the alleged Dahlan loyalists by way of denials of payment did not go over well, leading to protests, petitions and calls for a reversal of the decision. Episodes of violence and unrest were recorded against a number of pro-Abbas officials and institutions.

The officers received a short-term payout from a financial security net fund established by pro-Dahlan supporters to offset the “no-salaries decision," according to Samir Mashrawi, a staunch Dahlan confidant. The denial of salaries to people who are essentially civil servants was harshly rebuked by many in Gaza and the West Bank, including by some of the most senior officials in Abbas’s own Fatah movement.

Tawfiq Tirawi, a senior Fatah Central Committee member and former head of intelligence, described the decision as a “mistake” and called for its reversal. Tirawi echoed many others when he told the Gaza-based Donia al-Watan website that members of Palestinian security have their “loyalty to the nation and legitimacy and not to any individual.” A petition signed by Fatah members of the elected Palestinian Legislative Council called for a reversal of the decision and for holding those responsible for it accountable.

While the discussion, petitions and protests within Fatah have mostly focused on the salary issue, the controversy is playing out in a much larger arena. The seventh Fatah congress, which had been scheduled for January, appears to have been indefinitely postponed because of the party's problems in Gaza. Nevertheless Fatah’s executive body, the Central Committee, insisted at its Jan. 28 meeting that the congress would in fact take place as “soon as possible.” Fatah secretary Amin Maqboul denied that the congress had been postponed until March, but failed to provide a date for convening the movement’s highest body.

Fatah is in a difficult position after making a binding decision to prohibit proxies at the next congress. At the sixth Fatah congress, the secretariat had allowed delegates to vote in absentia. At the same time, however, it failed to organize provincial primaries to elect new delegates. Thus before the seventh party congress, the 1,000 Fatah delegates, including 200 military personnel, must be elected by the grassroots members of the movement, but out of the eight provinces in Gaza, only two had selected delegates by the end of January.

Additional internal troubles were also escalating. The offices of the Prisoner Support Committee were ransacked and set ablaze, leading many to conclude that the incident reflected the infighting within the Fatah movement.

The failure to resolve internal problems has highlighted the struggle between Fatah's old guard and new guard. A large number of current Fatah leaders belong to the generation of late Palestinian President Yasser Arafat and President Abbas. Young Fatah leaders, themselves advancing in years, are waiting in line to be elected to leadership positions. The divide between the generations was exemplified in recent discussions about the possibility of one of Fatah's aging founders, Farouk Qadoumi, returning to Gaza to help resolve problems surrounding the delegates issue.

If Abbas is able to get past the current crisis, successfully hold Fatah elections in Gaza and convene the seventh congress, he would have weathered one of the biggest internal storms to have hit his movement. Even if he does, it is unclear whether Fatah will be able to recover sufficiently to hold on to power in future general elections.

While the Palestinian public appears to continue to give Abbas a chance to see what he can produce internationally, his own movement is not as generous. In addition to his troubles with Dahlan, Abbas needs to deal with Fatah's succession issue as well as the struggle between the old and new guards. How these issues are resolved will have a major influence on the larger Palestinian struggle.