In an interview with Al-Monitor, Abdel-Hakim Awad, a member of the Fatah Revolutionary Council who was excluded from the movement's seventh congress, talks about Palestinian President Mahmoud Abbas' political failures, his exclusionary policies and his collusion with Israel. 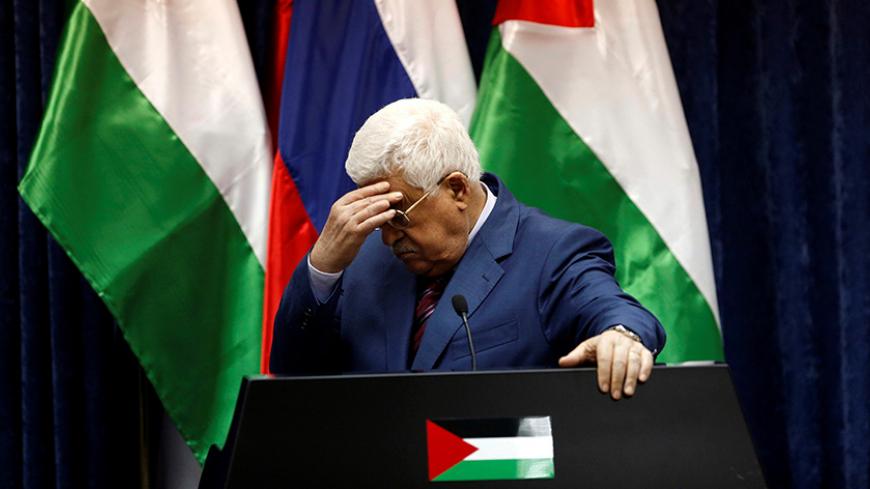 CAIRO — According to Abdel-Hakim Awad, a member of the Fatah Revolutionary Council and the Palestinian National Council, Fatah crowned President Mahmoud Abbas “king” of Fatah during its 2009 congress, but Abbas’ will and political achievements have been hijacked by a group of other leaders.

In an interview with Al-Monitor, Awad said he fears there is a hidden political agenda behind Abbas’ holding of the seventh general congress.

Al-Monitor:  When was the Fatah reformist current first established, and why?

Awad:  Some are trying to describe the dispute between Abbas and Mohammed Dahlan as personal, but I think that it was caused by an objection to Abbas' policies, which have failed to achieve the desired results for the national project and Fatah's objectives of liberating the Palestinian people from the oppression of the occupation. The dispute was also caused by Abbas’ political approach, as he limited the struggle's choices in the negotiations, which only led to failure and frustration. There is agreement on the need to bring about reform and protect Fatah and its struggle. This has been the movement’s task ever since the dispute with Abbas started over his policies, his leadership approach, his political behavior and his clinging to obsolete tools amid an internal Palestinian situation that has deteriorated further. The Palestinian division continues and there are two governments — one in Gaza and one in the West Bank —​ not to mention Abbas and Hamas’ deference to foreign influence.

As such, many leaders in the movement agreed to bring about reform within Fatah, particularly after the sixth Fatah congress that took place in 2009 in Bethlehem and after a group of those leaders felt that Abbas was drifting away from Fatah’s political and national principles and objectives. … During the congress, Abbas was crowned king of the movement and a lot of hopes were pinned on him to organize Fatah, find solutions to the problems plaguing the people, end division, restore Fatah’s stature and reform the PLO institutions. But after the congress, Abbas didn't seem to have the intentions or means to achieve these plans, and he fell under the influence of a group of leaders who started guiding him. Therefore, he became trapped in the mud of personal desires and broke away from the interests of the people. Further, the movement's constituency watched its leadership weaken as the movement was neglected and turned into a political party affiliated with those in power. Meanwhile, the Palestinian political system became totalitarian, as Abbas monopolized governance and disrupted the parliament's work, something all Palestinians dreaded would happen.

Thus the reformist current started to grow. The straw that broke the camel's back and made the current take public action was that Abbas started targeting people he labeled opponents just because they disagreed with his approach and attitudes, and he abused his powers and excluded other leaders, most notably Dahlan.

Al-Monitor:  Each body or bloc needs media outlets, and you have founded some outlets of your own. Can you tell us about them?

Awad:  A wide campaign was launched against this bloc of senior leaders who took it upon themselves to set the Fatah movement back on track and sought for more than five years to preserve and protect it from the weakness and abuses and policies that failed to further the Palestinian people and their cause. It was necessary to create the means to defend these goals and find a secure and better way to achieve these goals. And this can be done through creating diverse media outlets that serve as a platform for the leaders of this bloc and other segments of the Palestinian people, to counter the rabid and ferocious campaign led by local and international parties to demonize [the bloc] and address the false accusations made against it.

Al-Monitor:  You have been a member of the Fatah Revolutionary Council since the sixth Fatah congress. What led to your exclusion from the seventh congress?

Awad:  My exclusion was based on Abbas’ desire, his hatred-based actions toward those who disagree with his positions and his absolute monopolization. He is the president of the Palestinian Authority, head of the Fatah movement, head of the PLO’s Executive Committee and the commander in chief of the Palestinian security forces. He neglects the law and the movement's statutes that govern its institutions. He monopolizes power and is abusive toward those who disagree with him.

Al-Monitor:  Fatah’s seventh congress was held in Ramallah in December. What is your take on its exclusion of many leaders in the movement such as yourself and Dahlan?

Awad:  This was not a regular Fatah congress, but an exclusionary one that Abbas organized as he pleased in order to achieve the results he wanted and eliminate political rivals within Fatah. Chief among them is Dahlan. There could even be a political agenda behind [the congress], one aimed at controlling Fatah and changing its principles and objectives in a way that caters to the occupation and concludes a political deal with Israeli Prime Minister Benjamin Netanyahu in light of the deteriorating situation within Fatah. This is what the Fatah leaders fear. There are suspicions concerning the objectives of the congress, and the Fatah leaders and cadres have sensed the malice lying behind its objectives and the way the congress was organized. It is simply not logical to exclude from the congress members of the Fatah Legislative Council, elected members of the Revolutionary Council or prominent Fatah leaders. The congress included those who supported Abbas and excluded those who were against him, thus violating the movement’s statutes, internal regulations and Basic Law, not to mention the organizational criteria of any congress.

Al-Monitor:  The judiciary in the West Bank is affiliated with Abbas, and it recently issued a decision to lift the parliamentary immunity of five PLC members opposing Abbas. What is the message that Abbas wanted to convey through this decision?

Awad:  This is another political mistake committed by Abbas, a new crime in the history of [Palestinian] political action and a violation of the PA’s Basic Law. The immunity of PLC members should be sacred. There are measures to hold members accountable, through commissions of inquiry formed by the PLC. What Abbas did is revenge against political opponents. This PA mentality that is controlling the people and invoking hatred, grudges and revenge will never manage to end the occupation.

Al-Monitor:  How do you perceive the future of Fatah in light of these problems?

Awad:  The current started developing a plan to oust those hijacking the movement and allow the latter to meet its challenges and restore its militant standing and stature. The first step is to convene a consultative meeting involving hundreds of leaders and cadres who were excluded by Abbas in the congress to discuss ways to save the movement. There are several locations where the congress can be held, but the most likely location will be Cairo during the first half of 2017. We cannot think of any safe moves that would be certain not to negatively affect what is left of Fatah’s strength, which is dealt daily blows by a reckless leader. This meeting will not be aimed at splitting from the movement, but at holding consultations among a large group of leaders, discussing the output of the Abbas conference and then starting Fatah’s restoration.