The Palestinian Authority still celebrates Independence Day as declared by Yasser Arafat in 1988 despite there not being an independent Palestinian state. 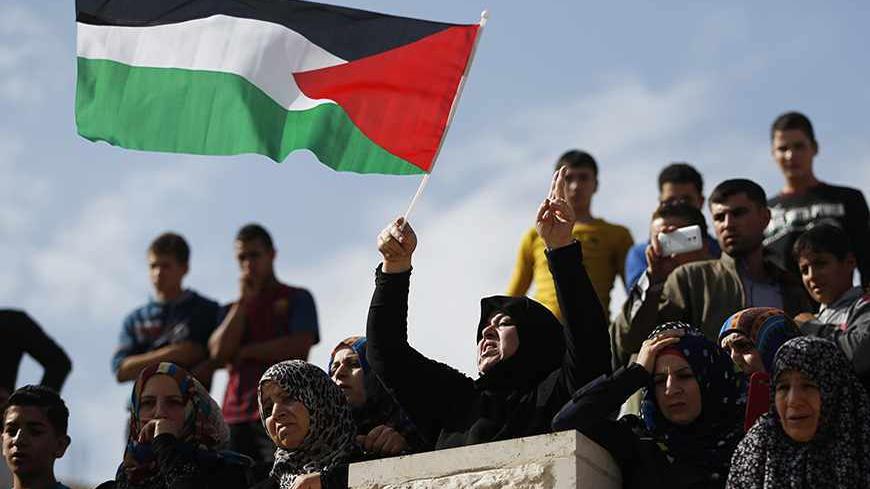 A Palestinian woman waves a flag during the funeral of Anas al-Atrash, 23, in the West Bank city of Hebron, Nov. 8, 2013. - REUTERS/Mohamad Torokman

Almost a year after the first intifada erupted on the streets of the occupied territories in December 1987, the exiled leadership of the Palestine Liberation Organization (PLO) watched in trepidation as a grassroots popular resistance movement unfolded before the world’s eyes. Demoralized on the heels of being chased out of Beirut to Tunis, the PLO found itself relegated to the sidelines as Palestinians launched general strikes, boycotts and mass demonstrations in an attempt to nonviolently “shake off” the Israeli occupation and oppression.

With all eyes on Palestine and the disproportionate violence with which Israel responded to the uprising, the PLO, pressured by the United States to reach some sort of settlement with Israel, sought to capitalize on the situation and seized the opportunity on Nov. 15, 1988,  to declare, amid much celebration and fanfare, the independence of Palestine, without actually controlling any territory in Palestine.

The perplexing Declaration of Independence was drafted by the poet Mahmoud Darwish, who had resigned from the PLO in 1993 after the signing of the Oslo Accords. As Darwish noted in a 2001 interview, “There was no clear link between the [Oslo-declared five-year] interim period [of the Palestinian Authority's rule] and the final status, and no clear commitment [by Israel] to withdraw from the occupied territories.”

The establishment of a Palestinian state, without serious input from the Palestinian public, had been bandied about a decade before 1988. Documents recently released by the Central Intelligence Agency on the Camp David Accords reveal that PLO Chairman Yasser Arafat had been interested even in 1977 in establishing a state side by side with Israel in a bid to gain recognition and acceptance from the United States. One such document, "Arafat’s Message," notes, "He is willing to make a public statement clearly implying PLO’s willingness to live in peace with Israel with both Israel and Palestine enjoying mutually acceptable and secure borders."

The 1988 declaration is full of flowery rhetoric and draws on international law to legitimize statehood amid a backdrop of various UN resolutions never actually implemented. Consider the following excerpt from the declaration:

Despite the historical injustice inflicted on the Palestinian Arab people resulting in their dispersion and depriving them of their right to self-determination following upon UN General Assembly Resolution 181 (1947), which partitioned Palestine into two states, one Arab, one Jewish, ... it is this Resolution that still provides those conditions of international legitimacy that ensure the right of the Palestinian Arab people to sovereignty and national independence.

In short, despite the UN partitioning of Palestine and allocation of the majority of the country to a largely foreign minority, without the consent of the indigenous population, the partition resolution is the justification offered by the PLO for the declaration and acceptance of a Palestinian state, incongruously based on the 1967 borders — that is, the West Bank and Gaza Strip, or 22% of historic Palestine.

The declaration, a political compromise, emphasizes the Palestinian state’s commitment to the principles of peaceful coexistence and calls on the United Nations and “peace-loving” states to help the Palestinian state achieve its goals, which are based on democratic ambitions. It does not explicitly call for an end to the Israeli occupation or for Israel to be held accountable for human rights violations. It also fails to address the paradox of declaring statehood under occupation. What is obvious is that the appeasement of Western powers and self-aggrandizement were prioritized over the needs of the Palestinian population.

Twenty-five years later, the West Bank continues to celebrate Independence Day as an official holiday. In light of the renewed, and some would argue farcical, negotiations between the PLO and Israel —with PLO Chairman and PA President Mahmoud Abbas confirming the resumption of talks after the negotiating team resigned on Nov. 13 — it is the perfect moment to assess the state of affairs this Independence Day.

The signing of the Oslo Accords by the PLO in 1993 divided the West Bank into Areas A, B and  C. More than 60% of the West Bank is under Area C, where Israel maintains full security and administrative control. The PA, created by Oslo to administer Palestinian affairs, is in charge of civil matters in Area B, with Israel responsible for security. This leaves Area A as the 17.7% of the West Bank over which the PA theoretically has full civil and security control, notwithstanding incursions by the Israeli military on the basis of security coordination and other operations and the extensive network of settler-only bypass roads and the lands seized from the construction of the separation barrier. With 18% of the West Bank Israeli-declared military zones, the matter of Palestinian statehood is acutely revealed as nothing more than Bantustan sovereignty.

Another fundamental issue regarding self-determination is the right of return for the Palestinians exiled from their villages, towns and cities. The 800,000 Palestinians made refugees during 1948-49 have, with their descendants, multiplied to 6 million over six decades. In an interview with an Israeli channel in 2012, Abbas asserted clearly in his improved English that he has no right to live in his hometown of Safad, stating that is now part of Israel. It is, in comparison, ironic to read the following from the Declaration of Independence itself:

In Palestine and on its perimeters, in exile distant and near, the Palestinian Arab people never faltered and never abandoned its conviction in its rights of return and independence. Occupation, massacres and dispersion achieved no gain in the unabated Palestinian consciousness of self- and political identity, as Palestinians went forward with their destiny, undeterred and unbowed. And from out of long years of trial in ever mounting struggle, the Palestinian political identity emerged further consolidated and confirmed.

The growing division between the PA leadership and its constituents is evident in the Palestinian population's cynical reception of the PA’s obsession with commemorating national holidays and anniversaries that are no cause for celebration in the first place. In addition, Palestinians living elsewhere, including the millions of refugees and those living in Jerusalem and Israel, are denied PA representation, as the ultimate authority remains the occupation.

Palestinian National Independence Day, an anomalous pretense, will continue to be celebrated by the PA in the West Bank despite ongoing occupation policies and the culture of impunity that Israel and the settlers continue to enjoy. The presence of more than 200 illegal, Jewish-only settlements and 98 fixed checkpoints in the West Bank; the daily arrests of Palestinian men, women and children; the modern-day dispossession of the Palestinian Bedouins in the Naqab (Negev) Desert and the Jordan Valley; the land grabs and house demolitions in east Jerusalem and the seven-year blockade of Gaza all implicate the hollowness of Arafat’s declaration of Palestinian statehood and independence.