While Israel celebrates its 70th birthday, the Palestinians mark 70 years of despair. 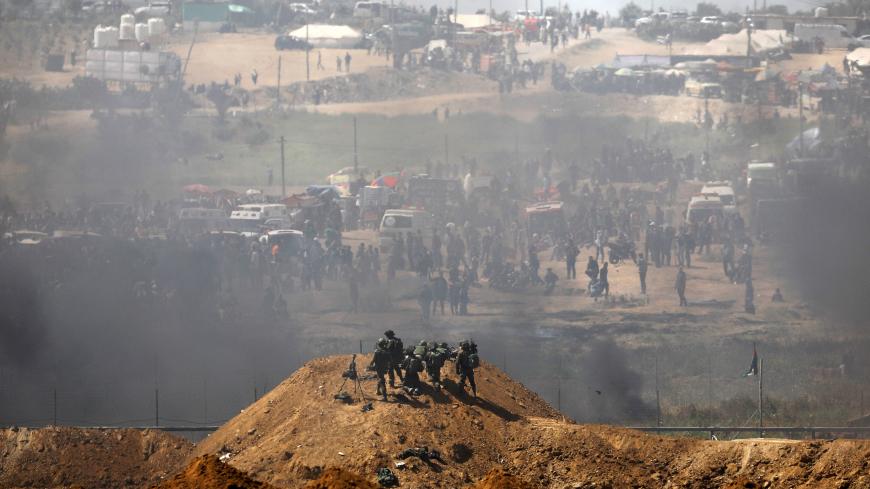 Israeli soldiers are seen next to the border fence on the Israeli side of the Israel-Gaza border as Palestinians protest on the Gaza side of the border, April 6, 2018. - REUTERS/Amir Cohen

Seventy years of Israel’s independence is cause for celebration in Israel and a reason for mourning in the Palestinian Authority.

The Palestinian mass demonstrations along the Gaza fence will come to a climax May 14, just one day before the Palestinians mark Nakba Day — the establishment of Israel that the Palestinians see as a national catastrophe. On that day, the United States is expected to move its embassy to Jerusalem; and it is on that day that West Bankers are expected to take to the streets. Terror attacks against Israel could also take place.

A senior PLO official close to President Mahmoud Abbas spoke to Al-Monitor on condition of anonymity about the importance of these days, saying, “Nakba Day always reminds us of our tragic fate, how we lost our land, the Deir Yassin massacre [in 1948, during Israel’s independence war] and above all the tragedy of our refugees dispersed around the world. From 1988 to 1993, our leader Chairman Yasser Arafat understood that the Palestinian narrative had to be rectified. That Palestinian independence at last would happen alongside Israel, and not replacing it.”

The official explained that the Oslo Accord emerged from that recognition. For the sake of statehood and peace, the Palestinians were ready to relinquish 75% of mandatory Palestine to Israel, provided they could establish an independent state on the 1967 lines with East Jerusalem as its capital. In Palestinian eyes, that was a historical compromise, recognized by then-Prime Minister Yitzhak Rabin and US President Bill Clinton. Yet since 1996, when Prime Minister Benjamin Netanyahu came to power, Israel reneged on the Oslo Accord and began to implement extensive settlement expansion and annexationist policies. The official said that Israel forces the Palestinians into a stateless existence, arguing that Israel’s legitimacy is the result of the Holocaust in Europe.

He added, “2018 and 2019 will be years of decision for the Palestinians.” The Palestinians will have to choose whether to renew the armed struggle and whether to demand equal rights in a binational state. These dilemmas are exacerbated by the pro-Israeli policies of US President Donald Trump; the situation in that respect could change in 2020 with the next US elections.

An Israeli senior Ministry of Foreign Affairs official with access to Netanyahu spoke to Al-Monitor on condition of anonymity about Israel’s historical narrative at 70 years of independence.

The official said, “The birth of Israel was not due to the Holocaust, but despite it. The birth roots are biblical and the state’s legitimacy derives also from the international community. The Arab rejection of the 1947 UN resolution [Partition Plan] and the attack on the new Jewish state are the roots of the conflict.”

He noted that Israel would not have occupied the West Bank and Gaza Strip had it not been confronted in 1967 by Egypt and Jordan. The official argued that except for Egypt and Jordan, Arab and Palestinian rejectionism continues. It is the refusal of the Palestinians to recognize the Jewish homeland that sustains the conflict. He also claimed with great self-confidence that today Israel is strong enough to protect itself against any Arab or Iranian threat, that it is an economic and technological powerhouse and the only democracy in the region. Trump has endorsed Israel’s right to be recognized by the Palestinians as the homeland of the Jewish people.

Indeed, both these narratives have clashed now for more than a century; they will never be reconciled. The Oslo process was an effort by the late Rabin, Shimon Peres and Arafat to create a new narrative of a mutual coexistence future between two states. In 1998, both parties were supposed to celebrate independence, side by side as coexisting states. That came to an end with the assassination of Rabin in 1995, and with it the end to any viable peace process.

These days, with Israel celebrating its 70th Independence Day on April 19, the problem has become more acute than ever before. The Israeli government has walked away from the readiness to share the historical land. It is dramatically expanding Israeli settlements all over the West Bank, while expanding its economic hold on it. Also, Netanyahu’s government maintains an almost hermetic closure on the Gaza Strip.

Both Israel and the Palestinians embrace the pre-Oslo narratives of mutual hate. And so, 70 years after independence, we find ourselves in clashing historical narratives, which sooner or later may again lead to violence and bloodshed. This does not leave much room to celebrate, except for the traditional ceremonies.