Palestinian Christians to get at least 7 seats in legislative elections

President Mahmoud Abbas issues a decree to allocate at least seven seats in the next Palestinian Legislative Council to Christian citizens in a move that recognizes the importance of Palestine's dwindling Christian community. 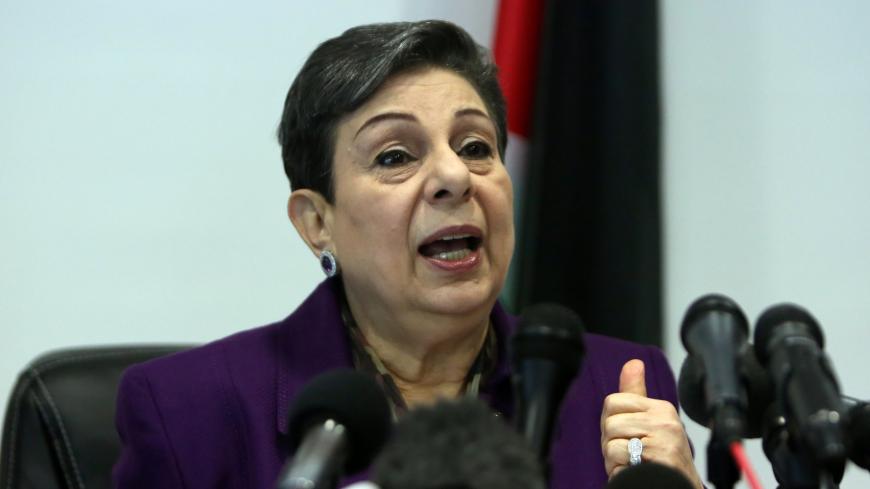 Politician Hanan Ashrawi, 74, says she will not be running for one of the seven seats reserved for Christians in the next Palestinian Legislative Council, leaving the way open for younger people. Here, she speaks at a press conference on Feb. 24, 2015, in the West Bank city of Ramallah. - ABBAS MOMANI/AFP via Getty Images)

Issa el Issa, a Palestinian Christian poet and journalist, founded with his cousin Yousef El-Issa the biweekly newspaper Filastin in 1911 in his hometown of Jaffa.

Jerusalemite George Antonius wrote the Arab Awakening in 1938 and Khalil Sakhnini (1878-1953) was the preeminent Palestinian educator of his day, producing a curriculum that continues to be used.

In the 1960s, Amin Majaj's research in the basement of the Augusta Victoria hospital involving malnourished Palestinian refugees helped show some of the benefits that Vitamin E can bring.

The leadership of the PLO founded in the late 1960s included George Habash of the Palestinian Front for the Liberation of Palestine and Nayef Hawatmeh of the left-wing Democratic Front for the Liberation of Palestine. PLO diplomats have included Naim Tarazi, Afif Safieh and Manuel Hassasian. Christian leaders were targets of assassination, including Kamel Naser, killed by Israeli forces in 1973 in Lebanon, and Naim Khader, killed in Brussels in 1981, apparently on order of Abu Nidal.

Christian Palestinians such as academic Hanan Ashrawi and nonviolence advocate Mubarak Awad left their marks during the first intifada. Artists such as Suleiman Mansour and Vera Tamari and filmmakers such as Elia Suleiman, AnnMarie Jacier, Michele Khleifi and Najwa Najjar made it to the biggest festivals and reaped international awards.

Businessmen such as Zahi Khoury, philanthropists such as Said and Suheil Khoury and others have left their mark in Palestine. The Palestinian government has seen ministers such as Bassem Khoury and Shukri Bishara. Palestinian citizens of Israel have also seen Christian leaders such as Emile Habibi, Tawfiq Toubi, Azmi Bishara and Aida Suleiman. Palestinian theologians and Christian leaders include Latin Patriarch of Jerusalem Michel Sabah, Lutheran Bishop Munib Yonan, Anglican Palestinian liberation theologist Naim Ateek and former pastor of the East Jerusalem Baptist Church Alex Awad.

In 1996, when Palestinians held their first legislative elections, Christians were guaranteed six seats out of the 88-member council, nearly 7%. In 2006, when the council size was increased to 132, the quota for Christians didn’t change, bringing the percentage down to 4.5%. Abbas’ decision to raise the quota to seven means that Palestinian Christians will make up 5% of the council. To his credit, Abbas made the seven seats a minimum allowing lists to include more Christians in safe spots if they so choose.

Ashrawi, on the other hand, said she thinks there should not be a quota for Christians. “We need a system that protects people and provides for their rights. If we don’t want our churches to become museums, our country should ensure that it allows for a vibrantly rich and inclusive pluralistic society,” she told Religious News Network.

But former Economy Minister Bassem Khoury said that without the quota, Palestinian Christians would face the danger of being underrepresented, such as is the case of the 10 million Christian Copts in Egypt. “It is hard to win unless there is a serious effort by the factions to put a Christian Palestinian in a safe spot, and therefore the quota is important and necessary,” Khoury told the news service.

For secular Palestinians and those supporting the PLO, the religious connotation is not important. The growth of political Islam and especially the effects of the rise of Hamas as a competing ideology to the secular PLO has resulted in a new way of thinking about  religion in terms of ensuring that Palestinian Christians are well represented in any and all political bodies. A former mayor of Bethlehem, Vera Baboun, told Arab News that diversity is very important in Palestine and must be reflected in leading organizations such as the Palestinian Legislative Council. “The upcoming elected council needs to reflect the widest national experience and representation of all of our society, including women and Palestinian Christians.”