The occupation at 50: No end in sight for Palestinians

The Israeli occupation of Palestinian territories will not end until world powers convince Israel that their is an economic and political price to pay for sustaining it. 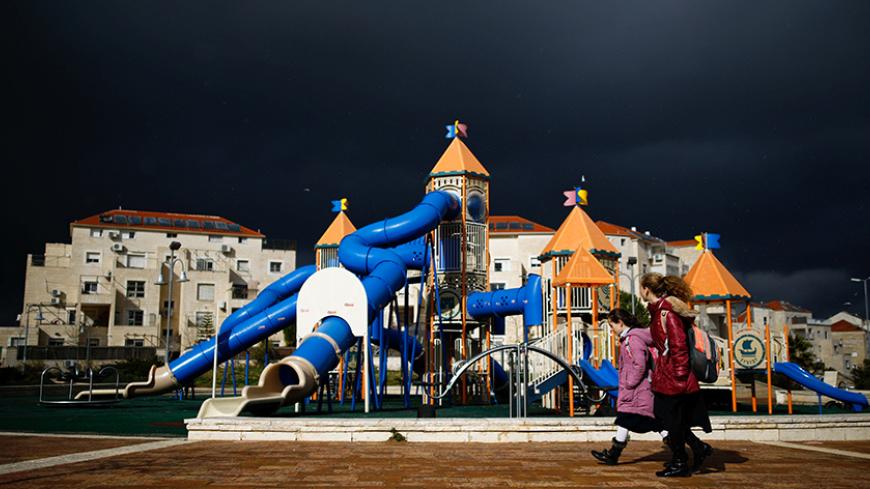 Girls walk past a playground on a stormy day in the Israeli settlement of Beitar Illit, West Bank, Feb. 15, 2017. - REUTERS/Amir Cohen

The 50 years since Israel defeated three Arab armies in the 1967 war and seized control of Palestinian, Syrian and Egyptian lands can be characterized in two words: occupation and settlements. Both are illegal, and both have been denounced by the international community, but it seems nonetheless clear that they will be around for years to come.

Rev. Naim Ateek, founder of Sabeel, an ecumenical grassroots liberation theology movement among Palestinian Christians, recently published “Naksa” (Setback), a scathing rebuke of Israel on the 50th anniversary of its occupation. The June 5 column was critical of both secular and religious Zionism, which Ateek blamed for perpetuating the occupation. Ateek linked Israel’s aggression and refusal to make peace to its lust for land.

“Israel can be likened to a bulldozer plowing through Palestine and taking it bit by bit,” Ateek wrote. “In fact, one of the main reasons for failing to arrive at a possible resolution of the conflict is that Israel has never been satisfied with what it had of Palestine and was always craving for more.”

To commemorate the 50th anniversary of the Israeli occupation of Palestinian land, the Palestinian Task Force on Public Diplomacy, an independent group with strong support from the Palestine Liberation Organization (PLO), launched #Occupationis and الاحتلال_هو#, a grassroots social media campaign on Twitter, in English and Arabic. A quick review of the comments from the campaign shines a light on the width and depth of the Israeli occupation and how it filters into every aspect of Palestinian life.

Palestinian Twitter user Elena Khoury tweeted June 4, “#occupationis going through unnecessary paperwork requirements over and over again to be able to live with your spouse/child/parents.” Another Twitter user, Mays, posted on the same day, “#Occupationis not being able to visit your relatives who live 10 minutes away and an hour away without permission from your occupiers.” PLO Executive Committee member Hanan Ashrawi inaugurated the campaign on June 3 with a video featuring stories about her daughters and the restrictions they face, experiences with which every Palestinian can identify.

Speaking to Al-Monitor via email, Noura Odeh, spokesperson for the task force, said that #Occupationis is a campaign to highlight the direct impact of Israel's occupation on all Palestinians, no matter where they live or what their circumstances are. “The 50 years of Israeli occupation are not isolated from the injustices of dispossession and denial our people have suffered over the past 100 years, starting with the Balfour Declaration,” she wrote.

Odeh said that many people have forgotten how toxic the occupation is and the extent of its brutality and injustice. “This campaign gave everyone an opportunity to shed light on the occupation through the personal experiences of people, faces, lives — not statistics. It is also shedding an important light on the strength of the Palestinian spirit and the resilience of Palestinians who continue to innovate and leave their clear imprint on human heritage in all fields despite the odds.”

While Palestinians discuss loss of their land and reflect through personal stories, leading international human rights organizations have tried to encapsulate the meaning of the 50 years that Palestinians have endured under foreign military rule. In a June 4 report, “Israel: 50 Years of Occupation Abuses,” Human Right Watch focuses on major violations of international human rights law and humanitarian law that define the occupation: “unlawful killings; forced displacement; abusive detention; the closure of the Gaza Strip and other unjustified restrictions on movement; and the development of settlements, along with the accompanying discriminatory policies that disadvantage Palestinians.”

UN Secretary-General Antonio Guterres and Zeid Ra'ad al-Hussein, head of the UN Human Rights Council, have both delivered sharp words against Israel on this occasion. Guterres stressed that 50 years of occupation have imposed a “heavy humanitarian and development burden on the Palestinian people” and “fueled recurring cycles of violence and retribution.”

Guterres asserted in a statement released June 5 that the continuation of the occupation is sending an “unmistakable message to generations of Palestinians that their dream of statehood is destined to remain just that, a dream; and to Israelis that their desire for peace, security and regional recognition remains unattainable.”

Rights council chief Hussein did not mince words either. He called for an “end to Israel’s occupation of Palestine,” as the United States mulled over withdrawing from the council. He made his comments June 6 in a speech delivered at the opening of a three-week session of the Human Rights Council in Geneva. He described the anniversary for the Palestinian people as marking a “half-century of deep suffering under an occupation imposed by military force.”

Former US presidential nominee Bernie Sanders expressed his total opposition to the occupation in a June 5 video message to the left-wing Israeli party Meretz, saying, “I know so many of you agree with me when I say, this occupation must end. Peace — real peace — means security not only for every Israeli, but for every Palestinian. It means supporting self-determination, civil rights and economic well-being for both peoples.”

Although Palestinians and world leaders have rightly denounced the occupation as the reason for the absence of peace, one of the biggest obstacles has been the illegal settlements built in the occupied Palestinian territories. The Fourth Geneva Convention bans the movement of people from the areas of an occupying power to occupied areas. This was reiterated in the June 9, 2004, advisory decision on the Israeli-built security wall by the International Court of Justice and was most recently restated in UN Security Council Resolution 2334, approved Dec. 23, 2016, with 14 yes votes and the United States abstaining.

Visitors to the occupied territories are often shocked when they see the extensive nature of the colonial settlement enterprise. At present, there are 650,000 settlers living in the occupied territories — 300,000 in East Jerusalem and 350,000 on the rest of the West Bank — in approximately 127 official settlements approved by successive Israeli governments and more than 100 “outposts,” settlements that are protected by the Israeli army but have not been legally sanctioned by the Israeli government.

Human Rights Watch notes the vast difference between the lives of Palestinians and Israeli settlers in its June 4 report: “Israel applies Israeli civil law to settlers, affording them legal protections, rights, and benefits that are not extended to Palestinians living in the same territory who are subjected to Israeli military law. Israel provides settlers with infrastructure, services, and subsidies that it denies to Palestinians, creating and sustaining a separate and unequal system of law, rules, and services.”

There are no plans to end the Israeli occupation and the corresponding illegal Jewish settlement enterprise anytime soon. Negotiations have failed and will continue to fail, largely because of the uneven balance of forces. This imbalance has been perpetuated by the pass that most world powers, especially the United States, have given Israel.

Without Israel having to pay a political and economic price for the occupation and settlements, the end to these twin evils is highly unlikely. The imbalance of power will only change when the international community becomes serious about forcing Israel to end the occupation and its settlement enterprise.