Learning the language of occupation

The terms used by Israeli politicians and settlers to describe Israeli rule of the West Bank perpetuates the occupation, brainwashes Israelis and ignores Palestinian suffering. 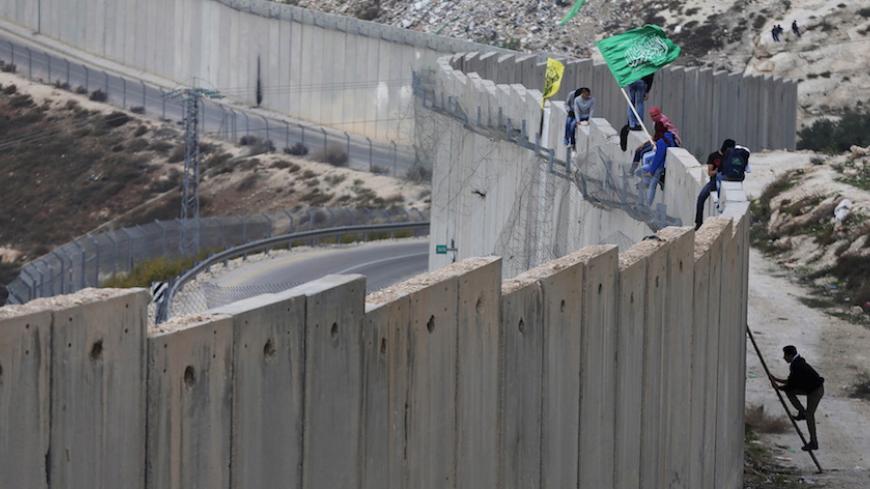 Palestinian protesters climb over a section of the Israeli barrier that separates the West Bank town of Abu Dis from Jerusalem, during an anti-Israel protest, Nov. 16, 2015. - REUTERS/Ammar Awad

June 5 marked the 50th anniversary of the start of the Six-Day War, but the State of Israel, its institutions and its citizens continue to disagree about what exactly happened in June 1967. At public rallies, Israelis on the right are celebrating the liberation of Judea and Samaria, otherwise known as the West Bank. Meanwhile, activists on the political left are gathering at numerous seminars on the occupation of Palestinian land. As for the rest — that is, most Israelis — they are staying at home. The majority were born into the “situation” or found it “ready-made” when they immigrated to Israel. They are satisfied with the information they are fed by politicians and journalists, most of whom were also born after 1967 or moved to Israel years later.

The public discourse since June 1967 helps millions of Israelis sleep peacefully with a clear conscience. The “laundered language” used — as defined by author David Grossman in a series of articles he wrote after two decades of occupation and published as a book titled “The Yellow Wind’’ — seeks to conceal the existence of millions of other people living miles from Israel’s cities, people who have not enjoyed a single day of liberty, freedom of movement or dignity in 50 years.

To mark the occupation jubilee, this column looks at the top 10 terms of “occupation speak.”

These biblical terms even roll off the tongues of left-wing Israelis. There is nothing better with which to wash away the long green stain of the Green Line, demarcating Israel’s eastern border until June 5, 1967. How many Israelis can distinguish between the “Judean Mountains,” under Israeli sovereignty, and the “Judea area,” in the southern part of the West Bank captured by Israel in 1967 and not recognized internationally as part of its territory?

Omission or blurring of the Green Line appears constantly in the official terminology of government offices and public services. For example, the Israel National Service Authority, and Clalit, the country's largest HMO, are divided into districts, one being the “Sharon (coastal zone) and Samaria” district. In the first years after the 1967 war, these areas were called “Israeli-held territories.” The nomenclature changed as the sense of ownership over these lands, in other words, the “occupation,” grew.

The website of the Foreign Ministry insists that the term “occupied territories” be replaced with “disputed territories.” It should be noted that the US-proposed road map, adopted by the government of Ariel Sharon in 2003 and attracting the support of Finance Minister Benjamin Netanyahu, held that a permanent agreement between Israelis and Palestinians would resolve their dispute and end the occupation that began in 1967. Israel presented 14 reservations to the document, not one includes the word “occupation.”

The argument that the territories captured in 1967 are not occupied, but rather “held” or “disputed,” helps validate the scourge of Jewish settlement on the other (eastern) side of the Green Line. Once this obstacle was removed, land ownership had to be registered. The extent of the land registered in the name of the state 50 years ago was quite limited — some 572,000 dunams (141,000 acres) — and almost all of it was in the Jordan Valley and Judean Desert. So, what do you do when you want to establish an Israeli settlement on other parts of the West Bank, such as the Samaria Mountains? You dust off Ottoman-era land laws and interpret them in such a way that it enables the significant expansion of land under government control.

Today, the West Bank territory designated in the Oslo Accord as Area C, under total Israeli control, includes 1.2 million dunams of state lands, 36.5% of Area C. Some 94% of these so-called state lands is under the administrative jurisdiction of Israeli settlements and their regional councils. The assertion “But these are state lands,” as opposed to private Palestinians land, has over the years become a central argument used by authorities and settlers in trying to legitimize the settlement enterprise.

No argument in private Israeli discussions or public discourse stands a chance against anything involving “security needs.” The same is true in the halls of justice. This is how a number of linguistic inventions were born that include the “special security zone,” the strip of land surrounding a settlement, entrance into which is only permitted by Israelis or Palestinian workers employed in the settlement. According to data compiled by the human rights organization B’Tselem, these strips of land, half of which are located on Palestinian territory, have expanded the areas of the settlements by 240%.

What’s more, extensive Palestinian-owned lands, especially in the Hebron Hills and Jordan Valley, have over the years been declared off limits as Israel Defense Forces “live-fire drill zones.” As a result, thousands of Palestinians have been expelled from their lands and some from their homes. Meanwhile, no one disturbs the Israeli settlers who enter these areas with their grazing herds or grape vines to plant.

Declaring an area a “closed military zone” has become routine for the soldiers serving in the territories, in fact serving the settlers. Whenever human rights activists travel to the territories to protect Palestinians, especially Bedouin sheepherders, from the settlers and to record violent incidents, Israeli soldiers whip out a “closed military zone” order and kick them out.

The use of the term “unauthorized outposts” makes Israelis believe that there is a difference between a “settlement,” allegedly an authorized, legal entity, versus an outpost, an entity allegedly established legally but without official permission from Israeli authorities. This is how the government can claim that it does not build new settlements and at the same time turn a blind eye to the establishment of new outposts and offer them funding. The anti-settlement Peace Now organization has documented 99 outposts, most of them on private Palestinian land. International law and the international community do not distinguish between settlements and outposts. As far as they are concerned, neither is legal.

Although “security fence” is the official term, security considerations were not the main concern of this structure's planners or the current government. Eighty-five percent of the fence's route goes through West Bank territory, in particular next to settlements and industrial parks. Even though the route was drawn and determined unilaterally, Israeli politicians have put it into the heads of Israelis that the areas to the west of the fence will remain in Israeli hands in any future arrangement with the Palestinians. Therefore, these areas constitute part of the “settlement blocs” where additional homes and enterprises can (allegedly) legitimately be built.

Israel prides itself on being both Jewish and democratic, but more Arabs than Jews live between the Jordan River and the Mediterranean Sea — in other words, in the areas under complete Israeli control (inside the Green Line, the West Bank, the Golan Heights and East Jerusalem) or partial control (the Gaza Strip). According to the CIA World Factbook, last July the population between the Jordan and the Mediterranean numbered 6,510,894 Arabs and 6,114,546 Jews.

What about democracy? Well, the facts and data presented in this abridged occupation lexicon have had nothing and will never have anything whatsoever to do with democracy.