Israel's policies toward east Jerusalem Palestinians are another form of "divide and conquer," writes Geoffrey Aronson. 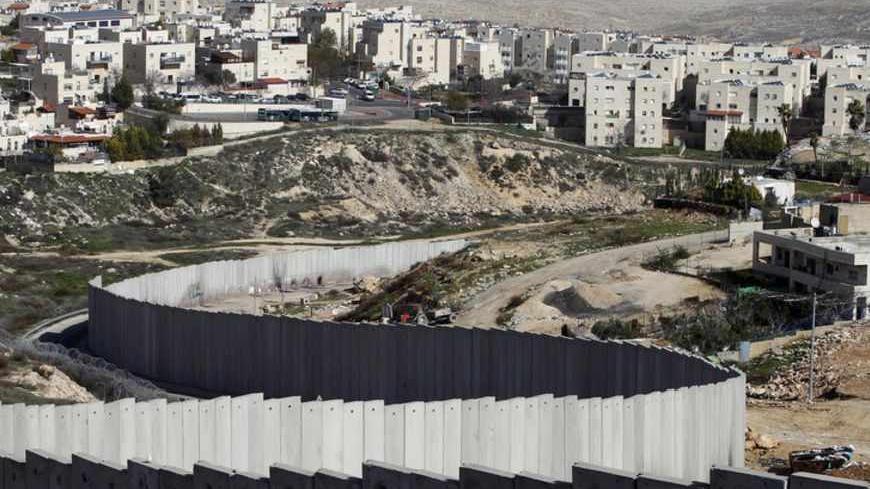 A section of the controversial Israeli barrier is seen between the Shuafat refugee camp (R), in the West Bank near Jerusalem, and Pisgat Zeev (rear), in an area Israel annexed to Jerusalem after capturing it in the 1967 Middle East war, Jan. 27, 2012. - REUTERS/Baz Ratner

Israel has just announced a new policy regarding the rights of Palestinians with ID cards who find themselves living in homes outside the municipal borders of the city, but on the Israeli side of the separation barrier.

’s Attorney General Yehuda Weinstein has ordered an end to the revocation of social welfare rights of these “Jerusalem Palestinians.” The decision affects about 5,000 people, who will once again the enjoy the health and welfare advantages of the coveted “blue identity card” granted to Palestinians living in “east” Jerusalem, an “inseparable” part of Israel’s “eternal capital.”

The extension of Israeli law and justice were extended to east Jerusalem by an Israeli fiat within days of ’s June 1967 victory. The new east Jerusalem established by this unilateral move was half again as large as east under Jordanian rule. It reflected both an Israeli projection of its territorial interests and confidence in its ability to divide and rule over Palestinians living under occupation.

The Palestinians who fit ’s definition of e residency have long enjoyed advantages most other Palestinians living under occupation can only dream about. They can travel unhindered throughout the West Bank, shop in the malls of West Jerusalem, travel to see family in Lod, do business in Jaffa, and enjoy a day at the beach with their kids in Tel Aviv. Since 1990, these elementary, vital pleasures of movement and access have been progressively denied to Palestinians living anywhere but e. Their ability to travel and work, farm their lands or market their produce, is tied inextricably to an ’s arbitrary reflection of its own interests.

The separation barrier built to include the settlements of “greater ” (not to be confused with the “eternal capital”) during the last decade is the most recent case in point. In many respects,  considers the old east Jerusalem border it announced in the heady days after its 1967 victory as passé, and in many legal and administrative decisions is affirming the power of a new border based on the separation barrier.

The 50,000 Palestinians living between ’s old border and the separation barrier never moved, but ’s own vision of its interests has — the latest in an ongoing Israeli effort to redefine and reclassify and divide Palestinians and thereby reduce their control over their personal and national destiny. Palestinians living in Kufr Aqab for example, are residents of according to the June 1967 law, but they live outside what increasingly considers a more significant reality — the separation barrier. They still carry the blue ID card, but in many other ways ’s interest in such places and the power of ’s municipal bureaucracy over them — by controlling unlicensed construction, for example — is receding.

Israel has always viewed Palestinians in its midst as a management problem that can be eased by creating what is in most respects an artificial hierarchy that defines and limits rights and benefits. The complex system of laws regulating Palestinians in Israel itself — notably legislation that established the tens of thousands of IDPs (Internally Displaced Persons) — known in Israel’s legal parlance as “present absentees” without rights to their lands, remains a notable and instructive precedent. This history is one reason why many Israelis are not scared by the idea of annexing the West Bank to . A recent poll by a pro-settlement organization counted 80% of Israelis supporting the extension of Israeli sovereignty over “Judea and ,” including more than a third who favor annexing the entire area including its 2.5 million Palestinian inhabitants.

’s creation of the category of “Palestinians of east Jerusalem,” indeed, ’s creation of an imaginary place called itself, was the first expression of this policy in the occupied territories. The consequences of such moves however, were not imaginary. The international community may consider all of the territories occupied in June 1967 to be indistinguishable and all of its settlements uniformly illegal, but the day-to-day lives of those who must live according to the rules set by argue otherwise.

In the last 50 years, east Jerusalem has become a different place from the . The latter is itself divided and subdivided into a confusing hierarchy of bits and pieces — authorized settlements, illegal outposts, settlement blocs, Greater Jerusalem, regional settlement authorities and firing zones, all of which are in Area C — the 60% of the West Bank set aside in the Oslo Accords for Israeli use and control. Settlements can only be constructed on “state lands” except when they are built on private Palestinian land. Each claim is decided by an Israeli legal system with self-interest in promoting the national settlement project.

The construction of the separation barrier — the  700 km [435-mile] line of concrete and barbed wire that snakes though the — has established an entirely new geographic hierarchy and a honeypot of bureaucratic corruption. Almost 10% of the entire is on the “Israeli" side. Fifty thousand Palestinians live there and tens of thousands more own and farm land. Access and movement for Palestinians are subject to a dizzying series of permits and rules. The number of permits issued by to allow farmers to work land that was cut off by the barrier dropped by 83% from 2006 to 2009 (from 10,037 to 1,640 permits), according to the Israeli human rights organization B'Tselem. During this same period, increased the amount of Palestinian land that remained west of the barrier by 30% to approximately 119,500 dunams [30,000 acres]. There are hundreds of different authorizations, with one unifying, strategic purpose: to undermine the ability of Palestinians to control and exploit their dwindling territorial resources in what is a zero sum contest for control over the land.

Some of these Israeli innovations — the regional settlement authorities, for example — are grounded in Israeli legislation. Areas  A, B and C  are the product of diplomatic agreement with the PLO. Others, like settlement blocks, are as ephemeral as the clouds — without definition or consensus. Each, however, serves a strategic purpose — settlements and the lands they control become more like in law and deed even as their territorial definition remains unclear. Israelis and the Bush and Obama administration have internalized the principle that these “settlement blocks” — which no one can draw on a map — are today a natural part of

Yet from the time of Menachem Begin, even committed supporters of settlement throughout the occupied territories have historically refrained from supporting outright annexation of the because of the large number of Palestinians residing there. Instead, as Moshe Dayan advised, preferred to rule “without a solution.”

This consensus may be changing. “We call on the Israeli government to listen to the voices rising from the people,” noted settlers encouraged by the poll showing popular Israeli support for annexation. “The government has a golden opportunity to show a truly Zionist pioneering spirit and to lead the people a step forward on its way to political and security salvation. The extension of sovereignty is today a necessity that can be done with determination and courage. The people have sobered up from the two-state illusion and it is searching for a real, ethical and Zionist solution, and a solution of that sort is without doubt the extension of Israeli sovereignty over the cradle of Jewish history, Judea and .”

Such views are growing in today’s atmosphere of diplomatic stalemate, in tandem with efforts to create complementary “facts on the ground” that any diplomatic solution must accommodate.

Slicing and dicing up and Palestinians into digestable bits is a central element in this strategy, and lends new and malignant meaning to the policy of “divide and conquer.”