Will Israel annex the Jordan Valley?

Instead of entertaining his fantasies about settlement blocs in the West Bank and the Jordan Valley, President Donald Trump should try to bring Prime Minister Benjamin Netanyahu down to earth to an agreement on two states for two people. 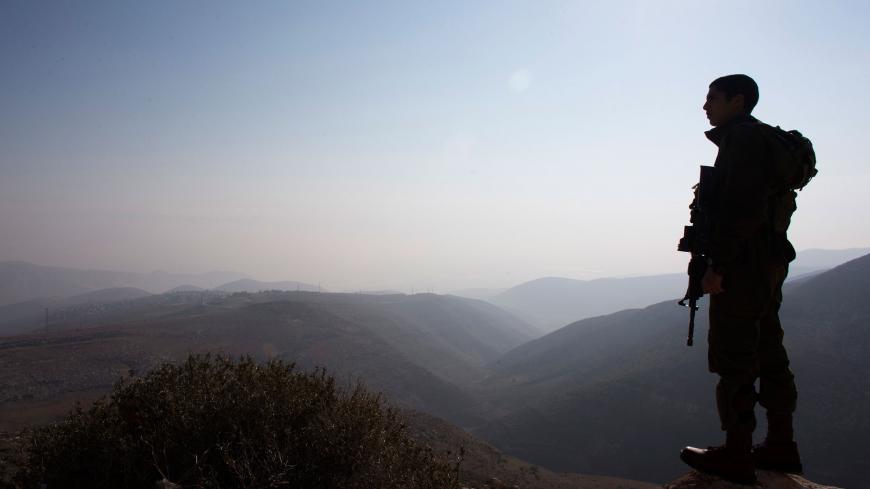 An Israeli soldier stands guard during a tour made by Israeli members of parliament of the Jordan Valley, near the Jewish settlement of Ma’ale Efrayim, Jan. 2, 2014. - REUTERS/Ronen Zvulun

No one is holding their breath in the prime minister’s office in Jerusalem or in the Palestinian Authority headquarters in the West Bank city of Ramallah ahead of the expected presentation of US President Donald Trump’s “ultimate deal” between Israelis and Palestinians expected shortly after the holy Muslim month of Ramadan.

The US deal is supposed to focus on resolving the status of the lands Israel captured in the 1967 Six Day War on its eastern front. But a schism lies between the opening positions of Israelis and Palestinians, which has widened during the long years of stalled negotiations between them. The Palestinians insist negotiations be based on the armistice line with Jordan drawn up in April 1949 following Israel’s War of Independence, to which the sides adhered until June 5, 1967. The Palestinians claim that after being forced to give up 78% of Mandatory Palestine to make way for the establishment of Israel, they should get the remaining 22% that Israel conquered in the 1967 Six Day War. Israel’s ruling party, the Likud, objects to the very idea of establishing a Palestinian state. The political center and the center-leaning left are willing to make do with “settlement blocs” in the West Bank that would remain in Israeli hands.

Reportedly, the term “settlement blocs” came up often in talks held by the Trump administration’s peace team, led by special envoy Jason Greenblatt, with Israeli politicians and experts. An array of plans can be found in newspaper archives and on the sites of various think tanks, suggesting the annexation to Israel of settlement “blocs” according to different permutations. The common denominator of all these plans is the disregard of Palestinian aspirations. For example, on May 25, Knesset member Eitan Cabel of the center-left Zionist Camp wrote an op-ed in Haaretz calling to jettison the 1993 Israeli-Palestinian Oslo Accord. Cabel wishes to impose Israeli law on East Jerusalem, the Etzion settlement bloc, the settlement town of Ma'ale Adumim, and the Karnei Shomron settlement bloc and town of Ariel in the heart of the Samaria region of the West Bank, and to maintain control of the Jordan Valley. No wonder Naftali Bennett, chair of right-wing HaBayit HaYehudi, embraced the proposal with alacrity.

Michael Bar Zohar, who represented Labor in the 10th and 12th Knesset (1981-1984 and 1988-1992, respectively), also opined recently in Haaretz that Israel should unilaterally annex the Jordan Valley, which constitutes almost 30% of the West Bank. Bar Zohar, a biographer and friend of the late President and Nobel Peace Prize laureate Shimon Peres, proposed “redrawing a de facto new border, which would be the new border of the State of Israel and will be defended by a wall or a fence.” Labor Party Chair Avi Gabbay dismissed the proposal to annex territories outside the framework of an agreement with the Palestinians but underscored that “clearly, the blocs will remain under our control.”

Gabbay, too, is loath to deal courageously with the territorial issue. He does not dare say that the Palestinians would never agree to leave the Jordan Valley under Israeli control. Hard to believe that the leader of the country’s main opposition party does not know the Jordan Valley makes up almost one-third of the West Bank and constitutes the only viable land reserve for housing Palestinian refugees and building an international airport for a future Palestinian state.

To avoid the “settlement blocs” in general and the Jordan Valley in particular turning into intractable issues, Trump should read the 2004 letter by President George W. Bush to then-Prime Minister Ariel Sharon. Bush was the first American president who officially supported territorial annexations to Israel. The letter, endorsed by both houses of Congress, said, “In light of new realities on the ground, including already existing major Israeli populations centers, it is unrealistic to expect that the outcome of final status negotiations will be a full and complete return to the armistice lines of 1949.” Bush made it clear that this needs to be "part of a final peace settlement" — i.e., not a unilateral Israeli decision.

The phrase “major Israeli population centers” automatically precludes the Jordan Valley from the list of “settlement blocs.” Fewer than 10,000 Jews live in the area’s 22 collective farms and kibbutzim. Only two settlements number more than 1,000 residents. According to data in a recent Hebrew-language study tracing the history of the Israeli settlements by Shaul Arieli, a leading expert on the Israeli-Palestinian issue, negative population growth was recorded in at least six of the settlements in 2015.

In addition to taking into account the Israeli settlement centers in the occupied territories, Bush noted in his letter that Israel should have recognized and secured borders in accordance with UN Security Council Resolutions 242 and 338. Even before Israel controlled the West Bank, during the 1967 war, it took the army less than four days to reach the border with Jordan and capture the territory, including East Jerusalem. Even before Israel signed a peace treaty with Jordan in 1994, its eastern front was Israel’s most secure and calm border, even during the 1973 Arab-Israel war, which Jordan sat out. This is doubly true now that the Israeli flag flies in the Jordanian capital of Amman over the embassy building. Not only that, in negotiations over the years on a permanent arrangement, the Palestinians agreed to an international presence in the West Bank and on the border crossings with Jordan.

For 51 years, Israel has tried in vain to create irreversible demographic facts in the West Bank and East Jerusalem by settling Jews there. Rather than fantasizing with him about pie-in-the-sky settlement blocs, Trump should bring Netanyahu down to earth to an agreement on two states for two people based on the June 4, 1967, lines and on agreed land swaps. This should be the Palestinian starting point in reaction to Trump’s much-touted peace plan. The alternative is not a DIY border demarcation project and annexation of settlement blocs by popular demand. The death certificate of the two-state solution would signal the birth of an apartheid state solution — with Israeli Jews ruling over the land between the Mediterranean Sea and the Jordan River.