Social media is playing a vital role in the current Palestinian protests. 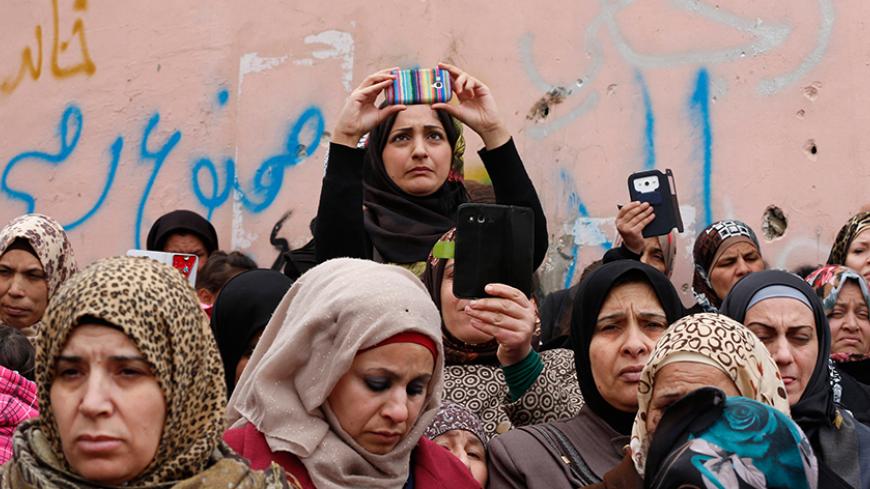 Palestinian women take pictures on smartphones during the funeral of a Palestinian man in the West Bank city of Bethlehem, Feb. 24, 2015. - REUTERS/Ammar Awad

Every revolution seems to have perfected or made particular use of a technological advancement. The current series of protests begun by Palestinian activists Sept. 13 is no exception. Social media via smartphone appears to be the flavor of the month in modes of communication, due to the ease it offers for instantly uploading video.

Danny Qumsieh, owner of the radio station Mawwal FM in Bethlehem, believes that the availability of high-quality mobile video cameras has made a huge difference. “Now everyone is involved in taking videos, positing them and sharing them with as many people as possible,” Qumsieh told Al-Monitor.

Mamoun Matar, a leading Palestinian broadcasting engineer, observed that technology has allowed many more people to take part in the ongoing Palestinian national struggle, stating, “Everyone has a mobile device or a laptop, and those who can capture photos and videos, and the rest work in the backrooms to edit and circulate the powerful images around the world.” Matar pointed out that young activists today are doing much of the work that traditional broadcast media used to do. This is unlike the second intifada that began in October 2000, when Al Jazeera and other Arab and regional satellite stations actively covered Palestinian protests. “Not this time,” said Matar. “They are busy with violent events in Yemen, Syria, Iraq and Libya, so they are not giving Palestine as much attention as before.”

Khaled Abu Aker, director of Amin, one of Palestine’s first news websites, told Al-Monitor that for the first time, Palestinians no longer need traditional media. He said, “During the first and second intifada, we used to get calls asking the media to come and cover events. Today, the youth are doing the broadcasting themselves.” One entrepreneurial media outlet, however, has been providing the live TV coverage that many Palestinians and their supporters seek. Technicians from the Palestine News Network posted a camera near the main location of protests in Bethlehem and was able to live-stream scenes from the protests.

Ahmad Buderi, a veteran Palestinian journalist, observed that while most people around the world use social media to share family pictures and videos, Palestinians put it to a totally different use. “In Palestine, especially during times of tension, social media becomes a political platform, often reaching the status of political mobilization,” he told Al-Monitor.

Buderi, who worked for the BBC and various regional TV networks, commented on how leaders and politicians also use social media for their own purposes. “What is unusual is that political leaders aggregate various powerful videos and then write commentary that reflects their own ideological point of view,” Buderi said. He argues that ideological and political leaders use this method because of the weakness and restricted nature of the local media, and because they want to reach youths on the front lines of protests.

During the first intifada, which began in 1987, the main tools of communication were fax machines and the printing press. This time around, neither is being used.

“In the previous protests, the Israelis tried to track fax communications and looked for the printing presses on which the underground leaflets were printed prior to their distribution. Now it is all technical on both sides,” Buderi explained. He also pointed out that the use of technology is not restricted to the Palestinians, of course. The Israeli military and intelligence services today are also using high-powered tools to monitor and identify protest leaders.

The videos from the protests that are going viral tend to fall into one of three categories. Some of them record clashes between Israelis and Palestinians. A video recorded moments after a stabbing attack in the Old City of Jerusalem Oct. 3 was posted on the same day and received more than 142,000 hits on YouTube. Other videos document the Israelis' use of excessive force against Palestinians. CCTV footage recorded Oct. 7 at a supermarket in the Jerusalem neighborhood of Abu Tor shows Israeli security forces following a Palestinian boy into the store, roughing up the child and beating the shop owner. More than 624,000 people have viewed the two-minute clip.

Perhaps the videos viewed the most are those that document simple acts of courage by Palestinians. A video recorded Oct. 10 shows an unarmed elderly Hebron man verbally confronting well-armed Israeli soldiers and trying to force them through sheer determination to leave the area. More than a million people have viewed this video, filmed by Bilal H. Altaweel, a young Palestinian photographer from Hebron. Videos and photos are also highlighting the marked increase in the number of young Palestinian women participating in the protests, a new phenomenon.

The 1979 Iranian revolution featured the widespread use of audiocassette tapes to spread the word, and the first intifada harnessed the power of faxes to disseminate instructions among the public. Today’s Palestinians are using social media to broaden support for their cause and to communicate among themselves. In all these cases, however, technology alone does not make the rebellion. People do, with an assist from technology to inform and encourage within and beyond a movement.