As the date to move Palestinian TV frequencies from analogue to digital is approaching, concerned parties and ministries are worried about potential issues including interference by Israeli authorities and costs for poorer families. 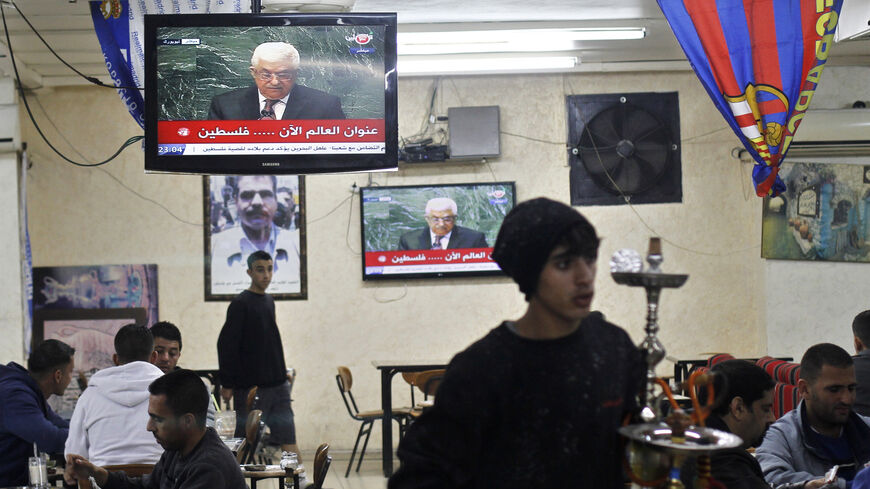 Palestinians sit in a cafe, as Palestinian President Mahmoud Abbas is seen on a television, in the West Bank city of Ramallah, Nov. 29, 2012. - REUTERS/Mohamad Torokman

For most Palestinians, July 17, 2015, means very little. But for those who have long been working toward the migration of all Palestinian TV frequencies from analogue to digital, the date has been etched in stone. Mandated by the International Telecommunications Union and approved by the Arab League, all Arab states agreed in 2006 to turn off the analogue TV signals by this date.

In Palestine, the move toward digital broadcasting was preceded by a move to local television broadcasting. Shortly after the Oslo Accord began to be executed, there was a rush to establish local radio and TV stations especially in the cities from which the Israeli army withdrew. At one time, more than 31 local television broadcasting using terrestrial frequencies spread throughout the occupied territories. Nablus, Palestine’s largest city, had the record for having nine local television stations in 1996. However, by 2010, the number of stations was down to 18 local stations and in Nablus down to four. In time, some of these small stations folded or merged into networks such as the Maan TV network, which has become a national community-owned TV station.

As the target date approached, a frenzy of movement took place on various levels. The Palestinian Telecommunications Ministry produced a 12-page strategy paper that ended with the establishment of a large governmental committee that was mandated to prepare for the migration from analogue to digital. The supervising committee included representatives of relevant ministries including telecommunications, interior and information as well as a representative of Palestine TV, and one representing local TV stations. Birzeit University’s Media Development Center held a number of discussions on the topic and will be producing a detailed report on the topic by mid-May 2015.

The move to digital television also attracted the attention of international media organizations. The US-based Internews Network dedicated time and effort to help raise the level of awareness of the move to digital through workshops and conferences. Mamoun Matar, a professor of digital media at various Palestinian universities who participated in many of these meetings, told Al-Monitor that great effort was made to ensure that poor local TV stations are not stomped on with the big money move toward digital. “We wanted to make sure that community-based television stations are part of the discussion and that their interests are represented,” he said. Matar expects the first batch of 12 digital stations to include all public service stations as commercial and a couple of community-based university stations.

Usama Abed, a senior official at the Palestinian Ministry of Information in charge of stations’ licensing, said great effort was made to make the migration to digital broadcasting an inclusive one. “From day one we included a representative of local TV stations and we made sure that they will be able to join in the digitizing effort,” he told Al-Monitor. Abed said that tenders for the final stage of the digitizing effort will be announced in the coming week and expressed hope that Palestine will indeed meet the deadline for the migration to digital so long as Israel doesn’t intervene.

Turning off analogue broadcasting will cause some hardship to Palestinian owners of old TV sets that don’t include the ability to bridge to digital broadcasting. Matar and Abed acknowledge the problem but said that the Palestinian government will not be able to provide coupons for Palestinians to be able to buy the converter. “Since most Palestinians are already watching TV using satellite dishes, the likelihood is that their TV set can accept the digital signal,” Matar said.

One of the biggest advantages of going digital will be that the current spectrum will be freed of frequencies that can have other usages. Matar, who worked on the report, listed to Al-Monitor some of the benefits from this digital return. “It will allow for the use of 4G technologies for local cellphone companies and therefore allow us to skip the problems over 3G, which Israel is refusing to give to the Palestinian cellphone companies using the excuse that the frequency spectrum for 3G is already full.”

Abed, who is also responsible for TV licensing at the Ministry of Information, is worried that Israel will not allow this transition to go smoothly. “While we are technically prepared to make the move to digital broadcasting, we can’t predict what the occupation authorities will do.” Abed said that a joint Israeli Palestinian technical committee mandated by the Oslo Accord to deal with frequencies issues hasn’t met for years. International Telecommunications Union representatives have been giving advice and support to Palestinians as they prepare to migrate to digital television broadcasting.

While the various Palestinian ministries are trying to deal with the technical challenges of going digital, it's hard to predict how successful the effort will be on the public level. Palestinians, like most of the population in the Middle East, are extremely dependent on free satellite broadcasting. Terrestrial digital broadcasting will allow companies a variety of usages including mobile and specialized television coverage of sports, health and other areas. But experts are worried that without a significant improvement in the quality of content on the digital channels, it's unlikely that people will access these new digital stations.

Abed, the Ministry of Information official, told Al-Monitor that the ministry is aware of the challenges and will not add to the financial burden of local community-based television stations through added and expensive license fees. But with a weak Palestinian economy, it is unknown whether even commercial stations will be able to find the needed commercial revenue to make the digital move successful. The debate for some of these stations is now focused on the financial cost of connecting to the Ramallah hub. According to Matar, this can cost $1,200-$1,800 using fiber optic connections or much less for the stations in Ramallah, which might be able to connect using microwave links.

As the date for migration to digital approaches, Palestinian public, private and community media are apprehensive to see whether this change will bring about a revitalization of the audiovisual sector or if this will push Palestine back even further as a dependent rather than an independent player in the local and regional media landscape.