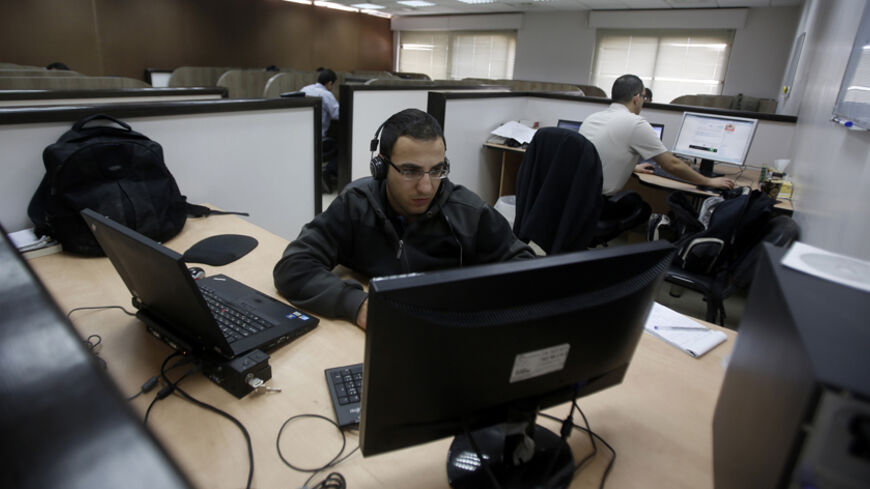 Employees work on computers at Exalt Technologies, a company that deals in research and development outsourcing from Cisco and French-American group Lucent-Alcatel, in the West Bank city of Ramallah, April 7, 2013. - REUTERS/Mohamad Torokman

The opening ceremony of Expotech 2014 at the Ramallah Cultural Palace on Nov. 9 was a sellout. Under the theme “intelligent cities,” a week of technological-related events are taking place in Ramallah and Gaza — via video conference — with the aim of discussing, planning and networking one of Palestine’s most ambitious information technology projects.

Ramallah Mayor Musa Hadid promised the attendees a city that will be totally covered by a Wi-Fi network as a direct response to the Israelis refusing to allow Palestinian mobile companies to provide 3G and 4G to its customers.

A special bulletin prepared by the Palestine Economic Policy Research Institute (MAS) for the Portland Trust concluded that the ICT sector is a strong contributor to the overall economy: “For each new worker employed in the ICT sector, three employment opportunities are created in other sectors that support the ICT sector.”

US-trained Palestinian information technology (IT) specialist Ala Alaeddin, chairman for four years of the Palestinian Information Technology Association (PITA) until 2011, told Al-Monitor that one of the main driving forces behind the success of the Palestinian ICT sector has been the restrictive political circumstances. “I remember during the second intifada that Palestinians in the West Bank were using the Internet for practical reasons like checking their bank balances or paying their utilities online long before it became popular in other countries simply because of the troubles and dangers of movement.”

Alaeddin said that initially, most of the money coming into this sector was grants and donations, but he credits the big jump in ICT usage to the risk that Cisco President John Chambers took in February 2008 to invest $10 million in Palestinian ICT.

Alaeddin recalled how Palestinian IT activists heard that Chambers was in the region and arranged to have him come to Ramallah to meet with President Mahmoud Abbas. Sabri Saidam, a former minister of telecommunications and currently a special adviser on IT to the president, recalls that Chambers told Abbas that he was proven wrong when he had belittled the Jordanian IT market.

“Mr. President, I give you $10 million to invest in telecommunication and IT. I hope Palestine will prove me wrong, like Jordan.” Zika Abzuk, a social investment manager of Cisco, said in August 2012. “The Palestinian ICT sector is on the verge of developing into an innovative high-tech industry and has the potential to become the engine of the Palestinian economy.”

Murad Tahboub, CEO of Asal Technologies in Ramallah, explained to Al-Monitor the reason behind the success of Palestine's IT sector: "We have well-educated human resources with 11 accredited universities putting out 2,000 IT graduates a year, stable electricity and a strong fiber-optic Internet backbone.”

Tahboub, whose company employs 130 Palestinians, also works with programmers in Gaza, whom he called among “the most talented” in the region. But Tahboub complains that while most of the initial success has been with regional and international companies, many now get cold feet because of the political situation and worry about working with companies in what they perceive as a war zone.

While some IT entrepreneurs want to distance themselves from politics, others feel that they can do a lot with media. Saed Karzoun, a journalist who has tried to combine public service with the potential of social media, was recently nominated for the Hult Prize. Annual Hult Prize winners can make their ideas a reality with the help of $1 million in seed funding. Karzoun's idea, You Know, aims at empowering the public, and particularly journalists, to access information.

Karzoun told Al-Monitor that his focus is on the merger of two fields. “Our efforts through the new NGO Tageer is to combine media with IT and to help NGOs through training and strategic planning to reach the audiences they want with their messages.”

Another project in the same field has been Busmati, a media project that uses colloquial Arabic to communicate to the young people of Palestine, who are the majority of the population.

Karzoun, a recent graduate of Bir Zeit University, is considered part of a second generation of media IT entrepreneurs. He follows successful early projects such as AMIN, the Arabic Media Internet Network, established in Jerusalem in 1996 in association with Internews Network to combat censorship in the Arab press.

Alaeddin, now a board member of PITA, is concerned that Palestinian ICT might be reaching its maximum unless they can find another major push like that offered by Chambers. “Most of our success has been the result of an individual effort, we must now move to a more institutional national effort that can plan and implement a successful ICT strategy,” he said.

The need for a national strategy has been the focus of Hasan Omar, the executive director of PITA. Omar understands that mobile companies bring in money in licensing fees to the cash-strapped Palestinian coffers, but argues that the IT sector provides jobs and supports the national economy. “We need a national strategy, and a strong regulatory body,” Omar told Al-Monitor on the evening of the first day of Expotech 2014.

Omar concluded, “We need a much more focused national policy to give this sector the kind of push it needs to become the leading economic engine in Palestine.”