Palestinian media has failed to articulate an alternative narrative to the crisis with Israel, often relying on Israeli sources to write reports, following the killing of three Israeli youths and a Palestinian teen. 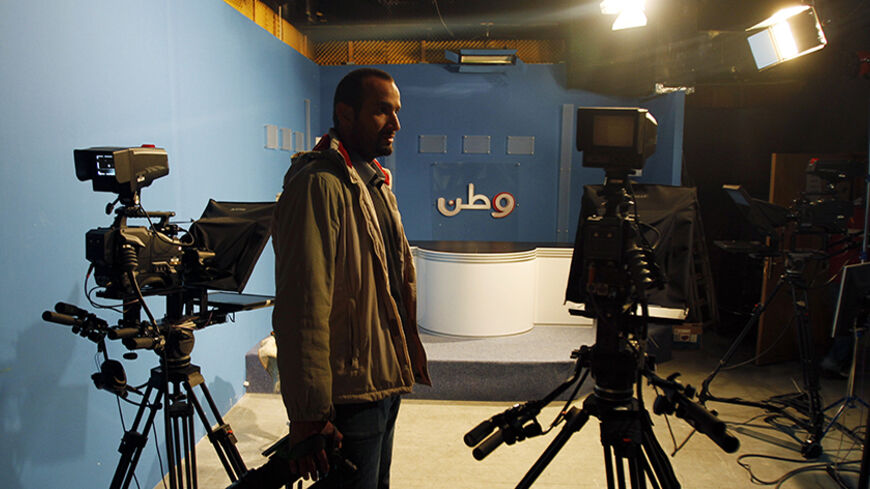 GAZA CITY, Gaza Strip — Palestinian local media outlets — including radio stations, news agencies and newspapers — have struggled to cover the fast-paced events on the Palestinian territories since the kidnapping and murder of the three Israeli settlers in mid-June to the current Israeli escalation in the Gaza Strip. So far, quick reporting and live interviews on the ground have prevailed over published materials. Amid a lack of deep analyses of the events, a scarcity of information and an absence of expectations, many news agencies and newspapers are relying on Israeli sources, and are thus failing to articulate an alternative narrative of the events.

The absence of the human story, the reliance on statistics of deaths and injuries, the dissemination of photos of bodies and the limited number of officials who can be reached for comment, either in the West Bank or Gaza Strip, affect the issuance of a complete Palestinian side of the story. They also preserve the state of confusion that has characterized local media since the three settlers were abducted on June 12, and found killed, and after the burning and killing of Mohammed Abu Khdeir by Israelis, two of whom were settlers, in Jerusalem on July 2.

Palestinian coverage has also been hampered by the politicized tit for tat between Hamas and Fatah-affiliated media outlets. For example, on July 4, the victims of the clashes between Egyptian security forces and the Muslim Brotherhood was front-page news, despite the current volatile situation in the West Bank and Gaza Strip.

While Al-Hayat Al-Jadida and Al-Ayyam, two newspapers published in Ramallah, ignored the tension in the Palestinian street and the escalating criticism of Palestinian President Mahmoud Abbas because of his remarks on the security coordination with Israel, the pro-Hamas Al-Resalah and Felesteen newspapers attacked the president by using innuendo in their headlines: “The young boy Abu Khdeir, a victim of human beings in Quds [Jerusalem],” in reference to the president’s speech describing the settlers as human beings.

In a news item on its front page, Al-Resalah wrote, “Al-Habbash is persona non grata in Palestinian society,” referring to the expulsion of chief Judge Mahmoud al-Habbash from Al-Aqsa Mosque. He is known to be close to Abbas.

Perhaps this media rivalry prompted Al-Hayat Al-Jadida, the official newspaper of the Palestinian Authority (PA), to step up its anti-Israeli rhetoric. On July 4, it used the word “terrorists” to refer to Israeli settlers in its headline, “Terrorists try to kidnap a child and a citizen, and wound a young man with bullets.”

A lot of breaking news and news reports are posted by local online news agencies, such as Media 24, Safa, Sawa, Sama, Falastin Al-Youm and Maan. Unlike the print media, web media is not obviously partisan, although they do have affiliations.

Naela Khalil, a journalist in Ramallah, told Al-Monitor, “The ordinary citizen is lost among the media owned by the PA, partisan media and the media of editors who ride the president’s plane and thus cannot criticize his performance,” arguing that “coverage for the most part was lukewarm, [strictly reporting the] news and without any meat, and didn’t carry the true spirit of the revolt of the people of Shuafat and Jerusalem. This made the citizens turn to international or Israeli press. … Can you imagine that the spokesman for the security services in the West Bank refused to talk to or deal with some local journalists and incited against them, while he gave statements to Israeli media?”

In the same vein, Gaza-based journalist Fathi Sabbah told Al-Monitor, “Palestinian media was a recipient and not a producer of news since the three teenagers disappeared, and most of its information came from Israeli sources because there were no clear Palestinian reactions about what was going on.”

A journalist from Jerusalem who works with an international news agency, whose name she did not mention in accordance with the agency’s policy, told Al-Monitor, “Palestinian media copied from the agencies, and rarely gave special reports on anything that was happening, such as the collective punishment by the Israeli occupation, which human rights institutions [covered].”

For her part, Khalil explained, "The local media avoided to a large extent mentioning the tension that the people of the West Bank and Jerusalem accumulated against both the PA and the occupation. … For example, we didn’t see the news about the expulsion of Jerusalem Gov. Adnan al-Husseini from the house of mourning in local newspapers not affiliated with Hamas. Also, no one criticized the weak role of the PA in protecting citizens from attacks by settlers.”

Sabbah agreed, saying, “It seems that our media is scared of retaliation from Israeli or PA security, which destroyed and confiscated the cameras of journalists in the West Bank.”

About the accuracy of the terminology, Sabbah told Al-Monitor, “At the beginning of the crisis, when settlers disappeared, I used the term 'abductees' and wrote 'those whose traces disappeared.' We didn’t know if the operation had a criminal or nationalist background.”

Khalil said, “Palestinian media acted somewhat in self-defensive. … It also failed to choose [proper] terminology. Some called them [the three kidnapped youths] soldiers. Some called them settlers without mentioning the nature of settlement activity and land theft. Some called them the kidnapped, while all Israeli media called them teenagers and youths. … The local media was very superficial in its coverage of the events and only published the numbers of wounded, prisoners and martyrs without including the stories behind these numbers.”

Salim al-Bek, an Arab writer and observer of Arab media, said from France that the “coverage was not up to scratch, not just locally but at the Arab [level], too,” pointing out to Al-Monitor, “All Arab media coverage of the recent confrontations in Shuafat as well as the Israeli bombardment of Gaza was subject to overlapping considerations, the basis of which were the political positions of the sponsoring, financing or owning regime of this or that media outlet — the most influential among them, as always, are the TV channels.”

Palestinians who do not affiliate to Hamas or Fatah will struggle to find local media outlets that keep abreast with the daily scene of hundreds of masked youths who are knocking the doors of a third intifada in Jerusalem’s neighborhoods, while Gaza faces another Israeli onslaught.